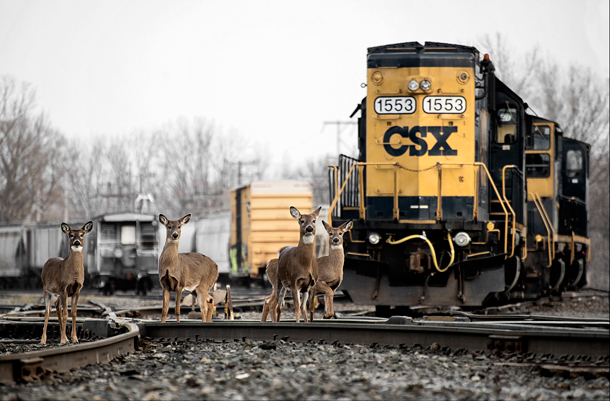 Untold numbers of animals, both big and small, from elephants to frogs, are killed on railroad tracks each year. One proposed solution is to play predator sounds near tracks. (Photo: Timothy Vogel, Flickr, CC BY-NC 2.0)

Looking beyond the headlines, Peter Dykstra talks with Host Steve Curwood about an unexpected wildlife killer of creatures big and small: trains. They then discuss rising tourism to the world’s melting glaciers, as well as the fiftieth anniversary of the founding of Hudson River Sloop Clearwater, a nonprofit floating lab and classroom founded by Pete Seeger to preserve the Hudson River through education, advocacy, and—of course—musical celebration.

CURWOOD: Let's take a peek behind the headlines now with Peter Dykstra. Peter's an editor with Environmental Health News, that's EHN.org and dailyclimate.org. On the line now from Atlanta, Georgia; hi there, Peter. How are you doing?

DYKSTRA: Well, I've been working through a little cold, but bear with me. We've got some interesting things to talk about. Starting with railway collisions with wildlife, from elephants to grizzly bears to even small frogs that are too fat to jump over the rails, we're beginning to understand how big the problem is. One little fact in a field that doesn't really have many numbers attached to it yet: over the last 30 years on Indian railways alone, 220 elephants have been struck and killed by trains.

CURWOOD: So that means almost an elephant every month or two gets killed by a train there.

DYKSTRA: Right. Those have to be pretty messy collisions, in addition to impacting a population that doesn't need any more negatives.

CURWOOD: So of course, a railway creates an edge habitat, right? I mean, whenever the rail line went up, there's this little area that's right next to it that goes, you know, way back in the day and animals like.

CURWOOD: So what's to be done? I mean, we just heard about the precipitous decline in wildlife thanks to development and climate disruption. There must be something that could be done.

DYKSTRA: They’re trying a few things in a few places around the world. There are recordings of predator noises being played near railroad tracks, hopefully to scare away animals that might fear being eaten more than they fear being hit by a train. Airports in a lot of places use sound cannons, little blasts to scare away Canadian geese and other animals that could tend to get stuck in jet engines. We don't know how big the problem is. We're beginning to get a grip on it. And solutions need to come soon, because it's potentially a major impact on wildlife. 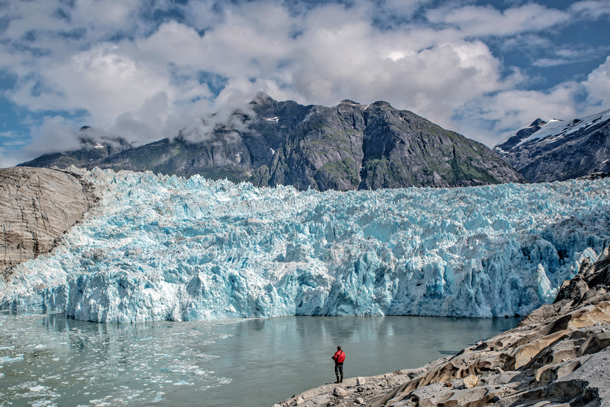 As glaciers melt, tourists flock to see the icefields before they’re gone. Pictured here is Alaska’s LeConte Glacier expanse, which—like so many glaciers around the world—is disappearing. (Photo: Carey Case, US Forest Service, Flickr, CC BY 2.0)

CURWOOD: Hey, what else do you have for us today Peter?

DYKSTRA: Well, there's an unusual increase in tourism: people flocking to see melting glaciers before the glaciers are entirely melted away. There's a big boom in Montana in Glacier National Park where many of the glaciers are already gone and the rest are going quickly. Places like Kilimanjaro; the Alps; folks are going out to see something that may not be there for long. I kind of did the same thing with my kids back in 2005. On a trip to New Orleans, I took them out to Grand Isle, the one beach town left in southern Louisiana, because I wanted to have them see a place that would be doomed by hurricanes. The irony is that Grand Isle is still there, and a lot of New Orleans disappeared six months later. It's kind of a reverse bucket list. Instead of seeing a place before you die, you see a place before it dies.

CURWOOD: Indeed, if we keep going the way we are, there are going to be a lot of places like that.

DYKSTRA: Right, there's a double-edged sword with the glacier tourism, though. There's more business, there's more climate change awareness when people go out to see vanishing glaciers. But at the same time, if you're increasing plane travel, or car or bus travel, just to see the glaciers, you're actually contributing to their death.

CURWOOD: If you're putting more carbon into the atmosphere, certainly. Alright, it's time for us to take a look back in the annals of history and -- tell me what you see. 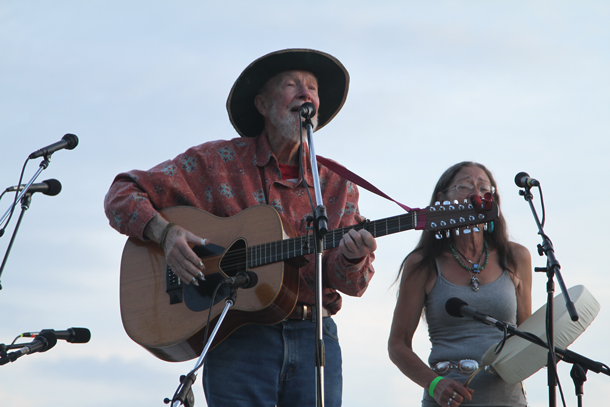 DYKSTRA: A 50th anniversary of note: Pete Seeger and some other volunteers launched the Hudson River Sloop Clearwater on May 17th, 1969. And for 50 years, the Clearwater has sailed up and down the Hudson River, other waterways and ports along the Northeastern US. It's a floating lab and a floating classroom on saving waterways. And it's been a symbol of the great comeback of the Hudson River for the past half century.

CURWOOD: But all is not well with the Hudson River yet though, is it?

DYKSTRA: No the PCB dumping that was the Hudson's biggest problem still isn’t resolved and believe it or not, the EPA just gave a pass to General Electric, PCB dumper back to the 1940s and earlier, to not continue with their cleanup. It's a setback. It's proof that not only does the Clearwater have more work to do, but other organizations it helped to spawn, like the Riverkeeper. The first Riverkeeper was started by a Clearwater crew member named John Cronin and also Bobby Kennedy, Jr. There are now Riverkeeper and Baykeeper chapters all over America and all over the world.

CURWOOD: This sounds largely like a success story, Peter. Thank you for reminding us of that. Peter's an editor with Environmental Health News, that’s EHN.org and dailyclimate.org. And we'll talk again real soon.

DYKSTRA: All right, Steve, thanks a lot. We'll talk to you soon.

CURWOOD: And there's more on these stories on our website, loe.org.


The Revelator | “Death by Rail: What We’re Finally Learning About Preventing Wildlife-train Collisions”