Remembering the Legacy of Jim Fowler 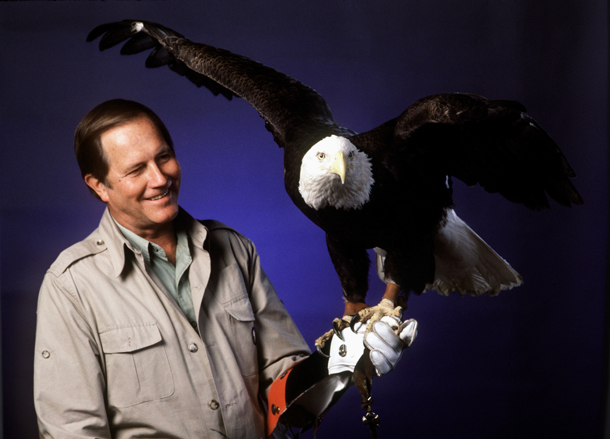 Jim Fowler, Naturalist, conservationist, Tonight Show with Johnny Carson regular and and star of the Mutual of Omaha's Wild Kingdom, passed away May 8, 2019, at the age of 89. His years of bringing animals to American television helped educate viewers across the country about the importance of conservation. Host Steve Curwood recalls Jim’s influence on his own life, and reflects on his enduring legacy.

CURWOOD: Earlier this month we heard the sad news of the passing at age 89 of Jim Fowler. Now if you’re old enough you might remember Mutual of Omaha’s Wild Kingdom, with Marlin Perkins and Jim. These days of course there are wild animal programs on cable TV 24-7, but back in the 1960’s and 70’s, with only three national networks, wild animal programming was as rare as some of the animals Jim and Marlin presented. They had fun debunking myths like Groundhog Day and snake charming, and they took expeditions to show viewers the gentle side of gorillas, the desert-savvy leopards of the Kalahari and the prehistoric-looking Komodo dragons. And they helped people understand why we needed an Endangered Species Act. Marlin Perkins died more than 30 years ago, but Jim Fowler kept keeping on, not just on Wild Kingdom but also on Animal Planet in his later years. And Jim was probably most famous for his dozens of appearances on the Today Show and Merv Griffin, as well as the Tonight Show with Johnny Carson and Late Night with Conan O’Brien. And without being disrespectful to the animals he brought on the set, he rolled with the comedy of those shows.

By the way, I looked up to Jim Fowler, not just because he was six feet six but also because he was an alum of my high school -- Westtown School outside Philadelphia -- and many times brought critters like snakes, owls and foxes to school assemblies. I could also see him up close when he would visit his brother and my mentor, Westtown teacher and playwright Earl Fowler.

What I remember best about Jim Fowler, aside from some belly laughs while watching him and his creatures on TV and stage, was his constant reminder that we need to take care of all of nature, because it takes care of all of us.


More about Jim Fowler and his time with Wild Kingdom

The New York Times | “Jim Fowler, Naturalist and a Face of TV’s ‘Wild Kingdom,’ Dies at 89”