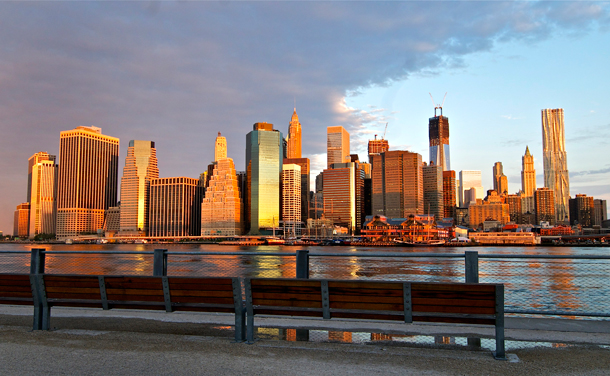 New York City has taken a major step for climate protection by passing a series of laws that will reduce carbon emissions from the city. The centerpiece of the Climate Mobilization Act puts skyscrapers and other buildings of over 25,000 square feet on a low-carbon path, requiring them to cut emissions 40% by 2030 and 80% by 2050. John Mandyck is the CEO of the Urban Green Council, which helped develop the legislation, and joined Host Steve Curwood to discuss how these buildings can meet those benchmarks.

CURWOOD: Congestion pricing will likely reduce greenhouse gas emission in New York City, but the biggest emitters are buildings, and a new ordinance requires large buildings to cut their emissions by 40% in 2030 and 80% in 2050. John Mandyck is CEO of the Urban Green Council, which promoted this ground-breaking legislation, and he joins us now. John, welcome to Living on Earth!

CURWOOD: Briefly summarize for me the Climate Mobilization Act.

MANDYCK: Well, the main center point of the Climate Mobilization Act is a showcase bill that will reduce carbon emissions in large buildings in New York City 40% over a 2005 baseline. So, there's some progress that's already been made. In reality, what has to happen over the next 11 years is a 26% reduction, which is very, very significant in itself. In essence, it will deliver the largest carbon reduction in the history of New York and in the history of any city in the world, given the scale of buildings that we're dealing with in New York City.

CURWOOD: Under this law, how are buildings expected to meet this target?

MANDYCK: Well, the law sets a really tough cap on building emissions, and they do it through 10 different building types. So if you fall into one of those 10 building types, you have a specific cap that you have to meet. So building owners really have six ways that they can meet the new requirements, they can lower carbon emissions. They can switch their fuels, so if they're using oil, they could switch to natural gas or something else. They could buy renewable power, which is an offset that's allowed in this bill. They can buy an additional offset yet to be defined. They could potentially trade carbon, which is a big part of the bill and the new law, that Urban Green worked to have included, it's a new study on how we could trade carbon in New York. And the sixth item is they could just pay the fine, but the fines are enormous, they're $268 per ton over the cap. So if you're far over the cap, you could face fines in the millions and millions of dollars.

CURWOOD: So, tell me how does the carbon trading aspect of this bill work?

MANDYCK: Well, what the law requires is that the city conduct a study and implementation plan for how carbon trading could work in New York City. And they have to do that by 2021. So this is an accelerated timetable. And we're really excited about this particular aspect of the new law, we worked very hard to have it included, for several reasons. First, carbon trading will make meeting the really tough caps in this law more feasible. And in essence, if you're a large portfolio owner in New York City, of which there are many, you blend your average to meet the new law, because you trade between yourself. So that's an important mechanism. Secondly, carbon trading, if done right, I believe, can provide a new source of capital for low-to-moderate income neighborhoods in New York City, which in some cases have missed out completely on the sustainability movement. And the way that can happen is, carbon reductions in those neighborhoods could be given extra credit. So, if you provide a carbon reduction in a low-to-moderate income neighborhood, you could get two-to-one, three-to-one, five-to-one credit to trade to commercial owners in Manhattan. We think that will create new business models and provide new sources of capital to bring carbon reductions in those neighborhoods.

CURWOOD: What's been the pushback on this?

MANDYCK: The pushback is cost. This will cost billions and billions of dollars for real estate owners. And I understand that, I get it, we worked hard to make sure that the bill can be implemented in a more feasible way. Carbon trading is one way that that can happen. But make no mistake, in my estimation, this will be the largest disruption in the history of New York City real estate. 50,000 buildings are going to have to do something, billions of dollars are going to be spent, new technologies will be needed. Labor will have to be staged, retrofits will have to be done in a whole new way. And so with disruption comes risk and opportunity. And so I think what people are starting to look at is exactly that. What are the risks that can be mitigated? What are the opportunities that can be pursued to understand, now that the game field has changed, how are we going to meet the requirements that are being set out? 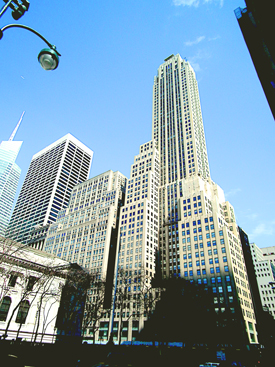 CURWOOD: John, with that list of challenges, how the heck were you able to get this through?

MANDYCK: Well, you have to understand the broader context here. And it really breaks down in three points. There's a policy context, New York City has a mandate to reduce our carbon emissions 80% by 2050. It's a big goal. Buildings represents 70% of those emissions. So, from a policy context, the new law is a huge down payment in how we get to the "80 by 50" goals. And the economic context is the fact that New York State has $3 trillion of insured coastal assets, that's twice the GDP of Canada. We have a lot at risk when it comes to climate change. And Superstorm Sandy is no better example than that. It left a $20 billion bill. So, we have to be prepared from a climate standpoint, to protect the assets of the city. And then, the third context is the environment. We see the effects of climate change every day. It's no longer theory. It's here. It's real. New York Harbor is up one foot in the last century. And so when you look at the policy, economic, and environmental context, you can see why it pushed policymakers to take action.

CURWOOD: How important is it that New York City is doing this? Some would say New York is the capital of the world, at least has the UN in it, anyway.

MANDYCK: It's really important because it shows cities can act on climate change. And in fact, cities have policy levers that often national governments don't have. So if you look in the case of buildings, in the United States, the federal government has no regulatory purview over buildings. And so to look at the number one source of emissions in a big city, it's really the city that has to act. 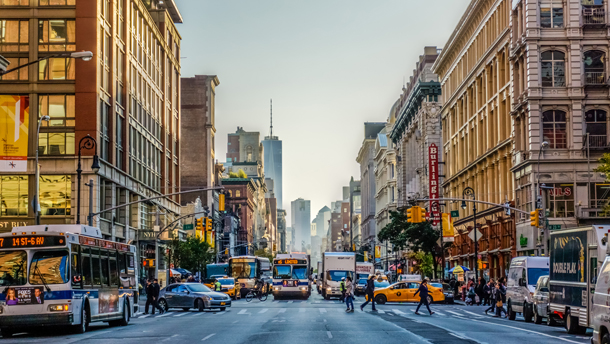 New York City has committed to reduce their emissions at least 80 percent by 2050, and the Climate Mobilization Act provides six pathways for the city’s buildings to achieve this goal. (Photo: Jeff Turner, Flickr, CC BY 2.0)

CURWOOD: John Mandyck, in any given city, why do buildings matter so much?

MANDYCK: Buildings matter a lot to climate change. If you look across the world, buildings consume about 30% of global energy. But if you look in a city like New York, buildings consume 70% of the energy in New York. And that's not atypical for large urban centers. It's about the same proportion in London, for example. And that's because we have different profiles in large urban centers, and some other cities, in the sense that we have strong and carbon-efficient public transportation systems. They may not always run on time. But they move a lot of people and they do it in a carbon efficient way. So the carbon profile of New York for buildings is quite different than LA, where cars play a much bigger role. In New York, because cars are not on the road, and transportation is efficient, what's left are buildings. And so buildings play a big role in carbon emissions. And they're the source of how we can achieve a lower carbon future.

CURWOOD: Now, the Urban Green Council helped to create this legislation. What other plans do you have for similar legislation ahead?

MANDYCK: Well, we think there's great opportunity in the carbon trading idea. And so we're going to be pursuing how that can work in New York, and how that could work around the world. This is one policy that's exportable. Carbon trading can work anywhere in the world. And that's important because we're going to spend billions and billions of dollars in New York City to meet this new law. And when we do so, if other cities don't act, New York Harbor is still going to flood, because climate change is a global problem. So we have to do our part in New York, and we have to show leadership for how cities can reduce carbon emissions at a historical level. But we have to do it in a way, providing ideas for other cities to look at. Carbon trading is one of those.

CURWOOD: John Mandyck is the CEO of the Urban Green Council in New York City. John, thanks so much for taking the time with me today.

MANDYCK: Steve, it was great to spend time with you. Thank you.

CURWOOD: And by the way, there are eight buildings that carry the name of President Trump in Manhattan. And if those don’t reduce or offset their emissions by 2030, they will be liable for more than two million dollars a year in fines.