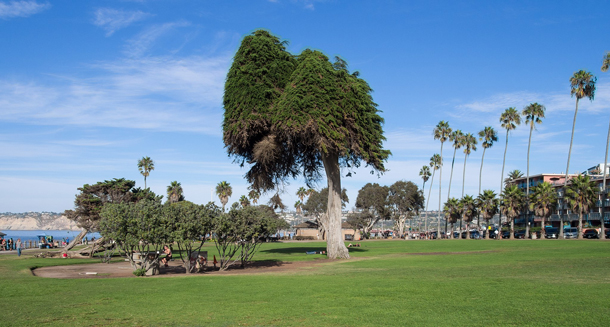 This Monterey cypress in San Diego, California’s Scripps Park, rumored to have inspired Dr. Seuss's Truffula trees in “The Lorax”, toppled over in June 2019 at an estimated 80-100 years of age. (Photo: Rhododendrites, Wikimedia Commons CC BY-SA 4.0)

This week, Peter Dykstra and Steve Curwood dive beyond the headlines to note the fall of an iconic Monterey Cypress tree in San Diego, California, which was said to have inspired Dr. Seuss’s Truffula trees in “The Lorax”. Next they discuss the European far-right’s apparent shift away from climate denial, as climate-driven immigration hits home, and finally in the history calendar, it’s the 50th anniversary of the infamous Cuyahoga River fire, which helped prompt the passage of the Clean Water Act.

CURWOOD: It's Living on Earth, I'm Steve Curwood. And it's time now to take a look beyond the headlines with Peter Dykstra. Peter's an editor with Environmental Health News, that's EHN.org, and DailyClimate.org, on the line now from Atlanta, Georgia. Hey, Peter, what's going on?

DYKSTRA: Hi, Steve. We're going to start with some sad news from the world of animation and books and movies. The Monterey cypress tree that's said to have inspired Dr. Seuss to write The Lorax has passed away, estimated age 80 to 100 years.

CURWOOD: Oh, no, not a Truffula tree! Where was it? 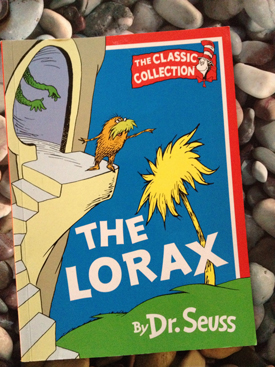 The titular character of Dr. Seuss' The Lorax is said to "speak for the trees". (Photo: Alan Parkinson, Flickr, CC BY-NC 2.0)

DYKSTRA: It was in a city park in San Diego, where Dr. Theodor Seuss Geisel could see it from his home. The city parks department hopes to repurpose the tree trunk, and of course, there's no word on the condition of The Lorax.

CURWOOD: Hmm. So “repurpose…” Maybe they'll make it into a chair or table, say, a table where they could lay out plans to address the threatened extinction of Monterey Cypress trees.

DYKSTRA: Ah, you're speaking for the trees, Steve, but we'll have to table that for now.

CURWOOD: Hey, what else do you have for us?

DYKSTRA: Another story caught my eye from Europe. The European far right, like a lot of far right political entities, including in this country, tends to be associated with climate denial. But there are the beginnings of a switch in Europe. Of course, the far right has enjoyed a rebirth in Europe, largely over fears – some of them quite hateful – about immigration. And of course, it's dawned on the far right in Europe that immigration is one of the consequences of climate change. So, they're taking another look at it in countries like Denmark.

CURWOOD: So, Peter, how far do you think this thing is going? Of course, in Europe, they have a multi-party system. So even just a few votes along these lines, if the far right and the far left get together, they might be able to do something.

DYKSTRA: They might have an impact in this one issue. Heaven knows what their impact would be on other issues. It's just significant that at the opposite end of the political spectrum, climate change may be starting to hit home.

CURWOOD: Well, funny thing about climate change, it doesn't discriminate. We're just one species and we have just one planet.

DYKSTRA: That's right. And it doesn't stop at the border or the coastline, even if the coastline is moving in a little bit. 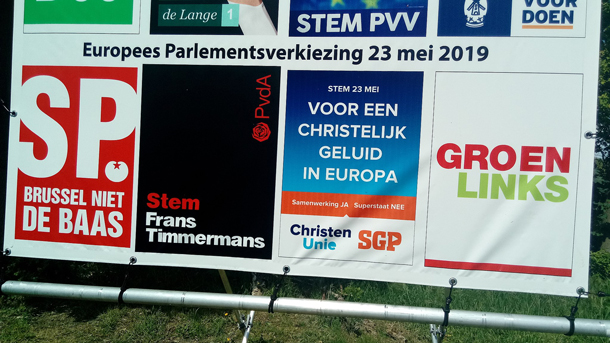 CURWOOD: Hey, what do you have for us from the history vaults this week?

DYKSTRA: From the month of June in the year 1921, when the US Commerce Department convened what may well have been the first conference on water pollution. There were Feds, state and local officials, other stakeholders. They gathered not just to talk trash, but to talk about sewage and chemical waste, and everything else we dumped in our rivers back then, and to a lesser extent still dump in our rivers now.

CURWOOD: But, 1921… what happened as a result of this meeting?

DYKSTRA: Not much happened at all until the Cuyahoga River conspicuously caught fire and burned, 50 years ago this week. It wasn't the first time the Cuyahoga burned, but it was one that caught America's attention and inspired the Clean Water Act. 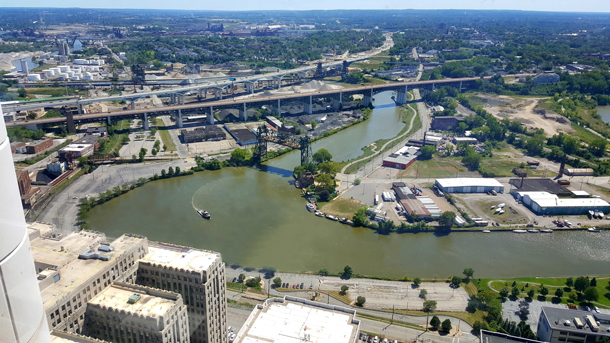 CURWOOD: And there's more on these stories at our website, LOE.org.


CNN | “The tree thought to have inspired Dr. Seuss’s ‘The Lorax’ has fallen”