Clover is a great plant to have mixed in with your lawn for pollinators. (Photo: Flickr, Martin LaBar CC BY-NC 2.0)

Recent studies show insect populations are in sharp decline, and as many as 40% of insects may be facing extinction in the coming decades. That includes critical pollinator species such as bees, which play an essential role in ecosystems as well as our food system. Now lawmakers in Minnesota have approved a new program that pays homeowners to convert their lawns to pollinator-friendly habitat. Host Bobby Bascomb talked with Sarah Foltz Jordan, a Senior Pollinator Conservation Specialist with the Xerces Society, about what people can do to make their own yards more pollinator-friendly.

BASCOMB: Recent studies find insect populations are in sharp decline. As many as 40% of insects may be facing extinction in the coming decades. That includes critical pollinator species like bees, which are responsible for pollinating the crops that provide one in three bites of food we eat. Cities and towns around the world are beginning to take the problem seriously. In London, they’ve planted a 7-mile bee corridor to provide wild flowers for the city’s pollinators. And closer to home, lawmakers in Minnesota have approved a new program that pays homeowners to convert their lawns to pollinator-friendly habitat. With us to talk more about the Minnesota program and what people can do to help pollinators is Sarah Foltz Jordan, a Senior Pollinator Conservation Specialist with the Xerces Society. Thanks for joining us, Sarah! 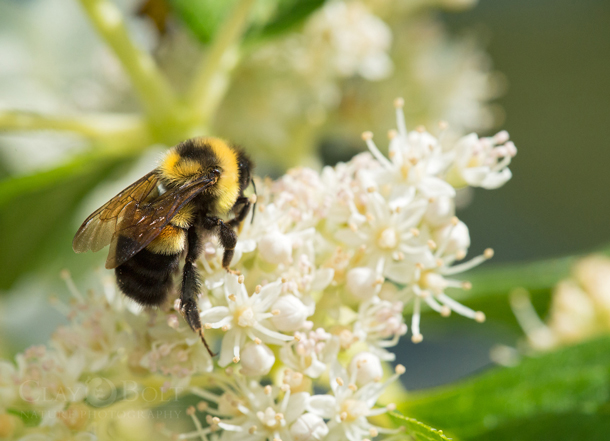 The state of Minnesota has launched a new program to help support the Rusty Patched Bumblebee, along with other native pollinators. (Photo: Courtesy of Xerces Society/ Clay Bolt)

BASCOMB: So, how will this new program in Minnesota work? Can you break it down for us, please?

FOLTZ JORDAN: So, the idea is that the program will provide funding to residential sites where turf conversion is a possibility. So, the idea is we'll be converting lawn or turf, managed turf, to something that's much more beneficial for pollinators. And there's a variety of options there, ranging from something simple like introducing clovers and other legumes into grasses. But, also, my expectation is that the majority of the funding will go towards converting that turf to diverse native plantings for pollinators that provide blooms spring through fall and really do a good job of supporting a wide variety of the species.

BASCOMB: And, how much money is being put into this program? How much can homeowners expect to be compensated?

FOLTZ JORDAN: The amount of money that was allocated for the program is $900,000, to be spent down over a two-year period. I am not sure what individual landowners can expect to receive. It will be, you know, really dependent on what projects they choose to do and at what scale. 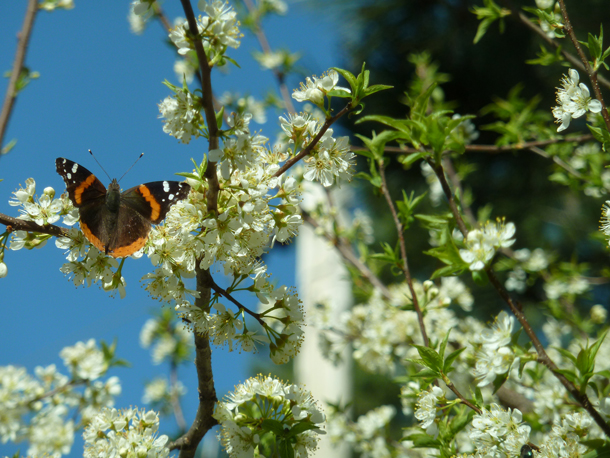 BASCOMB: But they'll get reimbursed up to about 75% of their costs for doing this, is that right?

FOLTZ JORDAN: Exactly! Yeah. And even higher than that if they are in a priority zone for the Rusty Patch Bumblebee, which was a species that the program is kind of designed to really help support.

BASCOMB: So, why the Rusty Patch Bumblebee? Why design this program around that particular insect?

FOLTZ JORDAN: In 2017, it was listed as federally endangered. It has now declined by about 87%, it's still hanging on. In the metro region of Minnesota and Madison, Wisconsin, there's a few strongholds, although they could certainly be stronger. What we're looking at here is trying to boost up the population of this bee by connecting different places where we know it's still occurs, providing some connectivity by increasing habitat in those corridors. And, also just bringing up the number of flowers across its range.

BASCOMB: And presumably planting flowers and native plants and things will help a whole lot of pollinators other than just the Rusty Patch Bumblebee.

FOLTZ JORDAN: Exactly. Yup, it's sort of a flagship species. But these plantings will benefit a lot more than that bee. And I'm expecting many people will be really interested in supporting the monarch butterfly with their plantings as well by including milkweed host plants and a wide variety of nectar plants.

BASCOMB: Right. Can you put this into a larger context for us? I mean, what's the current situation with bees and pollinators more generally.

FOLTZ JORDAN: So, the Rusty Patch Bumblebee, which I was talking about earlier, has declined by 92%. So, that's pretty dramatic. It was formerly very common, and is now barely hanging on. Monarchs, similarly, are, you know, one of our more charismatic, well-studied insects. So we've seen 60 to 90%, declines in population size, depending on what years you're comparing, in our Eastern population. I mean that's sort of the tip of the iceberg. There's a lot of species that are not as well on our radar. And it's really hard to say how they're doing.

BASCOMB: The monarchs, as you said, are a charismatic insect, you know, maybe people had them in jars in school when they were kids and things. But, pollinators by definition are extremely important, for ourselves and for the ecosystem as a whole. Can you talk about that a bit, please? 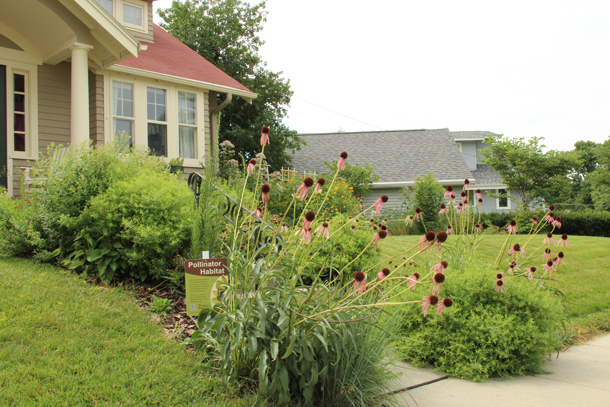 FOLTZ JORDAN: Sure! Yeah. I mean, the economic significance gets a lot of attention. So, you know, our food systems are really dependent on pollinators. But, I don't think we give pollinators maybe as much credit as we should for their role in preserving and sustaining our natural ecosystems. So, about 85% of our wild flowering plants are pollinator dependent. And, you know, pollinators are also kind of keystone species in other ways. So, they're providing pollination services that enables the fruit and seedset of a lot of plants, but they also are being consumed by birds and small mammals and kind of supporting these diverse food chains and ecosystems in that way as well.

BASCOMB: Hmm. And, so why are insects and pollinators in such sharp decline right now?

FOLTZ JORDAN: It's really a multi faceted problem. So, you know, they're being hit in a number of ways. There's been dramatic habitat loss, increases in pesticides, including a lot of pollinator lethal pesticides, and also increased disease spread. So, kind of circling back to the program we were initially talking about, this is addressing just kind of one aspect of pollinator threats, that habitat piece, but it's something that we all have the power to do something about. So, as we think about increasing habitat for pollinators in our yards and bringing in more flowers, my hope is that we're also thinking about pesticide reductions. 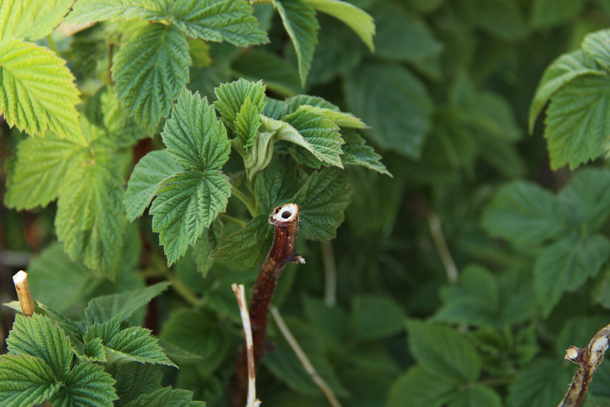 BASCOMB: So, Sara, what can you suggest for someone that's listening now and maybe wants to make their own yard more pollinator friendly?

FOLTZ JORDAN: The most important thing we all can start doing is thinking about our landscaping decisions, not just in terms of our own aesthetics, and, you know, maybe the status quo. But also thinking about these decisions in terms of how these plants that we choose to put into our yards can in turn support higher trophic levels, so the ecosystem a little bit more broadly. And I think when we start thinking through that lens, it becomes really clear that native plants are essential. And when I think about native plants, butterflies and moths really kind of hit home for me, because many of these butterflies and moths have really, really close relationships with certain native species that they can only feed on. And then a lot of our bees also are specialist species, and will only select pollen to feed their babies from certain plants. I think it's a little bit confusing for people sometimes because butterflies and bees will visit non-native plants. So it can look like 'Oh, these plants are doing a great job at attracting bees and butterflies.' But just because they're visiting doesn't mean that the nutrition that they're getting is adequate or preferred. And I noticed this in my own yard, I still grow quite a few cut flowers. But I used to have a lot of cut flowers and non-native ornamentals and have gradually chipped away at that and started converting most of that to native flowering plantings. And it has been just astounding to witness that change in the types of insects that I'm seeing and the abundance of insects that I'm seeing, just because of the plants being better suited to meet their needs. 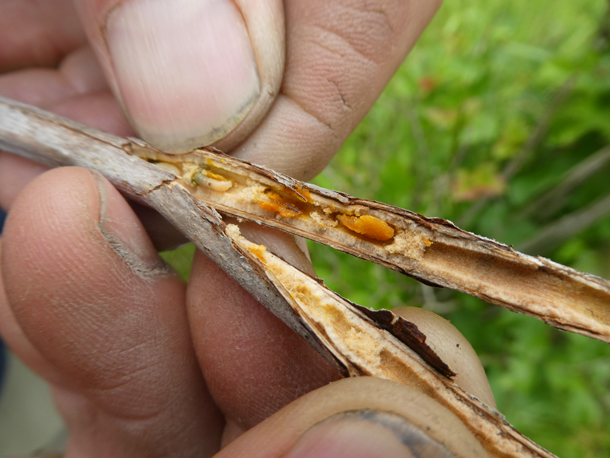 BASCOMB: And, clover even seems like a good place to start. You can plant that even in with your own grass, and it's relatively short. So it's not, you know, such a big change for people, I would think?

FOLTZ JORDAN: Exactly, yup. That's kind of a baby step, is getting some clover into your grass, or even easier would be just to - a lot of people have flowering weeds in their lawns that they work really hard to keep out. But, again, if we can kind of change our aesthetics and learn to see those weeds as something beneficial for other species that can be really helpful, just kind of letting those things... letting them go.

BASCOMB: So, Sarah, beyond flowers and native grasses and things, is there anything else that people can do? 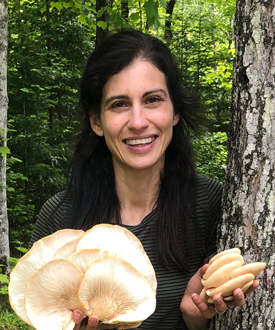 FOLTZ JORDAN: Yeah, flowers are critical for providing really important food. Like we've been talking about, native is best. But, we also need to remember that these insects have nesting and overwintering needs, basic needs for shelter, I guess. So, we really advocate for people trying to leave things like dead stems left in wildflower gardens, branches, brush piles, leaf litter, rock piles, or rock walls. One of my favorite kinds of bees is the Small Carpenter Bee. They nest in stems. So, I planted raspberry bushes right outside of our front door, and I prune them back every year at about, I don't know, maybe three feet, two to three feet tall. So it's a really easy height for me to observe what they're doing there. And what happens is the raspberries will flower in the spring and the little bees will come out and they'll collect pollen and bring it to their nest. And they nest in these raspberry canes. So, the cut ends that I create is the entrance to their homes. And I can watch them all day, just like, gathering pollen bringing it in. They make little bedrooms within the stem for each of their offspring. So, every baby gets its own room with its own little ball of pollen and nectar and then a wall and then they do it again. And it's kind of this linear series. And, then they actually exhibit parenting behavior as well, which is a little bit unusual in insects where they will watch that nest and protect it from predators and make sure those babies get off to a good start when they finally emerge. So, that's one of my favorite little bees to hang out with. (LAUGHS)

BASCOMB: Sarah Foltz Jordan is a Senior Pollinator Conservation Specialist with Xerces Society. Sarah, thank you so much for all this information.

FOLTZ JORDAN: Yeah, thank you, Bobby! It was my pleasure.


More about the MN pollinator program

More about the Rusty Patched Bumblebee