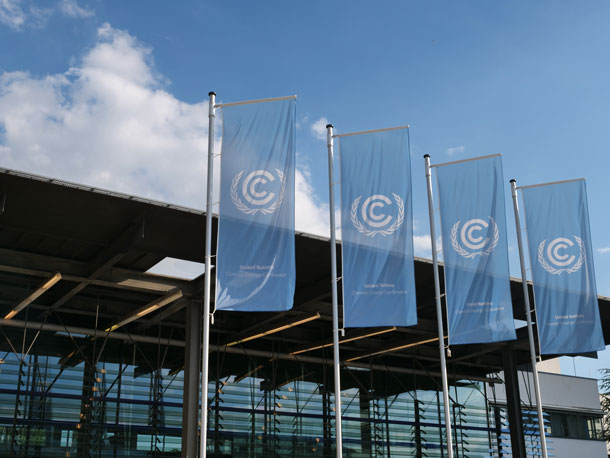 Thousands of delegates from around the world met for two weeks for the Bonn Climate Change Conference in order to discuss the details of the Paris Agreement. (Photo: German Development Institute, Flickr, CC BY-ND 2.0)

June 2019 brought world leaders together at two major meetings: the Bonn Climate Conference and the G20 Osaka Summit. Negotiators in Bonn continued their work on hammering out the details of the landmark Paris Climate Agreement. But although much stronger commitments under the Paris Agreement are needed, major polluters have yet to step forward with promises to further curb emissions, and the US is opposed. The US also blocked climate action at the G20 meeting in Osaka. Alden Meyer, Director of Strategy and Policy for the Union of Concerned Scientists, joins Host Steve Curwood to sort through the major takeaways from these meetings.

Disruption of the climate seems to be advancing quickly. Mexico just had a freak storm with waist-deep hail in Guadalajara. Not long ago Mumbai, India shut down trains in many parts of the city, when months worth of rain fell in just two days, and since March, Southeast Africa has suffered two record-breaking cyclones. But in Europe, where France was just scorched by a 115 degree heat wave, climate protection negotiators in Bonn, Germany recently worked at a rather glacial pace to flesh out the mechanisms of the Paris Climate Agreement. At the G20 meeting in Japan, the US blocked consensus on climate action. Alden Meyer, director of strategy and policy for the Union of Concerned Scientists just returned from Bonn and has an update. Hi, Alden, welcome back to Living on Earth.

CURWOOD: So there were, what, 2,000 delegates there in Bonn at this latest round of climate talks. What got accomplished?

MEYER: Well, this was really preparing the way for COP25, the 25th Conference of the Parties meeting in Santiago, Chile. So they were focusing on decisions that they would be forwarding for consideration by that summit. The big unfinished piece of business coming out of the Katowice, Poland summit last year was article six of the Paris Agreement, which is the so-called market mechanisms. Can countries cooperate with each other to meet the pledges they put forward to reduce their emissions under the Paris Agreement? It was very intense, they did succeed in sort of expanding the negotiating text, getting everyone's ideas in the mix, on the table. But they did not make much progress on closing any of the deep divisions over ways to ensure that any market mechanisms work for the benefit of the environment, not just to reduce costs to a million countries, but actually contribute to raising ambition. So that was one of the issues. They're hoping to wrap that up in Santiago in December. But I think that's going to be a very heavy lift, to bridge the deep divisions there and finish that one remaining piece of the Paris rule book.

CURWOOD: What about the question of loss and damage? That is, that the less developed countries are having to cope with the effects of climate disruption?

MEYER: Well, that's going to be a big issue in Santiago this December at the next climate summit meeting. What they were doing in Bonn is framing what's called the terms of reference for how they're going to conduct that discussion. What's on the table? Is it just backward-looking at how they've done since the loss and damage mechanism was set up six years ago at the COP in Warsaw? Or are they going to look forward? And especially are they going to look at ways to mobilize more financial support for countries that are struggling to cope with the mounting impacts of climate change over the next several decades? So we need to address this issue. It's a very intense issue, and countries like the US are ferociously resisting any meaningful discussion of expanding financial resources for loss and damage.

CURWOOD: So, Alden, there's another meeting of world leaders in New York this September, what's that summit all about? And how is that different from the Climate Summit?

MEYER: Well, that is the United Nations Secretary General Antonio Guterres, who has called for world leaders to come to a one day event in New York during the opening of the United Nations General Assembly, it's going to be on September 23. And the explicit focus of that meeting is to raise ambition, particularly to hear from countries how they plan to increase their current commitments and pledges under Paris, because all the analysis shows that even if countries carry out the commitments they've made, they only get us about one third of the way towards the emissions reductions by 2030 that we need to have any chance at holding temperature increases below two degrees Celsius. So he's called this summit. It's not a one-day event, he wants to have follow up for this. So there will be a discussion of it in Santiago, three months later. And of course, this is all aimed at the next Conference of the Parties meeting, which will be at the end of 2020, which is the real deadline for countries to give their final answer about whether they're prepared to raise the ambition of their current commitments under Paris. So this is going to be a very high profile moment. That's the good news. The bad news is we're not yet clear what the major emitting countries are going to be willing to bring to the table. So far, none of the big players are willing to formally say they will increase their commitments. So that is going to be the task before us, not only in the lead up to the summit, but for the rest of this year and going into next year. 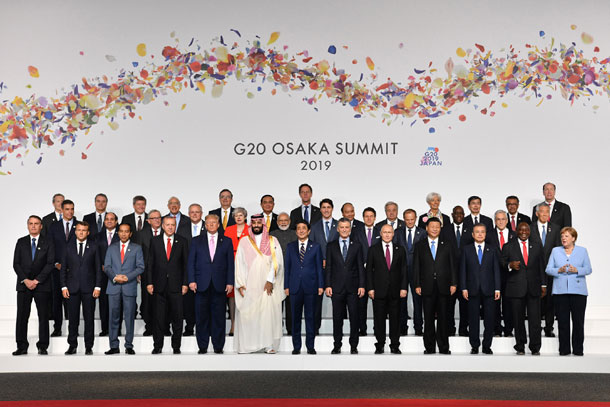 World leaders from 19 countries and the European Union met in Osaka, where all but the United States reaffirmed their commitment to the Paris Agreement. (Photo: G20 Osaka, Flickr, CC BY-NC 2.0)

CURWOOD: And speaking of summits, we just saw the G20 summit wrap up, in Japan. How did the climate fare at that summit?

MEYER: Well, it was a very intense discussion. The Japanese hosts of the meeting were desperately trying to find a consensus between the 19 countries that are still in the Paris Agreement and the United States which has said it intends to withdraw. And that is causing deep divisions. Despite the Japanese effort to get consensus, it was very clear the United States was not willing to sign on to anything which mentioned the Paris Agreement, the need for deep decarbonization, the urgency of action on climate change. So what happened is what happened at the last two summits in Germany and Argentina, where they had a separate paragraph for the United States explaining that it is not in the Paris Agreement, does not intend to meet its Paris commitments, and why. And the other 19 countries indicated that for them, Paris remains irreversible and they intend to go ahead. 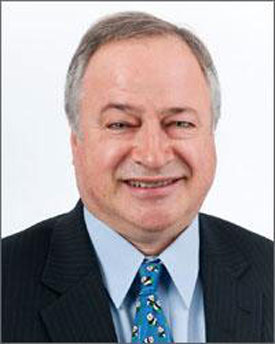 CURWOOD: How depressed are you about all this?

MEYER: Well, I'm obviously depressed that we're not getting a better response from political leaders. The impacts are very clear, more and more people are out in the streets, but I think you're seeing the power of the fossil fuel industry. The power of inertia and vested interest in a number of these countries that are really slowing down the response that we should see. There are some bright spots, however; just in the last month, the United Kingdom has formally declared a climate emergency and has adopted a 100% reduction going for net zero by 2050. In the second week of Bonn, the new government in Denmark announced that it would be putting in place a plan to cut emissions 70% by 2030. I think that's the most ambitious reduction target I've heard from either national or sub national governments. So there are some good signs here but we're not moving at anywhere near the pace that we need to head off truly devastating impacts of climate change. And that is depressing.

CURWOOD: Alden Meyer is director of strategy and policy for the Union of Concerned Scientists.

Find out more about the UN Climate Action Summit 2019