“#MeToo” at the Nature Conservancy 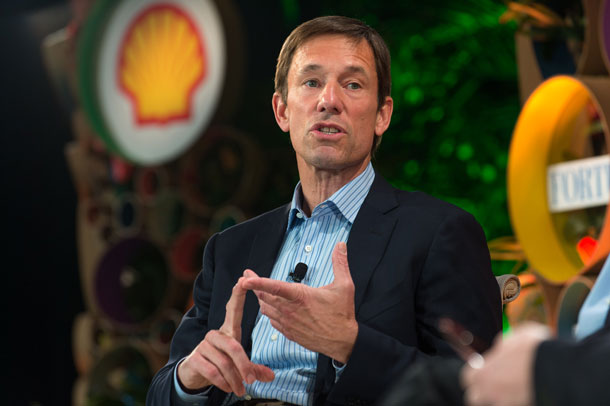 Mark Tercek is the former CEO of the Nature Conservancy, having stepped down following an external report that revealed workplace misconduct and years of allegations of discriminatory treatment of women employees. (Photo: Stuart Isett, Fortune Live Media, Flickr, CC BY-NC-ND 2.0)

At $1.3 billion in annual revenues, The Nature Conservancy is among the biggest environmental nonprofits in the world, and in nearly 70 years, it has protected 120 million of acres of land worldwide. But in 2014 it came under fire for allowing oil and gas drilling on protected land, and now the organization is being rocked by a vast scandal, with allegations of workplace misconduct, sexual harassment and discriminatory treatment of female employees. Several senior executives including the CEO have left the organization, and trust in the organization has been shaken. Zack Colman is the reporter at Politico who broke the story, and he speaks to Host Steve Curwood about The Nature Conservancy's current troubles.

CURWOOD: And I’m Steve Curwood. Since its founding in 1951, The Nature Conservancy has protected some 120 million acres around the world, including many key habitats. But sexual harassment and discrimination allegations recently toppled four of its executives, including its $800,000 a year CEO. This is not the first time Nature Conservancy has gotten itself into trouble. Big oil companies have been key donors of cash and land, including an area in Texas donated by Mobil that was intended to protect the endangered Attwater’s Prairie Chicken. But published reports in 2014 documented that the Nature Conservancy allowed drilling for oil and gas on that land and took in millions of dollars in royalties as a result. Zack Colman is an energy and environment reporter for Politico who has been writing about the current problems at America’s largest private conservation organization. Zack, welcome to Living on Earth! 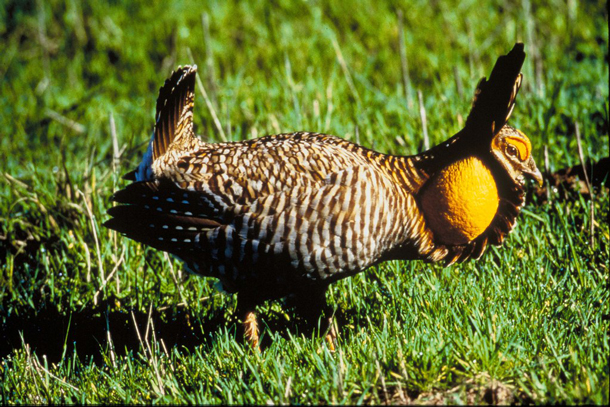 An endangered Attwater's prairie chicken inflates the orange air sacks on the sides of its neck to make a “booming” sound, in a spring mating ritual popular with visitors to the Attwater Prairie Chicken National Wildlife Refuge in Texas. According to a 2014 New York Times report the Nature Conservancy permitted drilling for oil and gas on lands it had promised would be protected as habitat for the endangered bird.(Photo: George Lavendowski / U.S. Fish and Wildlife Service, Flickr CC BY 2.0)

COLMAN: Hey, Steve, thanks for having me.

CURWOOD: Zack. Take us now through the history of the recent troubles with the Nature Conservancy. Some senior people have left. Who are those folks and why are they leaving?

COLMAN: So what happened here is there was an external investigation of the company's culture that was prompted by anonymous tweets from an account that accused the president, Brian McPeek, of sexual harassment. There were a bunch of claims made. One was found credible, and there was an exhaustive list of company cultural issues tied to gender discrimination, alcohol served at work functions, people accusing higher ups of harassment and discrimination but not being believed when those accusations were made. All of this was documented in a report and it was sent out to staff. The CEO of the Nature Conservancy, Mark Tercek said, despite all this we're going to keep the president, Brian McPeek on, and have a good day. That didn't go over well. After that, it all unraveled. The staff did not have confidence in Brian McPeek's ability to lead. McPeek resigned a day later. Tercek's ability to hold on to his job became questioned. And he left a week later.

CURWOOD: Now, Zack, I'm just scratching my head a bit here, because while sexual harassment is not good in any organization, it seems to me much more must be going on here.

COLMAN: Much more is going on. It's one of those things where this company's culture had become so corrosive for women employees in particular. There was just a sense that women were not listened to, that women had such different standards for advancing, that there was rampant discrimination, and that women had differing expectations for success. There was actually, months before this, an internal investigation by the company's Gender Equity Advisory Council, which listed a whole bunch of recommendations, surveyed men and women within the company. And women said that they felt it was, quote, a "good old boys club". And that the onus was on women to find a way to succeed in a male dominated workforce. That's what the men said at the company. So there are just widespread cultural issues here. The women in that survey said change must start at the top. And this is the type of behavior and culture that was ignored for years. 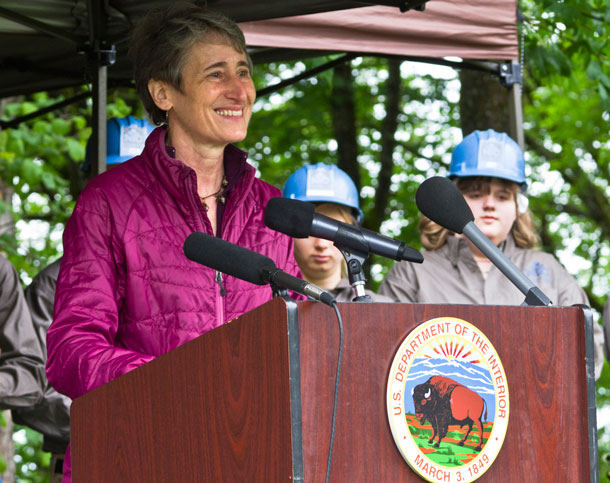 Sally Jewell is the former US Secretary of the Interior under the Obama Administration, and former CEO of REI Coop Outfitters. She has been named interim CEO for the Nature Conservancy, starting September 3, 2019. (Photo: Matt Christenson, Bureau of Land Management, Flickr, CC BY-SA 2.0)

COLMAN: Well, keep in mind this was in 2008, when he came. This is nine years prior to what we now know as Me Too. It's not to say that there weren't people talking about these issues back then. But it certainly didn't have the relevance and resonancy that it has today. So Mark Tercek got brought on when Congress was debating cap-and-trade legislation. He comes in with this business-minded outlook on the environment at a time when Congress is taking very much a business-minded, private sector approach to the environment as well. He comes in, bringing all these financial mechanisms, this promise to work with corporations. And for business, it worked out for him, and it worked out for the Nature Conservancy. When he stepped in, the Conservancy had revenues of $537 million in his first full year, in 2009. Last year's filings: $1.3 billion in revenue. So he did grow the business. And that was what they wanted to do. He saw these challenges of climate change and environmental degradation as being so big and the Nature Conservancy's scope and worldview too small.

CURWOOD: Zack, when you when you speak with people at the Nature Conservancy, how do they feel about the changes that have been made, since Messrs. Tercek and McPeek have stepped down?

COLMAN: Honestly, the amount of people who have reached out to me, to thank me for my reporting, and to say there's still a lot of work that needs to be done, it's kind of overwhelming. Because you talk to these people who have been there, who worked for the Nature Conservancy, who still work for the Nature Conservancy. And you know that this goes deep, this cultural issue of women being ignored, having different standards, being harassed. I talked to someone who said that men could basically do no wrong. If there were complaints piling up against senior male leaders, the people above them would protect them from those making the complaints, which is something that was essentially verified through this external report, where one of the conclusions was, that the accused are often believed over the accuser, and that the HR and compliance system was absolutely broken. And people that I talked to, are happy that these issues are finally getting attention, both within the company, but also in the press, and they're excited about this change. They said it was a long time coming. And the thing that's crazy is a lot of these people have been there for five, ten, twenty years, even. And they stuck with it because they believe in the organization's mission. And they believe that corralling corporations and business is an important way to make progress on the environment, because we're just not going to drop these corporations tomorrow. That's unrealistic. But they endured so much to achieve that mission. And they just want it to be a better place that does better by its people.

CURWOOD: So from what you've gathered, what changes are the folks at the Nature Conservancy hoping will be made now? 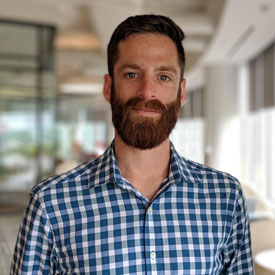 Zack Colman is an energy and environment reporter for Politico. (Photo: Courtesy of Politico)

COLMAN: Well, they know that the work's not done, and they're bringing in interim CEO Sally Jewell, who was the Obama Administration's Interior Secretary in Obama's second term. And they're concerned that by bringing in Sally Jewell, the Nature Conservancy will be complacent. That that is enough. That she's a good enough figurehead, and that they'll just do some rudimentary, sort of, culling of people, maybe. Changing some processes in a superficial way. They know that a deep cultural shift is what needs to happen.

CURWOOD: So what does the future look like for the Nature Conservancy? How will these complaints, and this conflict affect donations do you think?

COLMAN: That's definitely something that people are concerned about. People are concerned that this reputational damage will keep money on the sidelines. I've talked to fundraisers within the organization who say, look, you can't go into an environment with the kind of albatross we have around our necks and get public facing companies to put their name next to us. You can't get them to open their wallets for us when they have so many safer plays they can park their money at. I've contacted a bunch of the funders. I didn't get any comment from JP Morgan, one of the board members from the Nature Conservancy is on JP Morgan's executive team. I got no comments from Shell, I got no comment from BP. Those are some pretty big funders and they're ones that you would think would like to be next to an environmental organization. How many environmental organizations are going to willingly work with BP and Shell? And yet they won't say whether they're going to continue their commitment. I think that's cause for concern. Normally, if you're okay with an organization, you'll say so. The fact that they're not saying something means that they're still probably looking at what their strategy will be going forward with respect to the Nature Conservancy. It's also one of those organizations that's, sort of, too big to fail. It will continue. Whether it drives $1.3 billion in revenue again, I'm not sure. But those fundraising metrics get set up on an escalating scale, you always want to do more than you did the year before. So, that's what a lot of people are concerned about, right now at the organization is, can we keep doing what we were doing? And it seems like that's in jeopardy.

CURWOOD: Zack Colman is an energy and environment reporter for Politico. Zack, thanks so much for taking the time with me today.

COLMAN: Thank you for having me.


Politico | “‘The System Was Broken’: How the Nature Conservancy Prospered but Ran Aground”