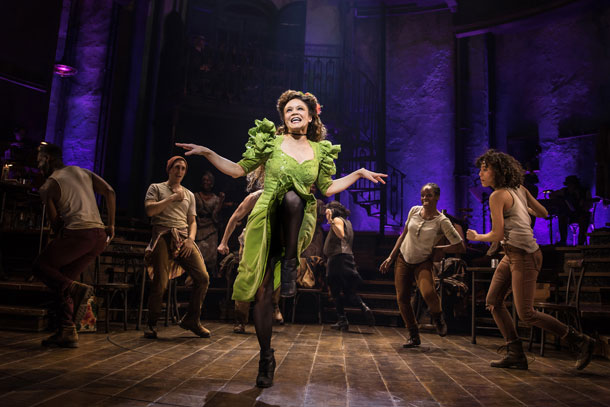 According to ancient Greek myth, Hades, ruler of the underworld, kidnaps the Goddess Persephone and brings about the first winter on earth. For writer Anaïs Mitchell, that sudden change in the climate is the perfect backdrop for the story of her Tony Award-winning Broadway musical “Hadestown”. The show infuses the theme of climate change with New Orleans jazz, folk, and pop music. Here to tell us more is the director of “Hadestown”, Rachel Chavkin. Rachel, welcome to Living on Earth.

CHAVKIN: Thanks very much.

BASCOMB: So for someone that hasn't seen the show or listened to the music yet, can you give me a quick summary of what it's about? 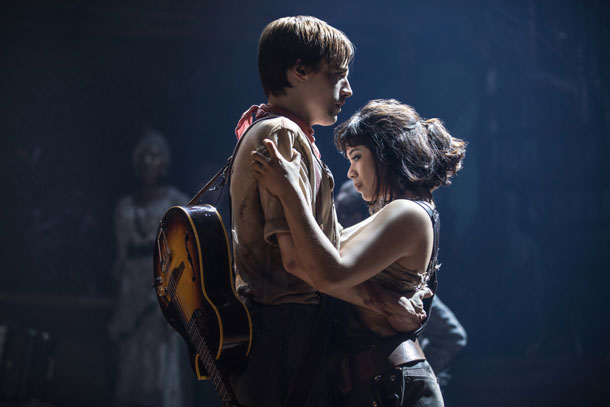 The musical tells the Greek Mythological tale of Orpheus and Eurydice in a Great Depression-era-inspired, post-apocalyptic setting. Reeve Carney and Eva Noblezada play the characters on stage. (Photo: Matthew Murphy)

CHAVKIN: Yeah. So “Hadestown” is a retelling of an ancient story, for those who know their Greek mythology, which is the Orpheus and Eurydice story, as it intersects with the myth of Hades and Persephone. Eurydice says -- I think these lyrics are no longer exactly in it, but -- "flood will get you if the fire don’t”. So there's a sense that the above world is a dangerous place. But you hear about this mythic place, which is Hadestown, and Hadestown is a land of plenty and a land where you sort of aren't ever worried about where your next meal is going to come from. And so during Act One Eurydice chooses to go down to Hadestown, and the audience along with Eurydice discover that Hadestown is actually basically this proto-fascist state. And you hear about a wall that is getting built, and the wall will never be done. And Orpheus comes down to Hadestown to try to get the love of his life back.

BASCOMB: So here at Living on Earth, we tend to look at everything through the lens of the environment. But it seems pretty clear to me that there's some clear allusions to climate change. Can you tell me about that?

CHAVKIN: Yeah. So the image of the climate being out of whack has been a core one for Anaïs since she started writing the show. And so as we thought more and more about shaping the world that Eurydice and Orpheus are living in, a world caused by, in Greek mythological terms, the decay of this ancient marriage between Hades and Persephone, a world that is out of balance, where it is either freezing or it’s blazing hot, and that food becomes a really, you know, a scarcer substance and the idea of stability becomes harder to imagine, and that Eurydice is, is a character who has spent her life running. All of those are things that kind of crystallized while we were making the show.

BASCOMB: Well, let's play a song from the show. I want to play a clip of “Any Way the Wind Blows”. But before we do, can you set it up for me? What's happening at this point in the storyline?

CHAVKIN: Yeah, so “Any Way the Wind Blows” is really right at the top of the story. It's really where you hear her, this kind of tough chick who is this survivor, walk into this bar, that is Hermes' bar where she will eventually, right after this song, meet Orpheus, the love of her life. And she talks about how screwed up the weather is. 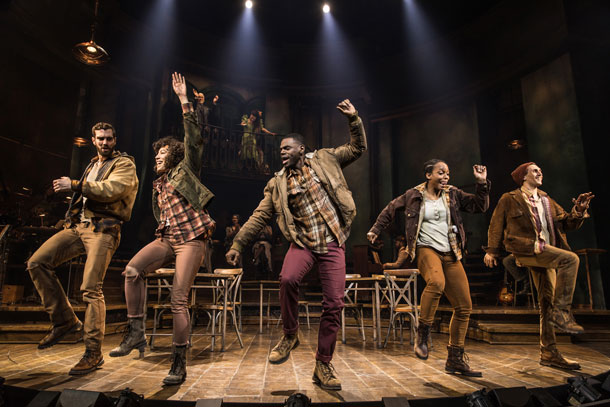 Hadestown is an underground factory that serves as refuge from the weather above. (Photo: Matthew Murphy)

Weather ain't the way it was before.

Ain't no spring or fall at all anymore.

It's either blazing hot, or freezing cold. Any way the wind blows.

And there ain't a thing that

you can do when the weather takes a turn on

you, 'Cept for hurry up and

hit the road. Any way the wind blows…

BASCOMB: So that song seems a little post-apocalyptic, but in keeping with what scientists tell us to expect with climate change, you know, shifting seasons, droughts and floods. Was that the idea here?

CHAVKIN: Definitely Anaïs was profoundly impacted by the news that was happening. I mean, every day while we were making this, while we were making this work. During the last fire season when California seemed to be you know, totally, totally a flame. And, and then meanwhile, on the East, you had these tremendous floods that now we're seeing in the Midwest. Yeah, all of that, all of that news impacted the lyrics and imagery of the, of the show. 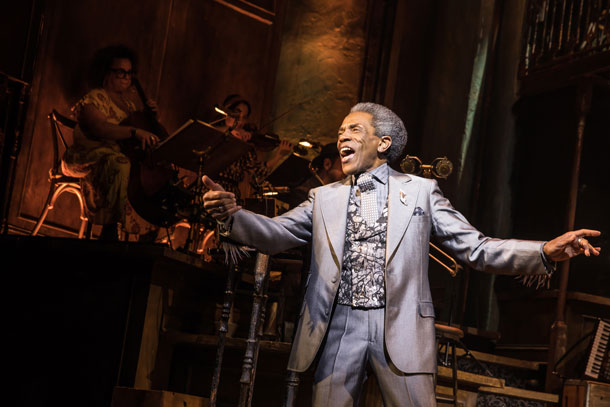 When your body aches, to lay it down.
When you're hungry and there ain't enough to go round.
Ain't no length to which a girl won’t go
any way the wind blows.
BASCOMB: You could probably make the argument that Eurydice is considered an environmental refugee. I mean, she leaves her cold home in seeking something that's safe and warm in Hadestown. To what degree do you think that that's true?

CHAVKIN: I would say that is very fair to how we discussed it. You know, I think that there is the idea that Eurydice, has many, many things, many demons chasing her; the weather is one of them. The weather is of course, also a metaphor for economic injustice. She makes the choice to go to Hadestown, you know, she's choosing between the love of her life and the ability to have food, and know that she has a place to sleep and a bed to lie down in, and a job to go to, so that the environment is part of what she's running from is exactly right.

BASCOMB: Now, Hadestown is actually an underground factory, and maybe indirectly, the source of the problems above ground, you know, the changes in weather and so; that also seems pretty clear commentary on the toll that industry is taking on our environment. 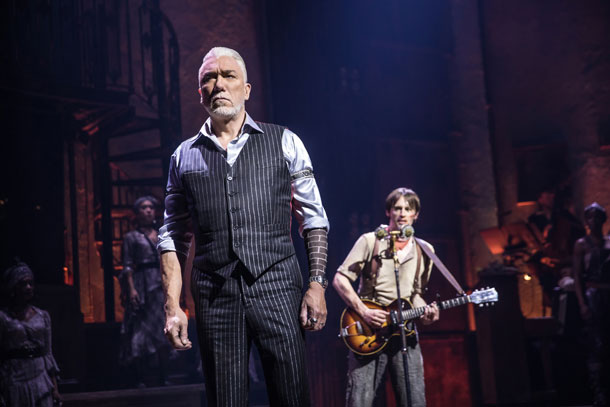 CHAVKIN: Definitely, the metaphors of industry and there being this terrible imbalance between how an industry consumes the natural world, and what the natural world is able to sustain and give on its own, are all through the piece. Ultimately, we think about the marriage of Hades and Persephone, and this marriage between industry and nature, as being one that it's not to say, industry is bad, it's to say that industry is totally out of balance. And as we understand it, that Hades was always a builder, but that at a certain point, when he began to be afraid that Persephone wouldn't come back to him. And he began to be jealous of her time away -- you know, the mythological six months that she had above ground -- that he began to over produce and consume. And there's this image of his jealousy, sort of almost spreading like an oil slick across the land. And Hadestown is the product of that. So it's almost like industry on steroids.

BASCOMB: Well, at the end of the day, what do you hope that people will take away from watching “Hadestown”, from experiencing the music and the show?

CHAVKIN: Hadestown is about many things. But for me the final image and the image that I hope that people leave with happens during “Road to Hell II”. It's the final song in the show proper that Hermes sings. And there's this image of, yes, it's a sad song. It's an old song. But we sing this song, we sing the story of Orpheus and Eurydice anyway, because there is hope in the simple act of retelling the tale. There is hope in the community that gets gathered to hear the tale and that essentially with each generation, the needle moves a little bit, whether we see change in our lifetime or not. 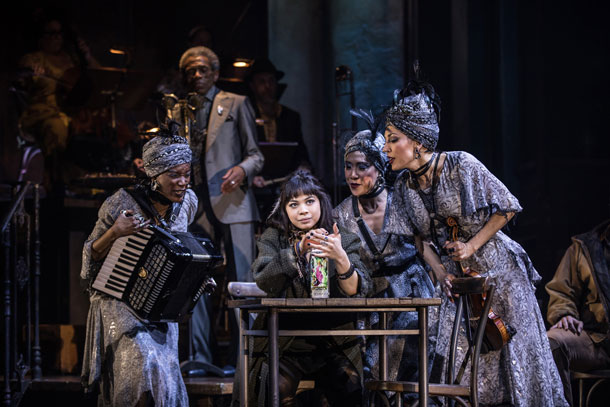 BASCOMB: Rachel Chavkin is the Tony Award-winning director of “Hadestown”. Rachel, thank you so much for taking this time with me.

CHAVKIN: It's a pleasure.

See, Orpheus was a poor boy.

(Anybody got a match?)

But he had a gift to give.

He could make you see how the world could be

In spite of the way that it is.

Can you see it?

Can you hear it?


Learn more about the show