Camels at the Henbury Craters

The wild dromedary camels of Australia's Henbury Craters are not native to the area, but they thrive in the dry heat nevertheless. Living on Earth’s Explorer in Residence, Mark Seth Lender, bears witness.

BASCOMB: From Hadestown to another land down under…. Living on Earth’s Explorer in Residence, Mark Seth Lender, found a creature that will make itself at home in nearly any hot, dry inhospitable place. "

Looking up, lying on my back, the Firmament is a bottomless well where infinite height turns to infinite depth and the worst kind of vertigo. The kind that derives from, our insignificance.

But the Milky Way casts like a net across the sky and there is comfort in that. Most days the wetted air of Long Island Sound makes it impossible to see. And the constellations are also preternaturally bright: Orion’s Belt rising as if from the ocean; Ursa Major named for a Bear and shaped like a cup; the Pleiades, those seven sisters candling the night light years from here; and the Great Magellanic Cloud. 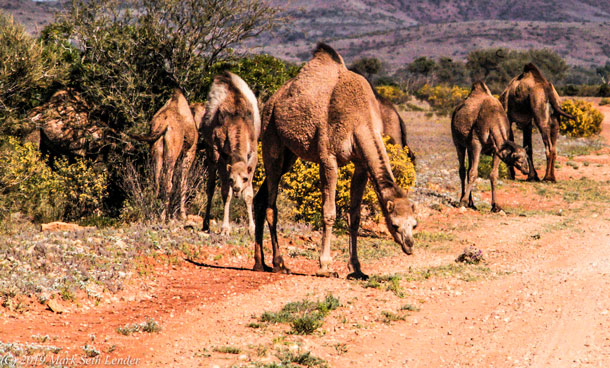 Australia’s wild camels can have a negative impact on their environment, ingesting more than 80% of the available plant species and often fouling waterholes. (Photo: Mark Seth Lender)

Angled low it splinters like a struck match exploding into parts. It leaves behind a pale green afterglow…. And now instead of being present as I was, I am thinking about… the red desert heart of Australia, and the middle, of the middle, of nowhere.

On a day that turned into an evening just like this, I strolled across the landscape of Henbury where a piece of the sky fell down, forty-four hundred years before. The dryness makes the desert night turn cold and I was shivering. From that, and from the thought of what it must have been like when some nameless thing broke free crashing through the upper atmosphere, and seven huge fragments arrived in a storm of fire. The craters left behind, no less apparent than the craters of the moon are Memory, brought into the present, from the distance and the past. 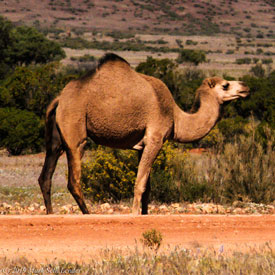 Though considered pests, these wild camels can be manageable if kept out of critical habitat, and at a moderate population. (Photo: Mark Seth Lender)

Down to earth, I turned to go and there on the other side of the gravel road, also as if dropped from the sky, a herd of camels appeared. Eleven of them. Watching as if I was the alien one despite the seventy or eighty thousand years by which humanity preceded their presence. Here, for once, it is the camels, not human beings, who are newcomers. They don’t belong, yet have succeeded, some would say too well. This despite that they were brought without their consent, and when no longer profitable, thrown out, like rags.

Without water. In that heat. And no food. On foot, unwillingly into the silent desolation of Henbury I wouldn’t last a week, wouldn't last the day.

Maybe, this is what who belongs and who does not really means.

Learn more about the wild camels in Western Australia