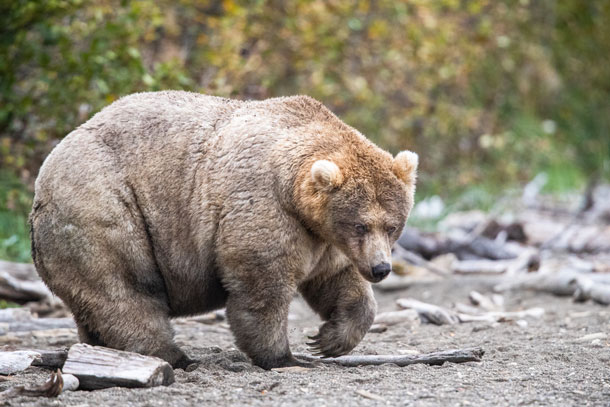 Brown Bears at Katmai National Park and Preserve in Alaska, like 435 Holly, gain intense amount of weight during the spring and summer to prepare for winter hibernation. (Photo: 435-NPS Photo/N. Boak)

Some people play fantasy football to unwind, some participate in March Madness, and others vote in Fat Bear Week. Organized by the Katmai National Park and Preserve in southern Alaska, Fat Bear Week is a yearly competition that invites the public to choose and celebrate the brown bears that fatten up on salmon before hibernation. Katmai Natl Park Media Ranger Naomi Boak joined Living on Earth’s Bobby Bascomb to talk about why a fat bear is a healthy bear and how to join the fun.

CURWOOD: The rangers at Katmai National Park in southern Alaska are hosting a fishing derby, but in this case it’s not the biggest fish that wins, it’s the biggest one who catches fish. These contestants are very large bears, the eight and nine footers of Katmai, which is home to the largest concentration of brown bears in the world. These bruins can lose as much as one third of their weight while sleeping through the long cold Alaska winter, so summer and fall, they pack on extra pounds with sockeye salmon. And to let the public decide which bear appears to have caught and eaten the most fish, park rangers host a fat bear contest each year. People can watch the live stream of the bears snagging fish on the Brooks River in Katmai and then go to Facebook to vote for the ursine angler they think should be named the fattest. For details of the fat bear tournament Living on Earth’s Bobby Bascomb spoke with Katmai media ranger Naomi Boak.

BOAK: It's like March Madness for bears. We create brackets, and we have head to head matchups. And people from all over the world vote for who they think is the fattest bear this year at the Brooks River. And we have several bear cams here which stream live the activities of the bears all season. These bears are a lot of fun to watch. Really, fat bear week, for us, is not only a celebration of the end of the season, but it's also an interpretive and educational vehicle for us to let the world know about the lives of bears and their struggles and successes. And we're excited to start the competition!

BASCOMB: I was watching the live stream online and it's really fun just to watch these bear stand so stoically, and try and catch the salmon coming upstream. And that's how they're fattening up right now. Right?

BOAK: Yes, and they've been doing that all summer. We have one of the largest sockeye salmon runs here on the Brooks River. And it was a great salmon run; last year was record breaking. And the bears came back nice and healthy. And this year was another great year. The bears are really obese, and they're working very hard to be as fat as they can for their winters hibernation. It's amazing to watch.

BASCOMB: Now, tell me a bit about the bear biology. Why are we looking for the fattest bear? Why is that an indicator of a healthy bear? You know, a good muffin top on top of your bears, what you're really after here. 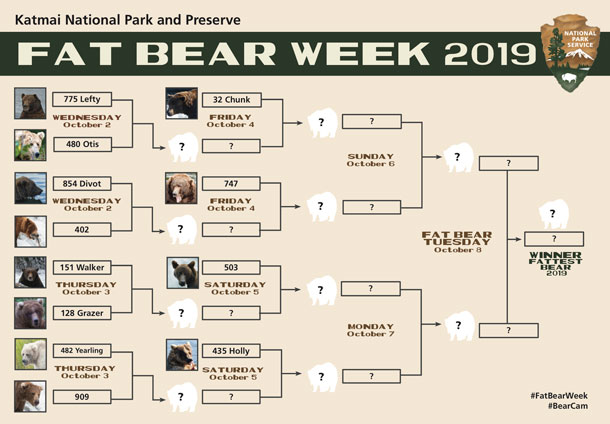 BOAK: In our world where obesity is not a good thing, it's hard for us to get our heads around the fact that obesity is a really good thing for bears. When they go into hibernation in the winter, they're not completely asleep. But they do not eat; they lose maybe 30 to 40% of their fat stores. So if they're not fat enough, they're going to have a hard time surviving the winter. And when they come out of hibernation in early spring, there's not a lot of food around. So they're eating grasses, it's not very nutritional, they will continue to lose weight. And for sows, it's important for them to get fat because they won't get pregnant unless they're fat. With bears, there's what's called delayed implantation. So the bears mate early in the season. Spring and early summer, mostly. But the eggs don't implant in the uterus until the sow is fat enough. So she has to get really fat in order for that egg to implant in the uterus. And if she's fat enough, when she goes to hibernate, that egg will implant in the uterus. And then the cub will be born in the den in January or February, and, it'll be about a pound.

BASCOMB: Wow, very interesting. Now you have some before and after photos on your website of some of these bears, and I gotta say they're pretty shocking. I mean, you can see the same bear when it comes out of hibernation in June, as you mentioned, and again in September, they hardly look like the same animal.

BOAK: No, they don't, which is why we want to celebrate what they've done all summer. And to really let the public know. And it's hard for us to identify the bears from the beginning of the year to the end of the year, they look so different. They change colors, they shed their coats, and the coats are different. And they're, you know, two, three times the size that they were in the beginning of the season.

BASCOMB: Yeah, I've been looking at some photos from last year. And I gotta say some of these bears are colossal. I mean, last year's winner, Beadnose I think her name was, looks more like a furry hippo or something than a bear. Her belly is practically dragging on the ground. Does she have some kind of special technique to get so big, you know, how is she catching her fish better than the other bears?

BOAK: Well, yes, she was very successful. But bears have different fishing techniques. They can be on the lip of a falls, which is a delicate balancing act, but it's a very great position to be in. Beadnose liked to do that. Another technique that the really big guys like is to fish in the jacuzzi, which is the eddy right below the falls. It's where the fish wait to make the jump up the falls. And these bears are big enough. So they can sit down on their haunches and with their front paws, fish. And so they don't have to move. They just have to fish with their front paws. And they get a lot of fish there. Very coveted spot. It's how those big boars get so big and you have to be a pretty dominant bear to maintain that spot. Some bears dive, not a lot of them. And we have a few bears that dive. And there's a very popular technique, especially this time of year, when a lot of floating dead salmon around, that's called snorkeling. Bears don't like to get their ears wet so they will snorkel. And all these techniques are usually combined by most bears to get as fat as they are.

BASCOMB: And how fat are they getting? I mean, how much did Beadnose weigh last year, if you can know? I don't imagine anybody's out there with scales trying to weigh these things. [LAUGHS]

BOAK: This year, our survey team actually took three-dimensional scans of several of the bears and two of the bears, who I won't reveal, because we want to have a fair contest...

BOAK: Inside information! Who we know to be the biggest bears. During the contest, we will reveal their weights, and their volume, and these 3D scans. It's very exciting and hasn't been done before. And it was quite a job for that group to get these scans because they had to get the bears out of the water. They're not under the water very often this time of year. 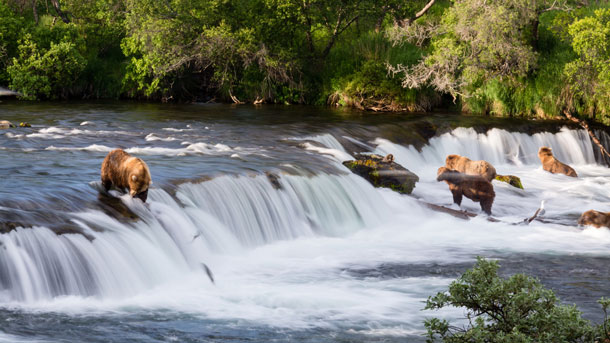 BASCOMB: Mhm. Well, I imagine there must be some grizzly competition out there!

BASCOMB: I know I had to, sorry!

BASCOMB: Um, what are some of the fan favorites this year?

BOAK: Well, let's see. Bear 747 is certainly a fan favorite. He is humongous. He looked like he was ready to hibernate back in July. Bear 435, Holly, who is a very famous female here. She has had several litters, and she actually adopted a lone yearling a few years ago. So it's made her a fan favorite. She is also ginormous. She does look like a hippo.

BOAK: She's really, really big. We have some bears, like bear 503, who is a fan favorite for a number of reasons. That bear is a young adult. He's around six years old. He was the bear who was adopted by Holly. So, bear cam viewers have watched this bear grow up into a really fun bear to watch. It's another great thing about the bear cams is, if you watch the bear cams year after year, you get to follow these individual bears. And it's like a soap opera! You learn about their personalities and their adventures. And sometimes it's fun, and sometimes it's sad, but those are three fan favorites that I would talk about.

BASCOMB: Um, do you have a particular bear that you're rooting for this year?

BOAK: I do. But, since I'm helping manage this competition, I can't say. But, secretly I've got a campaign poster in my cabin!

BASCOMB: [LAUGHS] I understand. I understand, you must remain impartial. It's understandable. Well, if somebody wants to get involved and vote for their favorite bear, how can they do that?

BOAK: Sure, everyone can get involved by going to Katmai National Park and Preserve's Facebook page. And starting October 2nd you can vote twice a day. And October 8th, the champion will be announced. The 2019 fattest bear at Brooks!

BASCOMB: All right, Naomi. Well, we will have to have you back on the show once you've crowned a champion and tell us who won.

BOAK: Be happy to return, with a picture of the fattest bear.

BASCOMB: Oh, I can't wait! Maybe this year it'll actually have a belly touching the ground. I think last year's was a couple inches shy.

CURWOOD: That’s Katmai media ranger Naomi Boak speaking with Living on Earth’s Bobby Bascomb. For links to the live stream of the fat bears of Katmai go to our website LOE.org.