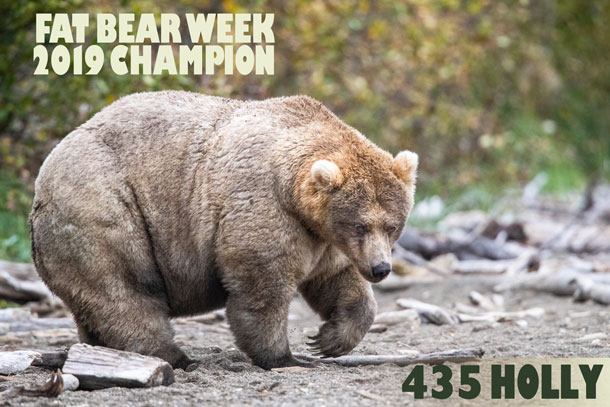 The 2019 Alaskan fat bear tournament is over and we have a winner! Fat Bear Week is a yearly competition organized by Katmai National Park and Preserve in southern Alaska to honor the fattest brown bear, since a fat bear has a better chance of staying healthy through the long winter months. Katmai Media Ranger Naomi Boak joined Living on Earth’s Bobby Bascomb to name this year’s corpulent champion.

CURWOOD: The 2019 Alaskan fat bear tournament is over and we have a winner. Now if you tuned in couple of weeks ago you might have heard about the fishing derby at Katmai National Park in southern Alaska that is for the big brown bears. And by fishing for sockeye salmon in the Brooks River these bears get mightily rotund as they fatten up for the long Alaskan winter. The public gets to watch them on a web cam, and from October second to eighth they got to vote for their favorite fat bear. So on what’s called “Fat Bear Tuesday,” the Katmai rangers unveil the champion big bruin. Katmai Media Ranger Naomi Boak spoke with Living on Earth’s Bobby Bascomb.

BOAK: The winner of this year's fat bear contest is bear, 435, Holly. And, she earned it!

BASCOMB: Oh, really? Well, how did she earn it?

BOAK: She's got so many rolls of fat, and she worked hard. It was very difficult to get a picture of her in September because she was always snorkeling for fish. She was hardly ever out of the waters. Matter of fact, one of the only times I saw her come out of the water was when she came out to dig a belly hole so that she could sleep and then go back to fishing again.

BASCOMB: Wow! So she was really hard on the job then?

BOAK: Oh, yeah. And, it really shows. So, I am very happy that she is our new queen of corpulence.

BASCOMB: [LAUGHS] Now what was the vote for Holly? Was it close? Or did she win by a landslide?

BASCOMB: Oh, wow! So, no contest then.

BOAK: No, no contest. And, I'm just thrilled that it's Holly. I mean, she exemplifies what it means to be a great brown bear. She's a famous bear on Explore's bear cams. She produces beautiful cubs. She is the poster girl for a fat bear.

BASCOMB: [LAUGHS] Did she have cubs with her this year?

BOAK: No. Which is one reason that she could get so fat. Because it takes a lot of energy for a sow to feed herself and her cubs and corral them so that they don't get into trouble with boars. But when a sow is single, like Holly, she's fattening up so she can get pregnant again, because she won't get pregnant unless she's fat enough. So we've got our fingers crossed that there'll be new little Hollys next year.

BASCOMB: Aw, I hope so. Now, I understand that this year, you did something new. You did 3D scanning of some of the bears for the first time to try to determine their weight, how much they actually weighed. I mean, nobody in their right mind is going to go out there and try to weigh a bear, right? But, uh, what did you find? How much did Holly weigh, if you know?

BOAK: Uh, well we don't know how much Holly weighed. We only were able to scan a few of the bears. It's quite a process and the bear has to be out of the water. And still, for 16 to 30 seconds. Our GIS team, the survey team, scanned 747, who is a huge bear. As big as his namesake. And, his volume was 23.5 cubic feet, which is the size of a double wide refrigerator.

BOAK: And, that's a pretty accurate reading. His weight is more of a guesstimate, which is probably pretty accurate for a bear at this time of year. Guessing about 1408 pounds.

BASCOMB: Wow, holy cow! I thought they topped out at like 1200 or so pounds? I'm no bear expert, but that's what I thought was the case.

BOAK: That's probably right. But, this bear is huge! Some people in the park say he is the biggest bear they've ever seen. And, these are Rangers who have been there for a long time. So, uhm, I was a little disappointed that 747 didn't do better in this year's competition. But, we have the scan to prove his size. 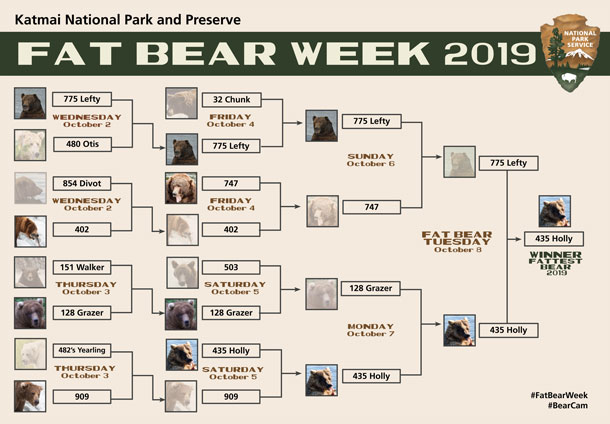 BASCOMB: Wow. And why do you suppose he didn't do better given his girth?

BOAK: You know, I don't know. I think it has somewhat to do with popularity. It also has to do with pictures. Because he's very difficult to photograph. I stalked him for a couple of weeks. And he's not out of the water very much. And when he is out of the water, it's the other side of the falls. But, he remains large in my heart.

BASCOMB: [LAUGHS] So, if these bears really wanna get bragging rights, they have to make themselves available for photographs?

BOAK: Absolutely! That's a big part of Fat Bear Week. Getting photographs all year long! We have to get skinny photographs of them in June and July. And, fat photographs as late as we can in September.

BASCOMB: So, Holly won but, who were the runner ups this year?

BOAK: Well, Lefty who is a bear who never used to come to the falls in July, and started doing that in 2015. And he had no idea how to fish. He would jump off the falls to try and catch a fish. It's not a good way to catch a fish at Brooks Falls.

BOAK: But, um, he learned and this year he would catch fish after fish after fish. UHM, 747 we talked about really put in a good strong effort and I think maybe he stopped because his belly might have touched the ground. So, uhm...

Yeah, it was close to touching the ground. He is really really big. And, Chunk, number 32 is another really, really big bear. And, I must also give accolades to another female bear 128 Grazer, who had to compete against Holly in a recent round. And, you can't recognize grazer from the beginning of the season to the end of the season. She has these big, white puffy ears and her face gets so fat it grows into her ears.

BOAK: So, uhm, I say kudos for grazer for putting a good show and was a good competitor against the new champion Holly!