The Snake River is a major river of the Pacific Northwest and is the largest North American river that empties into the Pacific Ocean. (Photo: Flickr, Jerry and Pat Donaho CC BY-NC-ND 2.0)

This week, Peter Dykstra and Host Jenni Doering kick off the segment with a call for scientists to receive support in dealing with the grief of ecological loss. They also discuss the mounting pressure to take down four lower Snake River dams which have contributed to the steep decline of salmon populations in the Pacific Northwest. And in the history calendar, they look back to a victory in what some say was the first environmental justice battle.

DOERING: It's time now for a look beyond the headlines with Peter Dykstra. Peter's an editor with Environmental Health News. That's ehn.org and dailyclimate.org. He joins us from Atlanta, Georgia. Hey Peter, how's it going?

DYKSTRA: Hi, Jenni. Gonna talk about an ecological disaster of a different kind. It's one that may be taking its toll on the mental health of scientists who study issues like climate change, extinction, habitat loss, toxic waste, cancer clusters, all the lovely things we cover here on Living on Earth.

DOERING: Oh, yeah. It's really hard not to get depressed doing this kind of work.

DYKSTRA: It is, even though there are also solution stories and at least occasional good news out there. There's a lot of bad news. There's a lot of risk. And because of that, some prominent scientists in the UK published a letter in the journal Science. Not a peer reviewed study, but a letter calling for academic institutions and other places that employ scientists studying the environment that those scientists should be supported, and quote "allowed to cry."

DOERING: Hmm, what kinds of other resources do they suggest giving to scientists?

DYKSTRA: Well, monitoring and a system that might be similar to the grief counselors that are sent into schools or workplaces that have had shootings or perhaps weather disasters. And scientists aren't the only ones, there are environmental activists, there are environmental journalists, in covering these issues every day, have a great potential to get really depressed by what we see.

DOERING: Gosh, well, we need them to keep doing the good work that they do. So, I hope that they do get the help they need. Well, what else do you have for us this week?

DYKSTRA: We'll go to the Pacific Northwest. The Snake River, the Columbia River, spectacular scenery, a lot of commerce and much of that commerce is enabled by huge dams on those rivers and some of the tributaries. They provide hydroelectric power, they allow for navigation, and they control floods. But those dams, as power producers, are beginning to become money losers. So the long push to remove those dams and have the rivers be free flowing is gaining some momentum.

DOERING: It's kind of surprising. I mean, they're so expensive and these dams, don't they provide a good source of low carbon, carbon free energy?

DYKSTRA: They do but they're costly in another way, and that's that they impede the migration of salmon. Salmon, of course, are a anadromous fish. That means they spend their life cycle in both fresh and saltwater. When they swim upstream to spawn, the dams are huge obstacles. There are fish ladders in the river, and other artificial, no pun intended, applications to help the salmon, but the populations have crashed. They're also threatened by disease, potentially by overfishing, and most definitely, by climate change. Add up all of those and removing the dams may be the best hope at saving the salmon.

DOERING: Hmm. So Peter, what's in the history calendar this week? 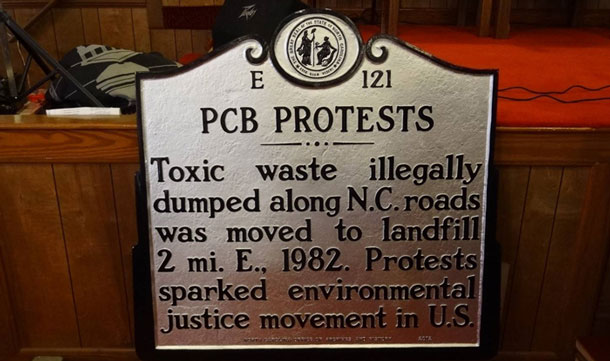 DYKSTRA: We're going to turn the calendar back to October 19th, 1982, Warren County, North Carolina. There was a victory in what many people regard as the first big environmental justice battle in this country. Warren County is a generally poor, mostly African American, largely rural county, and the state decided to cite a PCB dump in Warren County. PCBs, of course, are a notorious long lasting carcinogen. And, um, this sparked a huge and unprecedented protest, a month's worth of demonstrations in Warren County, and then the North Carolina capital city of Raleigh. The governor Jim hunt finally yielded to the protest, canceled the project. But here we are four decades later, and environmental justice issues still pop up on an almost everyday basis.

DOERING: Well, thanks, Peter. Peter Dykstra is an editor with Environmental Health News. That's ehn.org and dailyclimate.org. Peter, we'll talk to you next week!

DYKSTRA: All right, Jenni. Thanks a lot. Talk to you soon.

DOERING: And there's more on these stories at our website Loe.org.


The Independent | “‘They should be allowed to cry’: Ecological disaster taking toll on scientists’ mental health”

Timeline | “The EPA chose this county for a toxic dump because its residents were ‘few, black, and poor’”