BirdNote®: Green Birds and Brown Birds in the Tropical Rainforest 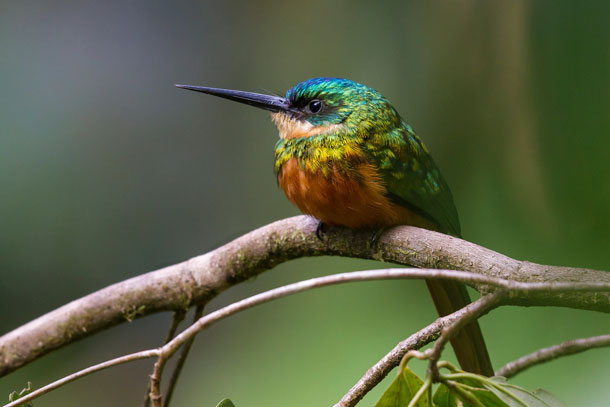 The tropical rainforests of the world are lush habitats home to thousands of different species, and their birds have evolved a tremendous variety of adaptations, from intricate courtship rituals to massive horned bills for cracking nuts. But as BirdNote’s Michael Stein reports, most rainforests birds do have at least one thing in common: their plumage.

Tropical rainforests are the most biodiverse terrestrial ecosystem on earth and home to some fifty percent of all the bird species in the world. Tropical birds have evolved a tremendous variety of adaptations, from intricate courtship rituals to massive horned bills for cracking nuts. But as BirdNote’s Michael Stein reports, most rainforests birds do have at least one thing in common.

BirdNote®
Green Birds and Brown Birds in the Tropical Rainforest

STEIN: The canopies of the world’s tropical rainforests are green year round.

So are many of the birds within them, from mostly green parrots and sparkling, iridescent hummingbirds, to trogons [pronounced tro-gahnz] and jacamars [JAK-uh-mahrz], with their shiny green backs. 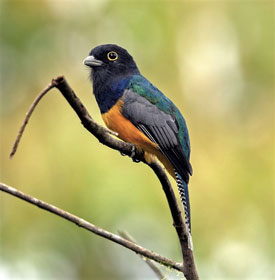 Male gartered trogons possess a yellow ring around their eyes that distinguishes them from other trogons. (Photo: Doug Greenberg, CC)

Their coloring underscores a fundamental of Darwinian evolution: “that an organism’s appearance, behavior and physiology must be adaptive to contribute to a greater overall level of reproductive success.” In other words, being green in the tropics means you won’t stand out and you have a better chance of reproducing, especially if you spend much of your time among the glossy leaves up top.

As for the vividly colorful birds found throughout the tropics, put them inside the forest, and their iridescent coloring becomes a dark disguise. Tropical birds that live in the shadows near the forest floor—antbirds, ovenbirds, and wrens—sport earth-tones of brown, gray, and black. Even the hummingbirds of the understory, known as hermits, wear drab plumage of gray, or brown, or only the dullest green. Camouflage almost as well suited for the deciduous forests of the north as the rainforests of the tropics. 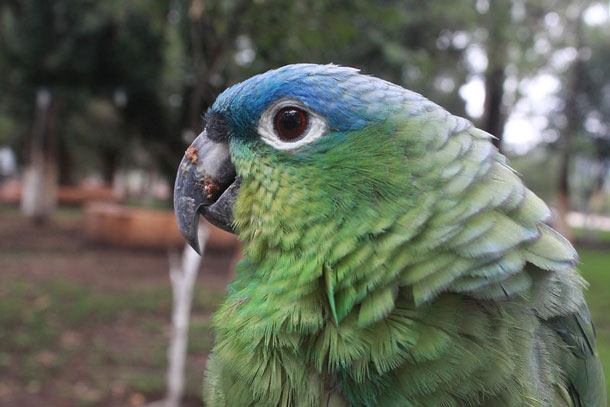 Although the mealy amazon parrot is not endangered, in some countries this bird is considered threatened due to habitat loss and the wildlife trade. (Photo: Terje Grimsgaard, CC)

BASCOMB: For photos flock over to our website, loe dot org


Learn more about this story on the BirdNote website

Find out more about the rufous-tailed jacamar

Learn more about the gartered trogon