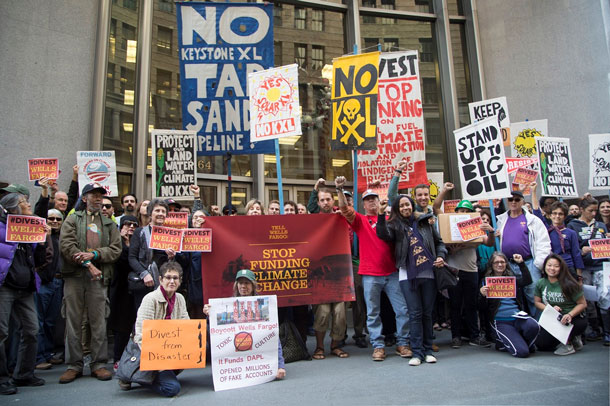 Protests against the Keystone XL Pipeline have been ongoing since its proposal by TC Energy in 2009. (Photo: Courtesy of the Sierra Club, CC BY 2.0)

On Oct 29 a nearly 400,000-gallon oil spill was discovered in the Keystone pipeline system in North Dakota, inundating a wetland with heavy crude oil mined from the Alberta tar sands. A controversial proposed extension of the Keystone pipeline system to the Gulf Coast known as Keystone XL has been the focus of ongoing protests and court battles, and the report of the spill came on the same day operator TC Energy was assuring regulators at a hearing it has properly considered environmental and safety impacts of the proposed extension. Sierra Club Senior Attorney Doug Hayes and Host Steve Curwood discuss the impact of the spill and the ongoing legal battle over Keystone XL.

The proposed Keystone XL pipeline link would bring tar sands oil from Alberta, Canada through North Dakota all the way to the gulf coast in Texas. The project has been in and out of the courts for years and continues to be a controversial point of protest, especially for Native Americans in the region. In response to a federal court order State Department officials recently held a public hearing about the project’s safety and environmental impact. That very same day nearly 400,000 gallons of oil spilled from a leak in an existing portion of the pipeline into a wetland in North Dakota. For more I’m joined now by Doug Hayes, a Senior Attorney at the Sierra Club. Doug, welcome to Living on Earth!

HAYES: Thanks for having me.

CURWOOD: These spills seem to keep happening. Talk to me, please about the history of Trans Canada Energy's pipelines when it comes to oil spills.

HAYES: Sure, well, the Keystone One pipeline was approved in 2008 and came online in 2010. At the time, they billed it as state of the art technology, one of the safest pipelines ever built. And it spilled thirty-five times in its first year of operation alone. So that was fourteen times in the United States and twenty-one times in Canada. And then in the last few years, we've seen at least four significant spills. So this pipeline spill in North Dakota was almost 400,000 gallons. In 2017, there was another spill of around 400,000 gallons in South Dakota. Also there were big spills in 2011 in 2016. A lot of these seem to have been caused by problems created during construction. So TC Energy seems to have some serious problems with their Keystone system.

CURWOOD: Doug, how does it strike you that at the same time that Trans Canada energy is trying to move the Keystone project forward, and in fact, they are at a public hearing in Billings, Montana that same day, you get this rather large spill, what does it tell you about the company?

HAYES: It certainly causes some concern and casts doubt on their assurances that this pipeline will be operated safely. The larger problem is that these pipelines cross, and Keystone XL in particular, would cross over 1000 waterways. One of the main concerns on the Keystone XL pipeline is the crossing of the Missouri River, which is just outside the Fort Peck Assiniboine Sioux Reservation in Montana. The pipeline would cross under the Missouri River just upstream from their water supply system. And that's just one of many places where a spill would cause catastrophic damage. Also, the pipeline would cross the Ogallala Aquifer and other important water resources in Nebraska, and other places along the pipeline route. 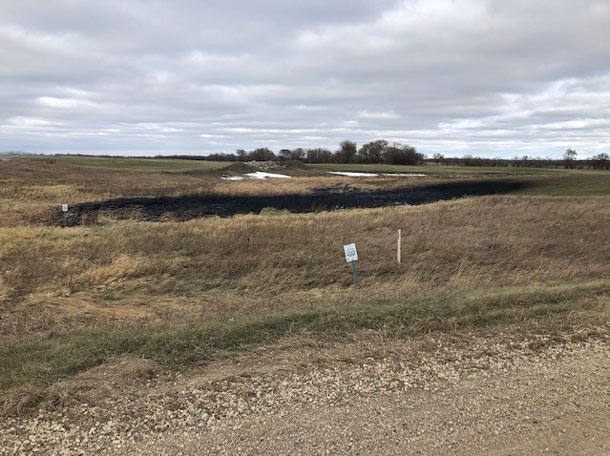 CURWOOD: Well surely there are more concerns than just drinking water. I mean, in a wetland, there are a number of creatures from amphibians, birds, all kinds of creatures that rely on drinkable water themselves.

HAYES: That's right. And the federal judge in Montana last year ruled that the State Department had not adequately analyzed the risk of oil spills to endangered species. So there are several endangered species on the pipeline route. Birds like the whooping crane, interior least turn, the piping plover, and in the Missouri River, there's the pallid sturgeon endangered pallid sturgeon. So you're right, the oil spill and any of these not just into the waterways, but anywhere along the pipeline route would have significant impacts to species that live along the route.

CURWOOD: What are the complicating factors in cleaning up these types of spills?

HAYES: The oil pipelines that carry tar sands crude oil pose unique risks because the tar sands oil is what's known as diluted bitumen. It behaves differently when released into waterways. So, if you think about a conventional crude oil spill onto waterways, a lot of it will float on the top and there's a certain spill response mechanisms that they can use, such as skimmers and booms and other things that would contain the spill. With tar sands crude oil or diluted bitumen it's much heavier and it separates, a lot of the properties fall to the bottom of the water column. So, a lot of those traditional cleanup technologies are ineffective for tar sands crude. So they're only just realizing, you know, some of these unique risks and coming up with ways to respond to tar sands spills. But so far the conventional cleanup technologies have proven ineffective.

CURWOOD: Now talk to me about the legal battles going on around the Keystone pipeline system. I gather that there's a lawsuit that your organization, the Sierra Club and other groups, including, what, the NRDC and the Center for Biological Diversity, the Bold Alliance, perhaps and others have against the US Army Corps. What is that suit all about, and what's its status? 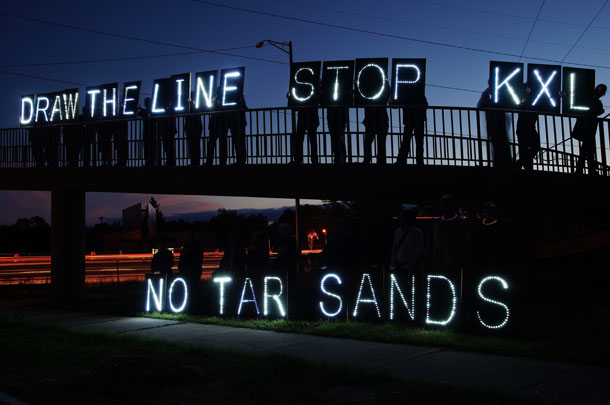 Diluted bitumen from Canadian tar sands is a heavy form of crude oil that can sink to the bottom of lakes and streams, contaminating waterways. (Photo: Joe Brusky, Flickr, CC BY 2.0)

HAYES: You're right, we have a coalition of environmental groups, including the ones that you just named have a lawsuit challenging the US Army Corps approval of the pipeline in federal court in Montana. And the lawsuit challenges the Army Corps streamlined approval process for the majority of the water crossings along the Keystone XL route. So as I said the pipeline will cross about 1200 different waterways. There are outstanding permits that the Army Corps still has to grant for the Missouri River crossing in Montana and that's the subject of the ongoing environmental review. So that approval has not happened yet. But the Army Corps has already approved the vast majority of the pipelines’ water crossings in the four states without doing any meaningful environmental review, without allowing the public to be involved without evaluating oil spills at all. It's a streamlined process that the Corps uses called Nationwide Permit 12. It's sort of a blanket approval, and that's what the lawsuit is challenging.

CURWOOD: So what's the status of the construction of completing Keystone XL right now?

HAYES: So TC Energy has not started construction of the Keystone XL pipeline. The injunction imposed by the Federal Court in Montana prevented them from starting any construction in 2019. They began to do some preconstruction work, which includes building the worker camps, stocking pipes in pipe yards and so forth but they did not complete all of that work in 2019. And just last month announced that they would not do any further preconstruction. So no single mile of Keystone XL pipeline has been constructed yet.

CURWOOD: To what extent does the future of efforts to complete the Keystone XL pipeline project depend on who occupies the White House a little more than a year from now? 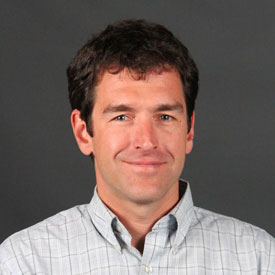 HAYES: Well, that's a good question. I mean, the State Department since 1968, has had a permitting process over cross border pipelines like Keystone XL. Last year Trump threw that out the window and said from now on, you know, the President will sign the permits himself or herself. And I think because he essentially scrapped the process altogether and made a unilateral decision, I think that you know, really opens the door to the potential for an incoming president to reverse that decision. If TC energy were to start construction of the pipeline next year, I think that it would not yet be operational by the time that January 2021 comes along and a new president comes into office.

CURWOOD: Doug Hayes is a senior attorney with the Sierra Club. Doug, thanks so much for taking the time with us today.

HAYES: Sure, happy to be here.