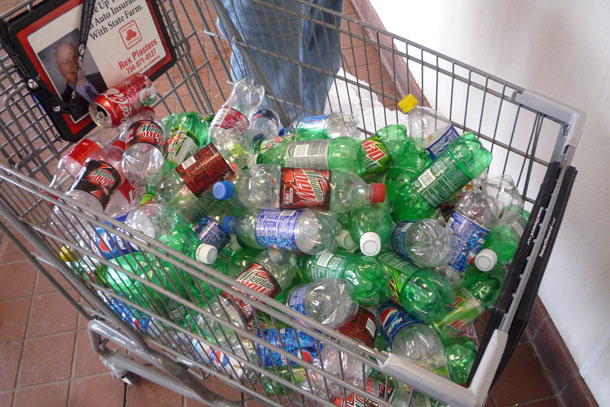 Plastic pollution has been found nearly everywhere on this earth, from the tops of remote mountains to the very bottom of the sea floor. It’s a daunting problem but one proven way to reduce plastic in the waste stream is a bottle deposit system which puts a nickel or dime fee on beverage containers. Living on Earth's Bobby Bascomb looks at the people who are cashing in on collecting containers, and those preventing others from doing so.

BASCOMB: And I’m Bobby Bascomb. Plastic waste has been found nearly everywhere scientists look for it. From the top of remote mountains to the very bottom of the seafloor. Plastic is literally everywhere, choking marine mammals, strangling sea birds, and polluting our own bodies. And a groundswell of anti-plastic sentiment is growing. Eight states and 55 countries have banned single-use plastic bags. Another proven way to keep plastic out of the waste stream is a bottle deposit system which puts a nickel or dime fee on beverage containers. And Steve, in those places I found that it not only helps to keep the streets clean but it can also put some money in people’s pockets. Listen, to these folks at a redemption center.

DANIEL: It’s good to get extra money. You know, if you don’t have any money you can get the cans and bring them here.

MATT: I do it for my mother in law. She sends it to her church in Brazil.

BARKER: I happen to put the cash in a piggy bank for my daughter for a fund for her, for her future. It’s a way to recycle and helps the environment. 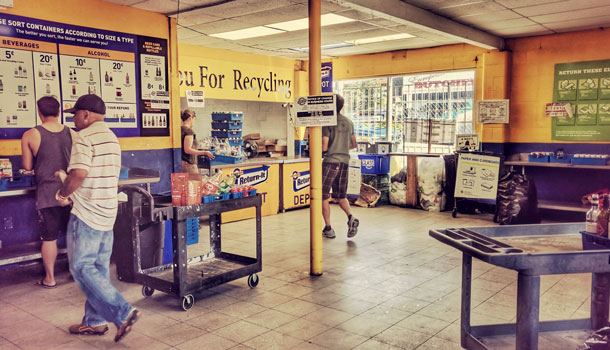 A bottle reclamation site in Burnaby, Canada. There are currently only ten states in the United States that have container deposit legislation. (Photo: Dennis Sylvester Hurd, Flickr, CC BY 2.0)

BASCOMB: Research shows that observation is true. States that have a 5 or 10 cent deposit on beverage containers recycle between 60 and 90% of their bottles and cans. States that don’t, recycle about 24%. And states with bottle deposits are cleaner says Judith Enck from Beyond Plastic.

ENCK: I lived in New York City and you walk down, you know, messy Manhattan streets or Brooklyn. You never see a soda or beer or water bottle on the street. People pick it up for a nickel.

BASCOMB: An Australian study found regions with a deposit system had 40% less bottle litter than areas without a deposit, with potential for a much higher rate. And states with a bottle deposit save money on their curbside pickup and recycling costs. Vermont saves about 11 million dollars per year, Massachusetts about 4 million and Minnesota close to 6 million. States’ savings vary depending on conditions. But add in additional savings from less litter to clean up, and it seems like a no brainer but only ten states have adopted bottle bills. The most recent one, in Hawaii, was 17 years ago.

Judith Enck says a big reason bottle bills aren’t more popular in the US is because of push back from the beverage industry using all those bottles.

ENCK: In the 41 states that don't have bottle bills, they have no responsibility for what happens. Whereas with bottle bills, they then have to take the material back and recycle it. And it's just an extra step they'd rather just sell their product and be done with it.

BASCOMB: Judith says the beverage industry in general, and Coke in particular, have worked hard to kill any new bottle bills.

ENCK: The first bill I ever worked on when I was a college student was the New York bottle bill and Coke was vigorously opposed.

BASCOMB: Judith is singling out Coke at least in part because they’ve been named the world’s largest brand producer of plastic waste. A recent global audit of litter conducted by Break Free From Plastic found more Coke products than the next 3 largest producers combined. But Coke recently announced very ambitious recycling goals. Among them, to recycle the equivalent of every bottle and can they produce by 2030.

ENCK: You have Coca Cola greenwashing, they say that they support recycling, and yet they vigorously oppose bottle bills across the world. So I think they're being, you know, very hypocritical.

BASCOMB: Coke financially supports recycling organizations around the world. But critics allege that they use that money as leverage and get recycling groups to discourage new bottle laws themselves and spare Coke the need to publicly oppose a legislation that’s been proven effective. 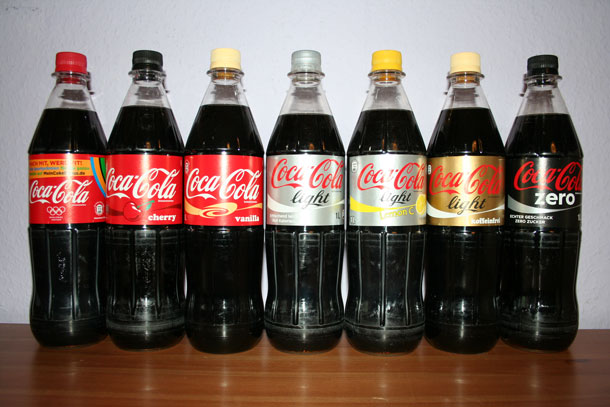 In 2018 and 2019, Coca-Cola was named the brand with the most plastic pollution based on a global audit of plastic waste conducted by Break Free From Plastic. Break Free is an NGO advocating for a world without plastic pollution. (Photo: Like_the_Grand_Canyon, Flickr, CC BY-NC 2.0)

The Intercept recently released a leaked audio recording from a recycling coalition meeting in Atlanta. In it a representative from the Atlanta mayor’s office raises the idea of enacting a bottle bill. It’s quickly shot down by Kanika Greenlee, a board member of Keep America Beautiful and then Gloria Hardegree from the Georgia Recycling Coalition. Both organizations are funded in part by Coke.

GREELEE: Yeah, my fear is that - not that the bottle bill is not like a worthy conversation - but I worry that it may jeopardize the funding that we have in place.

HARDEGREE: With the investment that Coke is getting ready to make in Atlanta and in other major cities across the U.S. it is not going to be a part of that conversation. We can either do it their way or we can drop out of participating, you know, in the funding that they’re getting ready to provide.

ALEXANDER: It really doesn't begin to address the systematic change that is necessary.

BASCOMB: Instead he points the finger at consumers and municipal processers.

ALEXANDER: The difficulty lies in collecting the material and sorting it, so it's available for recycling. Recyclers can recycle anything, as long as it's made available them to the recycle, and that's the big issue we face, we just can't get enough material.

BASCOMB: States with a bottle deposit often have reverse vending machines that read a bar code on each bottle and can so beverage companies can get their products back for recycling. In the 1950s when coke was dispensed in glass bottles they actually had a self-imposed deposit of 40 cents. Coke wanted their expensive glass bottles back so they could reuse them. But today virgin plastic is cheaper than recycled plastic so Coke can cut costs by avoiding recycling.

Critics say producers of the waste clogging our rivers and choking marine life should bear more responsibility for its cleanup, but media campaigns by the industry put the burden on consumers. It may be justifiable to shame litterbugs, but back in 1971 a now famous ad was released that shows a man in Native American dress paddling a canoe through a river full of trash.

ANNOUNCER: Some people have a deep abiding respect for the natural beauty that was once this country, and some people don’t. People start pollution. People can stop it.

BASCOMB: The end of the PSA is a close up of the man’s face, showing a single tear rolling down his cheek. The man, by the way, is actually Italian not Native American. And the commercial was produced by Keep America Beautiful, funded by the beverage industry, including Coke. It aired the same year Oregon passed the nation’s first bottle bill just as states across the country were taking a hard look at enacting their own. In the end, only 10 did.

Today industry claims it wants more recycled plastic in their products. Coke has a goal of upping the content of their bottles to 50% recycled plastic. Most bottles are currently about 7 percent recycled content. Indeed, Steve Alexander from the Association of Plastic Recyclers says they can’t meet current demand and certainly can’t keep pace with the stated goals.

ALEXANDER: We have more capacity today to recycle more material. And there's investments that's lining up just waiting to build more recycling capacity, if in fact, we can get the material.

COLLINS: So, what the beverage container manufacturers want is beverage containers that have gone through the container deposit system where they know for sure that it's only beverage quality material that was put into that system in the first place. And it's not anything else. It's not salad oil, it's not cleaning products.

BASCOMB: Recycling cleaning products along with soda bottles could result in a product that has an odor or is unsafe for beverages.

COLLINS: So they'd like to have the material for use in their products, but they don't want to have to pay for the collection of the material. And that's why they fight beverage container deposit laws.

CURWOOD: Well, thanks for that report, Bobby.

BASCOMB: Sure thing, Steve. And I want to point out that we reached out to Coca Cola for a response on this and they sent statement which said, in part:
“We participate in deposit collection systems around the world.
We’ve learned a lot over the last 40 years of their operation.
We know that collection and recycling is a highly local issue and there is no one size fits all solution.”

CURWOOD: And what about Keep America Beautiful?

BASCOMB: Right, I spoke to Noah Ullman, he’s the Chief Marketing Officer at Keep America Beautiful. In terms of their support for a bottle bill he has essentially the same message as Coke.

ULLMAN: We know through our experience with the affiliates is that recycling is always a local issue.

CURWOOD: Hmm, ok. What about the tape from that meeting in Georgia? It sure sounds like Keep America Beautiful is saying no to a bottle bill because Coke is holding their purse strings.

BASCOMB: Right, I asked Noah about that but he denies it and says that recording was taken out of context, which is the same thing I heard from Gloria Hardegree from the Georgia Recycling Coalition. Which, by the way under its bylaws is neutral on the issue of a bottle deposit system.

CURWOOD: Hmm… Well you reported that the last bottle bill in the U.S. was passed back in 2002. What does the future look like for bottle deposit systems going forward?

BASCOMB: Well, we’re playing catch up to the world, Steve. In just in the last 2 years the number of people around the world living in a region with a deposit system has doubled from 300 million to 600 million and could reach 1 billion in a decade.

CURWOOD: So Bobby, what about the U.S.?

BASCOMB: Well 6 states are currently considering a bottle bill and Democratic senator Tom Udall from New Mexico includes a national bottle bill in his proposal to reign in plastic pollution.

The Association of Plastic Recyclers