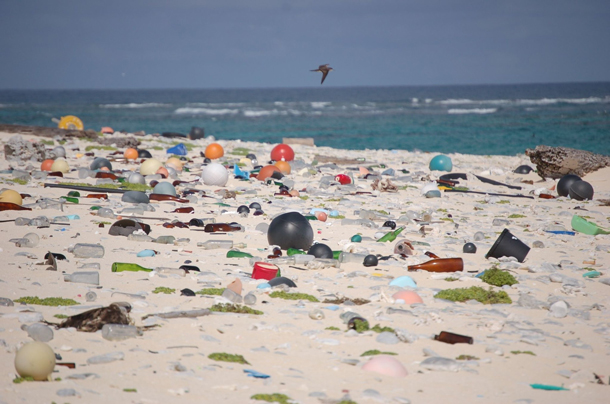 As more and more plastic waste escapes into our environment, recent research estimates that as much as a credit card’s worth of plastic makes its way into our bodies each week. Senator Tom Udall (D-NM) and Congressman Alan Lowenthal (D-CA) aim to curb the plastic waste crisis with a draft bill that would ban certain single-use plastics, institute a 10-cent nationwide container deposit, and compel producers to take the lead on recycling. They invite the public to comment on this proposed legislation by November 21. Senator Udall discusses with Host Bobby Bascomb why federal action is needed to address the growing plastic waste crisis.

BASCOMB: 6 states are currently considering a bottle bill and Democratic senator Tom Udall from New Mexico includes a national bottle bill in his proposal to reign in plastic pollution. And I spoke with him about it recently, here have a listen.

BASCOMB: Yeah, that really is a shocking statistic. Well, this draft bill has a lot of different parts to it, but let's unpack a few of the big ones, including the requirement for plastic producers to take on some of the responsibility for collecting and recycling plastic waste. How exactly would that work?

UDALL: Well, one of the main principles of the environmental law is called, the "polluter pays". This is used in environmental laws across the board in the United States. The producers of these products need to pay for the collection and recycling of their materials, not pass the cost on to consumers and local government. And I think if producers are expected to be responsible for managing their waste, they'll design less wasteful products. 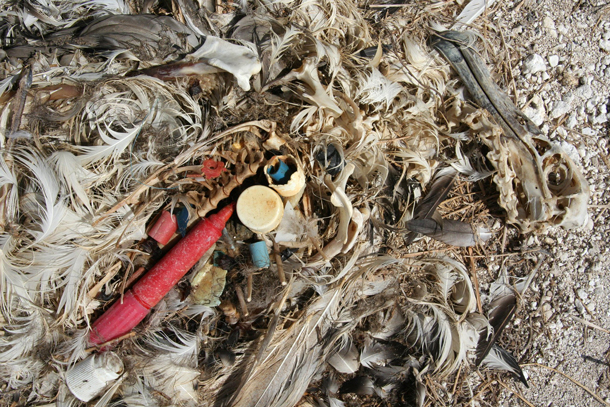 BASCOMB: Mm-hmm, or maybe products that are more easily recycled to begin with.

UDALL: Absolutely. The key here is getting the producers to start working on recycling rather than them shifting it over to consumers and local governments. As we all know, what's happening in America is local governments are spending huge amounts of money, and yet we're only recycling a very small quantity of the waste that goes in to the waste stream.

UDALL: I think it's all of them that you've mentioned there. You can imagine how broad this is. And they're represented in Washington by the Chemistry Council, which is very active, and I've worked with them before on toxic chemical legislation under what was called TSCA, the Toxic Substances Control Act. But we're talking about the brand makers.

BASCOMB: Mm-hmm. Now, I recently spoke with the President of the Association of Plastic Recyclers, and he told me that the real problem is the way that we collect and process recyclables in this country. So there's no national or state standards; even from town to town, it can be done so differently, that there's no uniformity with the product that they get out of recycling. How would you address that concern?

UDALL: Well, I think one of the things we need to do is put some uniformity into it. For example, if you have a nationwide container deposit; states have those container deposit laws where material is returned at much higher than the national average. Let me give you an example here, last year, Oregon recycled 90% of the containers covered by its bottle deposit system. So we've got a proven method to make sure we get good clean material back for recycling. 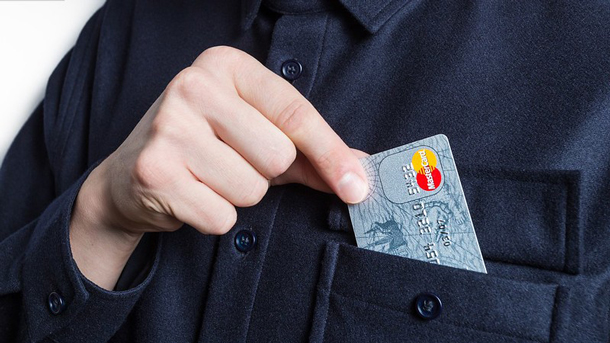 A recent study found that globally, the average person could ingest about 5 grams of plastic every week, the equivalent of a credit card. (Photo: cafecredit.com, Flickr CC BY 2.0)

BASCOMB: And that's another significant piece of your proposal here, is a national container deposit of 10 cents per bottle.

UDALL: Well, it's an important component because it's going to push us in terms of the higher number on recycling. 90%, the number in Oregon, is a big number. We're lucky if we hit 10% in terms of actually recycling things that go into the waste stream. And you know, there's no doubt that this has a huge climate impact. Plastic can produce as much as 56 gigatons of carbon dioxide between now and 2050. That's 50 times more carbon emissions than all the coal fired power plants in the United States produce in a year. So there's a huge carbon footprint.

BASCOMB: And how would you get industry on board? Until now they've been somewhat dragging their feet on supporting bottle bills across the country.

UDALL: Well, what we're doing is putting out a draft, we're meeting with industry, we want to hear their comments. The reason we have this discussion draft out there, up until November the 21st, we're asking everybody -- industry, citizens, consumers, everybody out there -- give us your comments, because we want to try to work with everybody to get a very good bill. I think it's, it's important that we focus on that in this process. If industry doesn't want to work with us, then we'll move ahead because we know there's such strong public support.

BASCOMB: Yeah, there certainly is across the country, this patchwork of banning single-use plastic bags and things like that. And that's something else that you're including here. You know, banning Styrofoam cups and plastic cutlery. Why do you see that as a necessary thing to do? 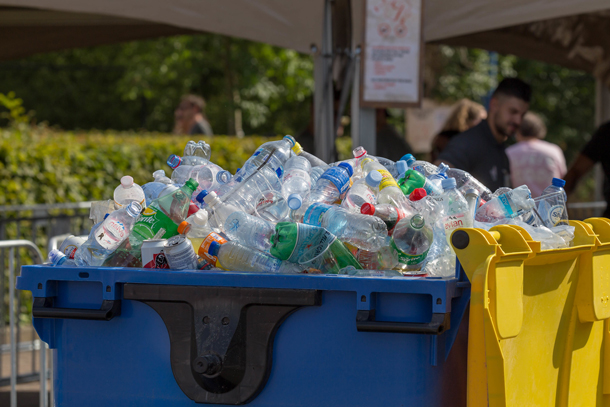 UDALL: Well, so many items like plastic bags and cutlery are not recyclable. There are many alternative products that are out there. So a ban on single-use plastics would help grow markets for those alternatives.

BASCOMB: Now, you're also calling for a moratorium on new plastic facilities. Does that include ethane cracking facilities that are popping up across Appalachia?

UDALL: Oh, absolutely. What we're really focusing on is the ethane crackers. And as you know, the oil and gas industry is building these new energy-intensive plants to create virgin plastic. And when you look at these ethane cracker plants, their carbon impact is enormous, their carbon footprint is very big, they harm the surrounding communities. And those communities are often disadvantaged. And what you're talking about there is getting to the heart of environmental justice. A temporary halt on them, I think, would allow us to study the effect they have on our environment and update EPA regulations. So those plants are critical to focus on. 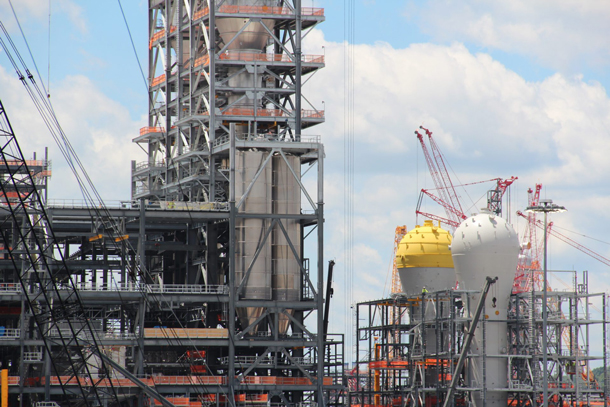 Ethane is a key ingredient for plastic. Above is an ethane cracker owned by Shell Oil under construction in June 2019 in Beaver County, Pennsylvania. (Photo: Reid R. Frazier, Courtesy of The Allegheny Front)

BASCOMB: Now, the vast majority of plastic is made from fossil fuels, increasingly natural gas, and the fossil fuel lobby is, of course, very robust in Washington. To what degree do you think pushback from the fossil fuel companies will be an issue as this legislation moves forward?

UDALL: Well, I think we're, as you can see by some of the chemical companies that have stepped forward, we're going to get pushback here. Obviously, plastic pollution isn't the issue that only affects Democrats or Republicans. I really think people are waking up to this. And they're demanding we do something about it. And we want to get bipartisan support, we want to involve industry. And we're hearing from a lot of offices, including some Republicans about this. We have a great partner we're working within the House, Alan Lowenthal, and he's telling me there's a lot of activity over there. So we feel very good about it. Of course, major industry players are going to oppose some of this, but they're going to have to come to the table, and I'm confident they will. There is so much work at the local and state level. But the debate in Washington DC is lagging, so I'm working to change that.

BASCOMB: And are you working with any citizens' groups or or nonprofits to craft this legislation?

UDALL: Oh, absolutely. There are several -- Beyond Plastics is one; Surfrider; Oceana. And there are many others that are working with us. 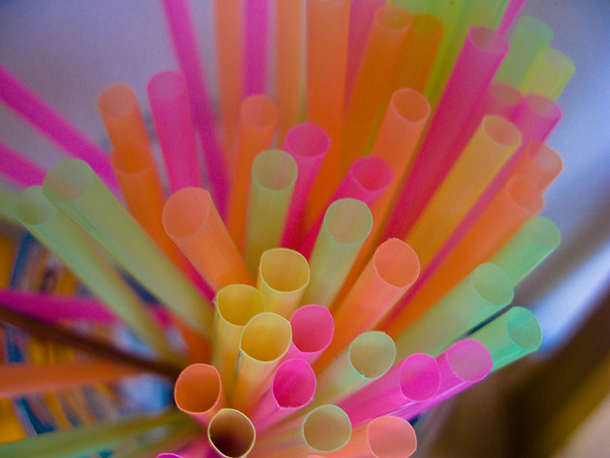 Plastic straws, which are nearly impossible to recycle, would be banned under Senator Udall’s bill except for disabled people who depend on using them. (Photo: abbyladybug, Flickr CC BY-NC 2.0)

BASCOMB: So how might the hearing process proceed with this to get all of this information on the legal record?

UDALL: We're going to push very hard here in the Senate. One of the things we may be able to do is work with pieces of legislation that have similar ideas, and try to amend them and we're looking for opportunities there. The House had a hearing on this last week; I think there's a great deal of interest in this in the House. And so having the House send us something over to the Senate would add some momentum there. One of the other things that I wanted to note is when we talk about support overall, the movie star Ted Danson was here in Washington, and he was expressing how there is a real grassroots movement out there; he's pushing this legislation and he really believes we need to do something on plastics and it has to be sooner rather than later.

BASCOMB: Senator Udall, we've all seen these horrifying pictures of seabirds with their bellies full of plastic and marine mammals just full of plastic. And as you mentioned, a credit card's worth of plastic in our bodies each week. Did you have an "aha" moment, you know, something that just struck you and you thought, "God, I got to do something about this, enough is enough". 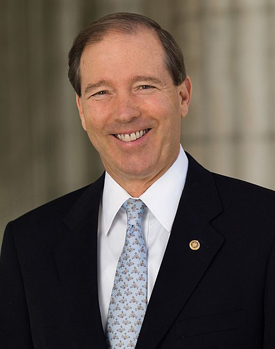 Senator Tom Udall (D-NM) has announced he will not run for re-election in 2020, but plans to remain engaged in public service through other means. (Photo: U.S. Senate, Public Domain)

UDALL: As I said, we see it every day. I mean, I, I get up in the morning and go to the gym very early. I end up picking up plastic, walking over and walking back, and putting in the recyclable bins and hoping that it's actually going to be recycled. The one really moving thing to me was seeing that sperm whale, this was very recently, that was washed up; it was dead. They did an autopsy and they determined that more than 80 pounds of plastic were within the insides of the sperm whale and that that's what killed it. And so that's something that really breaks your heart, if you're someone that cares about conservation, cares about wildlife, and cares about preserving the out of doors for future generations. I mean, Mother Nature is pretty special. We should be taking care of her.

BASCOMB: Democratic Senator Tom Udall serves the state of New Mexico. Thank you so much for taking this time with me.

UDALL: It's been great being with you today.


Read the discussion draft of the Udall-Lowenthal plastics bill