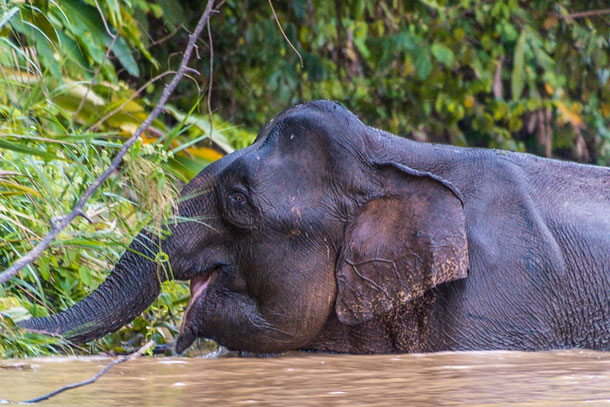 The Borneo pygmy elephant is gentle-natured and the smallest species of elephant in Asia. (Photo: Photo by John Cannon, Courtesy of Mongabay)

The 2,000-km Pan-Borneo Highway will connect the remote regions of the three nations that make up the island, Malaysia, Indonesia and Brunei. But conservationists worry that this highway will fragment crucial habitat for rare species like pygmy elephants, proboscis monkeys, and the banded langur. Mongabay staff writer John Cannon traveled the paved and yet-to-be-paved portions of the highway and spoke to Host Bobby Bascomb about his experience.

BASCOMB: The rainforests on the island of Borneo are gems of biodiversity, with thousands of species of plants and animals found nowhere else on earth. And there will soon be 2000 miles of pavement that will connect the remote regions of the three nations that make up the island, Malaysia, Indonesia and Brunei. The Pan Borneo Highway will make it easier for eco tourists and residents alike to move in and out of this lush landscape, which is home to several World Heritage sites. But conservationists worry that the road will also make it easier for illegal loggers and poachers to plunder those natural treasures. Mongabay reporter John Cannon traveled the paved and yet to be paved portions of the highway and wrote a six part series about his journey for the online magazine and he joins me now to share his experience. John, welcome to Living on Earth.

CANNON: Great, thanks so much for having me.

BASCOMB: You write that the rainforests in Borneo are some of the oldest in the world, on the order of 130 million years old. And of course, it's an island, which it usually means that species evolve very differently than the surrounding area. Can you tell me about some of the species living there that you encountered?

CANNON: Going back to Darwin, you know, he, he was one of the first scientists to note how differently species evolved when they're placed on these islands and allowed to kind of evolve separately from their close related species. So when you give animals millions, or in this case, tens of millions of years to kind of evolve independently, you have these really sort of unique traits that come out of this genetic mixing pool that is evolution. So if you look at for example, Borneo's subspecies or species of elephant, it's quite a bit smaller than the Asian elephant you'd find across the tropics, and its tusks have this sort of pink hue to them, which is really interesting. They're found in this, in rather large numbers still in the northern state of Sabah in Malaysian Borneo. And then you have this wide variety of primates that live across the island and everything from orangutans, to monkeys, and in some cases, you have species of monkeys that exists in maybe just a few dozen individuals. But they have kind of evolved separately to live, say, just in the tree canopy in places like that. The different habitats that you find in Borneo are quite unique in that they produce these different species as evolution happens over time. 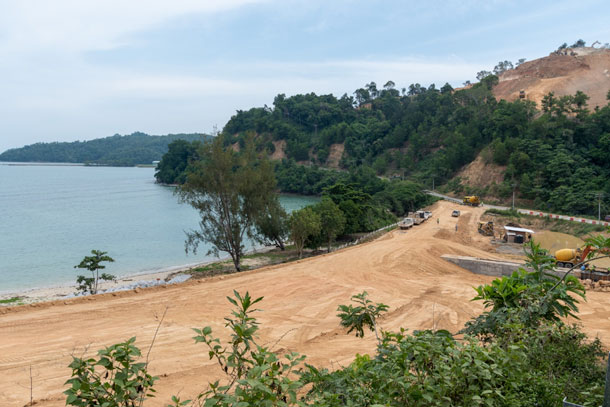 Part of the Pan Bornean Highway will run right along the coast of the South China Sea. This picture shows construction near the town of Kota Belud in the Malaysian State of Sabah. (Photo: John Cannon, Courtesy of Mongabay)

BASCOMB: And now the government wants to build a highway across the island. What are the concerns with that?

CANNON: Roads, especially in the tropics can be very damaging ecologically. You know, a lot of research over the past couple decades has shown that when a road enters an area, the people are very quick to follow that. So they'll come in, they'll set up settlements, they'll start cutting down the forest for farms, they might start hunting the animals in those areas. What it tells us is that roads are really the access point for us as humans. To get to these kind of farther flung places, and that when we do go into these places, we're going to be affecting the other species that are already there. So the road will cut through the southern Malaysian state of Sarawak. If you follow that road down further all the way to what they call the southwestern tip of Borneo, you'll get to a wildlife sanctuary and then a national park and the national park specifically has some beautiful primary forest. It's just, it's full of unique animals. You have a Bornean banded langur that lives down there. And this is a very rare, endangered species that exists maybe in two or three places on the entire island of Borneo. So the big concern in places like that is if you build a road, all of a sudden again, your bringing people into this area and they might start hunting that animal or they start cutting down trees to set up their farms, so that they can feed their families. That would also cause problems for their species like the langur or whatever else happens to be living in the forest.

BASCOMB: Well, what accommodations are they making for wildlife in the area to make the road safe for them? 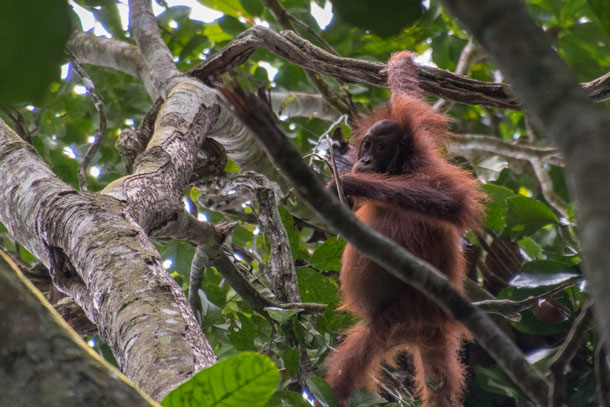 CANNON: So there are a bevy of tools, I guess you could say that crews can put in to allow say wildlife populations to move from one side of the road to the other without causing problems for themselves and motorists. I mean, you can imagine what a herd of elephants crossing a road where people are traveling 60, 70 miles an hour, how devastating that can be for everyone involved. There are these underpasses where they could dig a sort of tunnel basically underneath the roadway, and that the idea being that animals could move from one side to the other. They also talk about overpasses basically, you know, just building a bridge. The best examples of this create like this sort of natural surface that goes over the top of the road. So those are some of the, I guess the tools that they could put in place to, I would say lessen the impacts on wildlife.

BASCOMB: So how effective are these overpasses and underpasses at protecting wildlife? 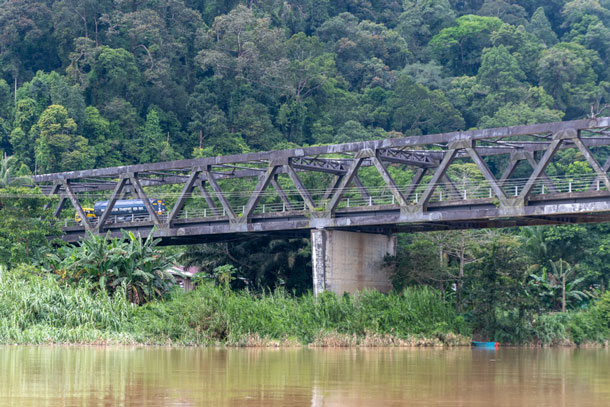 The Pan Borneo Highway will consist of a four-lane dual carriageway and is expected to increase development in rural areas of Malaysia between Sabah and Sarawak. (Photo: John Cannon, Courtesy of Mongabay)

CANNON: I think there are a lot of concerns that scientists and conservationists have about the efficacy, I guess, of some of these tools that are used to connect wildlife populations when a roads put in. It might sound like an easy solution to just put a bridge in, and that's where the animals will pass. But as anybody has a pet knows that, you know, animals aren't always cooperative, especially wild animals. So they might not choose to take that particular route across the road. There's, you know, I've seen footage of elephants crossing, you know, these four foot high dividers in the middle of the road, because that's where they want to cross, they're not necessarily shuttled to these particular areas where there might be a bridge or an underpass or something like that. Another issue is with that is, if you have an underpass or a flyover or something like that, it's really important that it connects to good sections of habitat. So if it went, say from a palm oil plantation to a palm oil plantation where there's not a lot of wildlife, it's very unlikely that the wildlife are going to use that particular route to go across or to cross the road. So they're probably going to try to find a different way across. And then there's been research in Peninsular Malaysia that has shown that these underpasses or overpasses can kind of become pinch points, where predators including humans, human poachers, in some cases, will actually wait. So even if the wildlife does end up using this area, that's an area that say a tiger or a person might say, well, hey, I know that these animals can really only cross this road in one place so they'll just wait at the end of these sort of tunnels and it's an easy, you know, it's an easy meal if you're a predator and easy kill if you're a poacher. So the jury's still out on how effective these tools can be. I think a lot of the scientists in Borneo are really willing to give them a shot because they want to try to make every effort to keep these wildlife populations connected, but they're not a silver bullet unfortunately.

BASCOMB: You spoke in your article to the Minister of Works for Malaysia who said it took him several days to walk to school as a child. And that's why he's building this road, so other children in his community and around Borneo won't have to make that long trek to school. Does that ring true to you? And I mean, honestly, as a foreigner going there, I mean, you are American, you grew up taking the bus to school. It's maybe difficult to go to these places and look at them, and say, no, no, you shouldn't build a road, where I grew up with a road, but you shouldn't have one. Do you feel that sense of conflict at all? 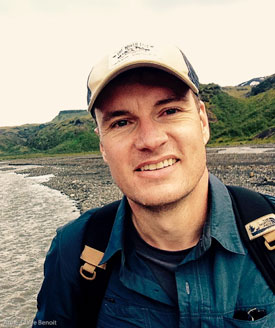 John Cannon is a staff writer for Mongabay. He traveled the length of the Pan Borneo Highway for three weeks documenting the overall effects the road could have on local communities and the surrounding ecosystem. (Photo: Courtesy of Mongabay)

CANNON: Absolutely. Yeah. That was that was something I struggled with. I think it was something that made this reporting very difficult because I've spent the time with the ecologists who are very concerned about the impacts that this will have on you know, what is some of the last best remaining rain forest on Earth. But they, just like me, I think are conflicted as well. Sitting down with Baru Bian who's the Minister of Works, and hearing his enthusiasm for building this road to connect his people. I mean, these are literally his relatives who in one stretch of this road that their lives will be made a bit easier if the promises of the road pan out. It's very easy to be sympathetic to his support for building a road that will connect people to markets and schools and health clinics.

BASCOMB: John Cannon is a staff writer for Mongabay. John, thanks for sharing your story with us.

CANNON: Thanks so much for having me.