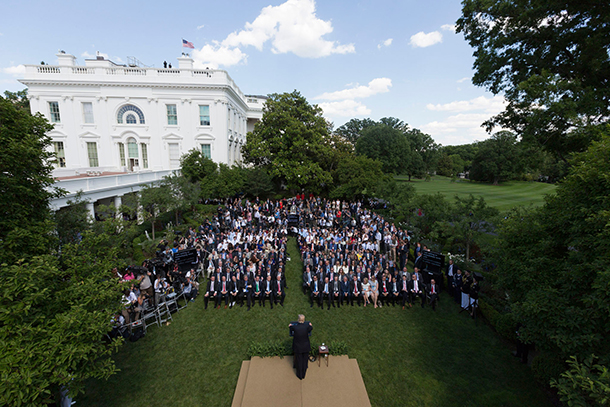 President Trump addressed a crowd in the Rose Garden on June 1st, 2017, when he announced he would withdraw the United States from the Paris Agreement on climate change. (Photo: Official White House Photo by Joyce N. Boghosian)

Climate negotiators from the world are gathering in Madrid, Spain starting December 2 with challenging items on the agenda. One issue concerns cooperation between developing and developed nations and emissions trading. Another concerns how to handle loss and damage from climate-related disasters. And front ad center is the enormous gap between the present commitments of the 195 nations that are party to the Paris Climate Agreement and what UN scientists say are needed to avoid catastrophic climate disruption. Alden Meyer of the Union of Concerned Scientists discusses with Host Steve Curwood.

At the beginning of December UN negotiators will move to advance the Paris Climate Agreement in a meeting that was hastily shifted to Madrid, Spain in the face of civil unrest in its originally planned site, Santiago, Chile. Earlier this month President Trump officially set in motion the withdrawal of the United States from the accord, though it won’t take effect until the day after the 2020 US presidential elections. And though every other nation is still in the Paris agreement, less than a handful have made pledges that would have a chance of keeping the planet from catastrophically overheating. Alden Meyer, Director of Strategy and Policy for the Union of Concerned Scientists, is here to explain. Welcome back to Living on Earth, Alden!

CURWOOD: Alden, I keep hearing that the Paris process is far behind what's needed. What exactly are the numbers at this point, what have nations committed to and what's the gap for what many would say is necessary? 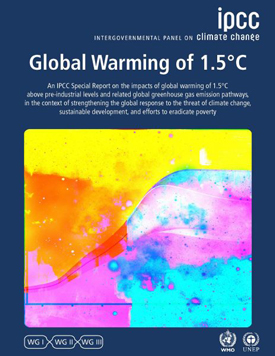 In October 2018 the Intergovernmental Panel on Climate Change released a Special Report on the impacts of global warming of 1.5°C above pre-industrial levels. Its dire warnings drew the world’s attention. (Photo: IPCC)

MEYER: Well, basically, you'll recall that leaders set a goal of keeping the temperature increase above pre-industrial levels well below two degrees Celsius, that's 3.6 degrees Fahrenheit for those keeping score at home, and trying to get as close to 1.5 degrees Celsius as possible. Analyses vary a little bit, but they tend to say that we're on track for around three degrees Celsius or more. That may not seem like a huge difference, but the Intergovernmental Panel on Climate Change report last year on 1.5 degrees show that there's a huge difference even between 1.5 and two degrees Celsius. Every 10th of a degree matters. And to get on track to stay below two degrees analysis by the United Nations Environment Programme and others show that we would need to basically triple the level of ambition of commitments that countries have made under Paris. To have a chance of getting anywhere close to limiting temperature increase to 1.5 degrees, we would need to quintuple, in other words increase by five fold, the level of ambition in Paris. So what's needed here is not incremental changes around the margins. It's really a wholesale transformation, getting on the path to cutting emissions nearly in half by 2030 globally, and to net zero emissions no later than 2050. It basically involves remaking almost every sector of the modern economy.

CURWOOD: And, of course, the process, the UN negotiation process continues; the Conference of the Parties, the UN umbrella for the Paris accord, on December 2, the annual meeting of that starts in Madrid, what needs to be done at that session? 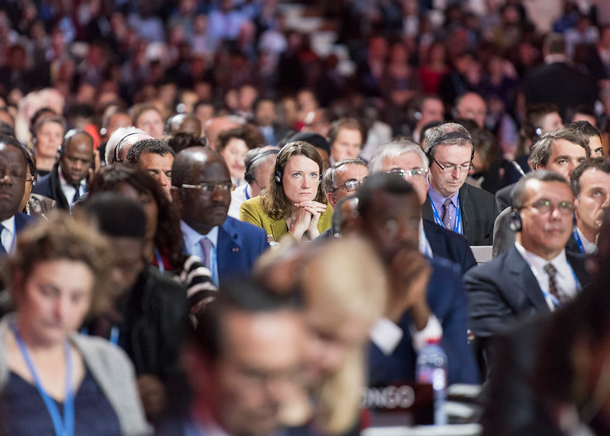 MEYER: Well, there's a few issues on the formal negotiating table that have to be resolved. The one unfinished piece of business from the last climate summit in Poland last fall was completing the part of the Paris Agreement calling for collaborative approaches to emission reductions: emissions trading, cooperation between developed and developing countries. It's the so-called Article Six of the Paris Agreement. It's both a very political issue and very technical, and you put those two factors together, it makes it difficult for countries to resolve their differences. The other major issue on the table is what's known as loss and damage, which is the unavoidable impacts now of climate change on vulnerable countries around the world. After they've done everything they can to reduce their emissions, everything they can to build in resilience measures to their economy, there are still going to be sudden impacts such as typhoons and hurricanes and floods and what's called slow-onset impacts such as sea level rise, desertification, drought, etc. They need help dealing with that. And the deal in Paris was to set up a program to help countries cope with those now unavoidable impacts. The missing piece so far has been any substantially ramped up finance and capacity-building support for those countries, that will be the issue debated in Madrid, whether there should be an effort to look at innovative sources of finance above and beyond the famous $100 billion pledge the developed countries made a decade ago in Copenhagen for developing country action. Those are the two big negotiating issues. There's some other ones on the table. But looming over it all is this gap that we talked about earlier between the commitments that countries have made under Paris to constrain their emissions, and what's needed to meet the science-based temperature limitation targets. And that will be permeating the conversation; there will be a number of high level ministerial meetings, not just the usual environment ministers that come together at these things, but the Chileans are also convening meetings of science ministers, energy ministers, finance ministers, agriculture ministers, because this is going to take everyone in every sector of the economy pulling together. And they want to stimulate a race to the top and in terms of increasing ambition. So that'll be the sort of subtext of this meeting. And all of this is laying the groundwork for the climate summit next November, just after the US elections that the United Kingdom will be hosting in Glasgow, Scotland, which is the real deadline under Paris for countries to say, Is this your final answer? What you put forward five years ago in Paris and in terms of your level of ambition, or can you do more? That's the real political deadline for countries to decide what to do on the ambition front. So in a sense, this COP in Madrid will just be sort of setting the table for that much deeper, more intense conversation over the course of 2020. 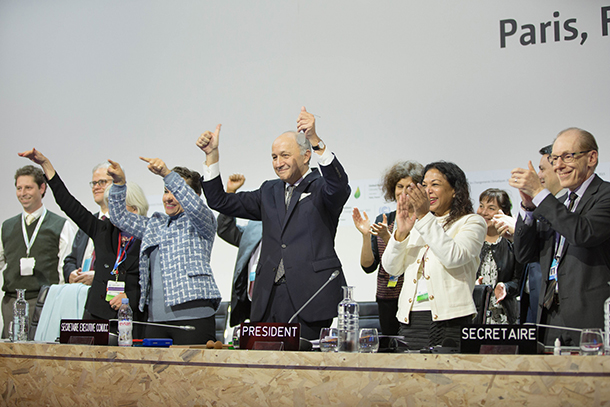 UN climate change leaders shared a moment of joy at the establishment of the landmark international climate agreement in Paris, France, December 12, 2015. Including the U.S., which has begun the yearlong withdrawal process, 194 states and the European Union have signed onto the agreement. (Photo: UNclimatechange, Flickr CC BY 2.0)

CURWOOD: So to what extent is the upcoming meeting providing a reality check to the world about the amount of money that is going to be required to make the kind of transformations that will, you know, keep the planet from becoming relatively uninhabitable?

MEYER: Well, that's definitely part of the conversation. And as you know, huge sums of money are involved here, not only the public sector money, such as the hundred billion dollar commitment that was made, starting in 2020 per year from developed to developing countries, but the much larger trillions of dollars of investment per year that are being made in the private sector. And there's a whole movement called Shifting the Trillions, which says we have to redirect the money that's now going into fossil fuel investments and coal and oil and natural gas infrastructure around the world, redirect that into efficiency, into renewable energy, into nature-based solutions like agriculture and wetlands and forest solutions if we're going to have any hope of getting ahead of this curve. The good news, of course, is that it's much less costly to do that, than to sit by idly and watch climate impacts mount. I think it's coming home to people that the cost of climate inaction is really the threat to well-being and global prosperity, not the cost of climate action.

CURWOOD: And remind us, Alden, of the We're Still In movement in the United States that the governors, leaders of cities, and a number of companies have come together to come to the international meeting to say that, despite the reluctance of the White House to engage, that there are many other jurisdictions in the US that are. 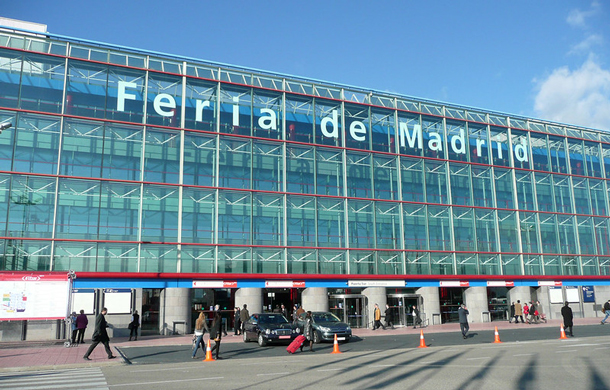 MEYER: Well, this is a movement that was launched in the wake of the elections in 2016, actually had its origins in the Marrakech Climate Summit, which took place during the US elections. And as you said, a number of governors, mayors, business leaders, university presidents, investment leaders and others have come together to say to the world that President Trump does not equal America when it comes to climate change. That there are substantial elements of the US political system, US economy, that are committed to Paris, committed to do our share of reducing emissions. With the election of a number of new governors last November, there are now, I believe, 25 or 26 states in the US climate Alliance, which is the state-based component of We Are Still In. And collectively the states and cities that are in the We Are Still In movement represent about two thirds of the American economy and the American population. So this is a big coalition of folks; they will have a presence in Madrid, there will be a US Climate Action Center, which will feature side events and press briefings, and exhibitions and talks by these leaders from around the United States, trying to show the rest of the world that despite what President Trump is doing, formally starting the withdrawal process from Paris, that most Americans and most sub-national leaders remain committed. And of course they have the public behind their back, because all the public opinion polling shows a very substantial majority, not just of all Americans, but of Republicans as well support the US staying in Paris, support us being a leader on climate. So in a sense, they're just trying to demonstrate that President Trump is an aberration.

CURWOOD: Alden Meyer is Director of Strategy and Policy at the Union of Concerned Scientists. Thanks so much, Alden.

MEYER: I enjoyed being with you, Steve.

Hear Living on Earth’s interview about the COP24 UN climate meeting in Katowice, Poland in December 2018

See the agenda and more for COP25 in Madrid, Spain

About the Union of Concerned Scientists