This holiday week, Peter Dykstra notes that there is hope yet for the highly endangered Vaquita porpoise, whose pups offer the potential for repopulation. He and host Steve Curwood also examine the recent Harvard - Yale football game, where students from both schools banded together in protest to demand that their respective institutions divest their endowments from fossil fuels. Heading further into the world of fossil fuels, Peter Dykstra reflects on the 20th anniversary of the Exxon Mobil merger and the company’s alleged efforts to bury climate science.

CURWOOD: Well, let's take a look beyond the headlines now with Peter Dykstra. Peter's an editor with environmental health news that's EHN.org and DailyClimate.org. Hey, did you have a great Thanksgiving?

DYKSTRA: I sure did Steve, hope you did, too. I want to start with a little good news, possibly good news, at least. Vaquita porpoises are the tiniest marine mammals, they top out at about 110 pounds. They have some of the tiniest habitat, only a portion of the Gulf of California, of Baja California. And they probably also have the tiniest chance for survival. They're largely wiped out as bycatch by gill net fishermen.

DYKSTRA: The good news is despite the fact that the species may be down to as few as 20 animals left, there's been very, very little ability by Mexico to enforce conservation laws. In spite of it all, there are some young ones. There are some viquita porpoise calves have been spotted in the last few years. And they offer what biologists term as slim hope for a species that once was considered to have no hope at all.

CURWOOD: Well, let's hope those vaquitas keep having babies. Huh? What else do you have for us, Peter?

DYKSTRA: We have a final score from New Haven, Yale 50, Harvard 43 climate protest arrests 42. Well, it's been decades since the Yale Harvard football game meant anything among college football elite. But this past weekend, the game often known as The Game, got some game of its own has hundreds of students from both schools non-violently stormed the field at halftime to call for both Yale and Harvard to divest their fossil fuel investments.

CURWOOD: Both of those schools have huge endowments. Harvard has north of $40 billion, I think Yale has $30 billion dollars.

DYKSTRA: The protests delayed the restart of the game, and most importantly, it forced ESPN to mention climate change.

CURWOOD: So I wonder if other schools will consider this?

DYKSTRA: Well, I'll be really impressed when the Oklahoma State football team sees a similar event at the T. Boone Pickens Memorial Stadium, or when a pro game is disrupted at Lucas Oil Field in Indianapolis.

CURWOOD: So yeah and of course T. Boone Pickens is a famous oil man.

DYKSTRA: That's right, and that'll be your Living on Earth sports report for today.

CURWOOD
Okay Peter. Let's have you take a look back in history and tell me what you see.

DYKSTRA: November 30, 1999, it's the 20th anniversary of the Exxon Mobil merger, actually a re-merger. It undid a major part of the breakup of Standard Oil from the work of Teddy Roosevelt and the trustbusters nearly a century before.

CURWOOD: Indeed, taking on monopolies back then. It's a pretty big company now.

DYKSTRA: It's a huge company now. In recent years, Exxon Mobil has been accused of burying its own climate change science and funding climate denier groups, in addition to being one of the biggest contributors to climate change throughout the world. 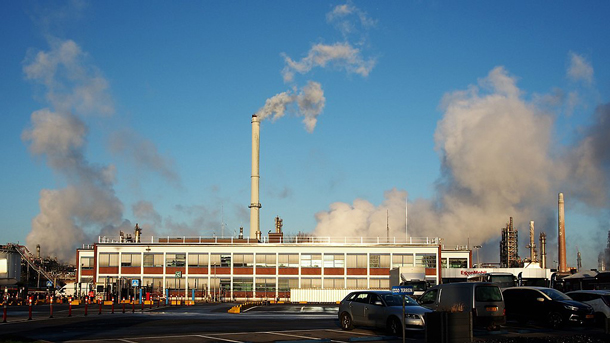 CURWOOD: And there's more on these stories at the Living on Earth website loe.org.


More information about the vaquita and its endangered species status