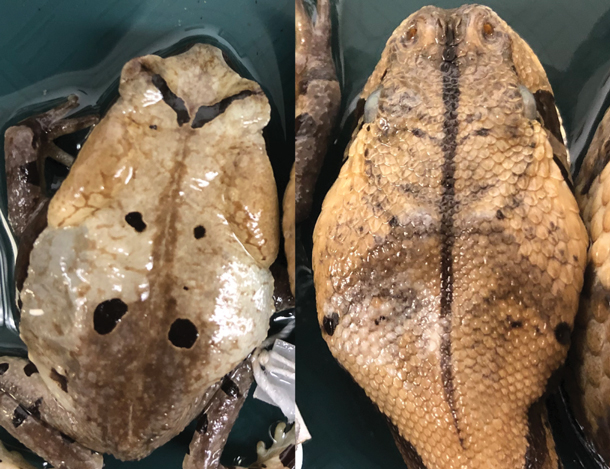 Subadult Comparison: A side-by-side comparison between a subadult Congolese giant toad and a subadult Gaboon viper from above, showing similar color pattern, shape and size. (Photo: courtesy of Eli Greenbaum)

If you want to make it, fake it: researchers have discovered that harmless Giant Congolese Toads (Sclerophyrs channingi) mimic the venomous Gaboon vipers (Bitis gabonica) that share their central African rainforest homes. The toads, which are the first toads known to mimic a snake, use a whole toady toolkit, as Living on Earth’s Don Lyman tells us. Their bodies mimic the heads of vipers, and they raise their hindquarters to mimic a viper’s strike pose, even hissing like a snake if anyone gets too close.

LYMAN: There are well known examples of harmless animals mimicking deadly snakes. Burrowing owls can make a sound like a rattle snake. Benign snakes, like the
scarlet king snake, mimic the color patterns of venomous snakes, like the coral snake. But now researchers have discovered what they believe to be the first known case of a toad species imitating a venomous snake.


A young Gaboon viper (Bitis gabonica) on the rainforest floor in Democratic Republic of the Congo. (Photo: Colin Tilbury, courtesy of Eli Greenbaum)

Scientists analyzed specimens of giant Congolese toads, and Gaboon vipers, Bitis gabonica, and found that the rear end of the toads looked an awful lot like the heads of the Gaboon viper. Both species evolved together 4 to 5 million years ago in the same Congolese rainforest. The toads also appear to have evolved two behaviors that imitate the Gaboon viper. The toads display a color pattern and shape that resembles the cocked head of a Gaboon viper in a strike position. And, when the toads feel threatened, they make a hissing sound similar to the Gaboon viper's hiss. 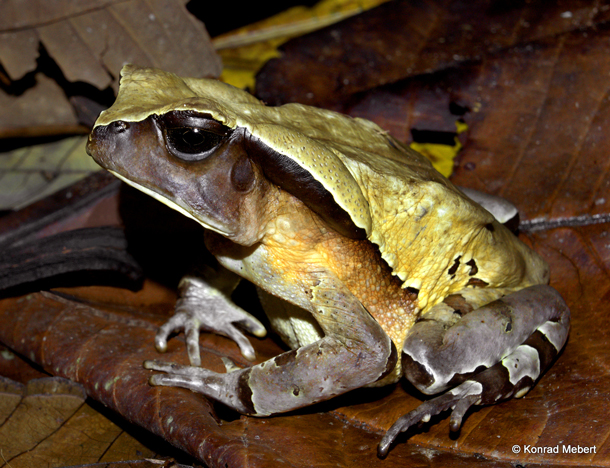 LYMAN: Scientists believe this unusual case of mimicry helps protect toads from being eaten by predators, which might be tricked into thinking a harmless toad the size of a fist is a 6 foot long venomous snake. That’s this week’s note on emerging science. I’m Don Lyman. 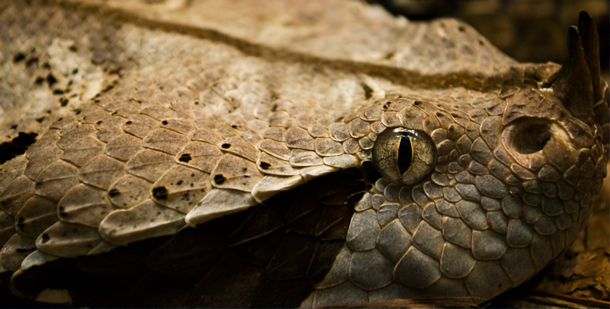 
More about how the mimicry works

Read the original scientific publication in The Journal of Natural History

Click here to watch a deadly Gaboon Viper in action