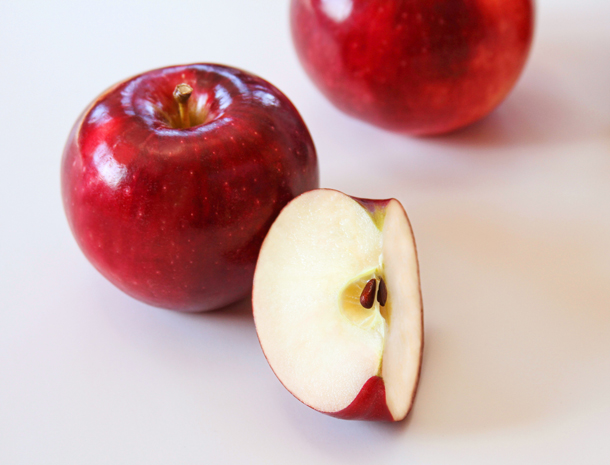 A close-up view of the Cosmic Crisp. (Photo: courtesy of Proprietary Variety Management ©)

A new variety of apples, the Cosmic Crisp, hits grocery stores around the country on December 1st, after more than 20 years of development by the Washington State University Tree Fruit Research Commission. The Cosmic Crisp is a descendant of the popular Honey Crisp apple, and its breeders hope it can complete the holy grail of apple qualities: Great taste, easy growing and harvesting, and a long shelf life. Enrique Pérez de la Rosa of Northwest Public Broadcasting reports on how orchards are taking special care to ensure the first crop hits the shelves as a winner that matches the hype.

CURWOOD: Few things seem as pure and simple as taking a bite out of a fresh fall apple but growing apples is actually somewhat complicated. You can’t just throw some McIntosh seeds in the ground and expect to get a mac. You’ll likely get a hybrid that tastes nothing like the parent fruit. In fact, Johnny Apple Seed was likely sowing seeds for apple cider, not snacks or pie. Today, most apples are grown as a graft onto a root stock. A lot of trial and error goes into creating a new variety of apple but a new apple offering, the cosmic crisp, is getting ready to hit markets soon. Apple growers hope it will be as sweet and crunchy as a honey crisp but have a longer shelf life, making it easier to ship and store. Enrique Perez de La Rosa from Northwest Public Broadcasting has the story.

DE LA ROSA: Ask Aaron Clark how the cosmic Chris harvest is going and how answer with cautious optimism.

CLARK: This certainly I think, has got an opportunity to have some broad based appeal and, and, you know, everybody's pretty excited about it.

DE LA ROSA: That's because he's waiting for the apple to hit grocery stores at the end of the year. Clark is vice president of Price Cold Storage in Yakima and a fourth generation grower. Simply put, Clark is a businessman. Like many growers in the state Price Cold Storage sees a lot of potential in the apple. They've planted about 80 acres of Cosmic Crisp in their orchards compared to the 2000 acres of tree fruit they harvest that may not sound like much, but Clark says that's a lot for a new apple considering it takes upwards of $35,000 to buy and plant new trees.

CLARK: So this orchard you're looking at right here is a we got an easy a million four in it, and we're just getting our first crop.

DE LA ROSA: And that's not even all of it.

So what's so great about Cosmic Crisp? The Washington State University tree fruit research commission has been breeding Cosmic Crisp since 1997. Ines Hanrahan is executive director there, she says compared to its genetic parent Honey Crisp Cosmic Crisp is just a sweet and easier to grow. But though it's easier to grow Hanrahan says, growing new apples is not so simple.

HANRAHAN: Well, it's like any new thing you have to learn how to handle it doesn't mean that you can just plug some piece of wood in the ground that grows by itself you still have to manage it horticulturally.

DE LA ROSA: That's why the research commission spent weeks ahead of harvest teaching growers how Cosmic Crisp matures on the tree. If you take a bite out of cosmic before harvest. That's really good. It tastes it looks like it's right for picking. But Cosmic Crisp matures slowly which means growers have to rely on an iodine solution to see how much starch stored in the apple through photosynthesis has been converted into sugar. They spray the solution and sugars turned dark. Too much sugar or not enough means the apples might not store as well. But Cosmic Crisp can run into more serious challenges if not managed well from the start. Accor ding to WSU researcher Bernardita Sallato the variety is vigorous meaning it can grow quickly in most soil. But that can also mean it can grow too quickly. If not fertilized, properly mismanaged trees can develop something called blind wood.


Legacy Orchard in Washington State, one place where Cosmic Crisp apples are being grown (Photo: courtesy of Proprietary Variety Management ©)

SALLATO: Which is something like what you see here that you have a wood that it doesn't have any buds or a spores with no fruit so that's why they call it blind wood.

DE LA ROSA: So there's just nothing on it.

HANRAHAN: Yeah, but those things those challenges they can be managed.

DE LA ROSA: Sallato says most growers have avoided blind wood because it's cause and remedy are well known. Older apples like Granny Smith and Fujis also suffer from it. However, other issues are harder to manage because they're not as well understood by science. Take green spot, a cosmetic defect that doesn't change the taste of Cosmic Crisp, but could make it harder to sell. Sallato says it's probably just like bitter pit and Honey Crisp caused by a calcium deficiency. But she's not sure yet. She and other WSU researchers are looking into its causes.

SALLATO: If a the management of vigor or nitrogen can have some factor on that, the sprays of calcium with or without, so this many different factors that will be evaluated.

De La Rosa: Back at Price Cold Storage, Aaron Clark says he hasn't seen any of those issues. But experience has taught him that challenges are a natural part of taking an apple from the lab to the orchard.

CLARK: There's a big difference between test blocks and places that Wazoo would do and commercial farming. It's it's a lot of trial and error. It's just planting it and seeing where it goes.

DE LA ROSA: And this December It's going to market after 20 years and development

CURWOOD: That story of the cosmic crisp apple from Enrique Perez de la Rosa comes to us courtesy of Northwest Public Broadcasting.


Northwest Public Broadcasting | “What Does It Take To Get A New Apple Variety To Market? A Lot. And Cosmic Crisp Shows It”