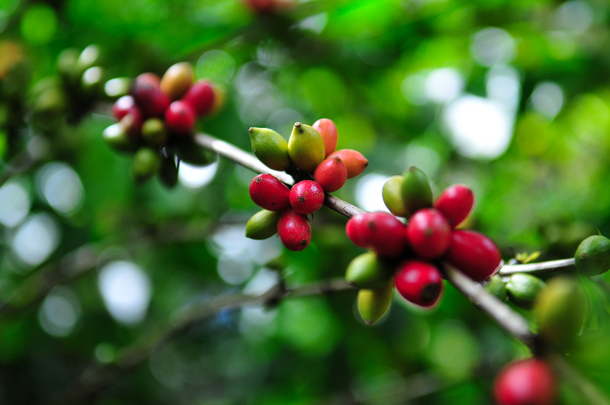 A cup of joe is made by brewing roasted coffee beans, which are really the pits of coffee cherries. (Photo: Neil Palmer, CIET, Flickr CC BY-NC-ND 2.0)

Coffee is no longer simply a generic drink to wake you up as there is now a sizable market for specialty coffees with unique flavors. To link up coffee growers with that market and ensure they get a fair price, a Portland, Oregon-based nonprofit called the Alliance for Coffee Excellence started a coffee tasting “cupping” and auction. Crystal Ligori from Oregon Public Broadcasting reports on how this project, now celebrating its 20th anniversary, has increased the earnings of coffee farmers around the world.

CURWOOD: At the end of your Thanksgiving feast you might have reached for a cup of coffee to go with that pumpkin pie, or poured one to get going as you headed out on the road for the drive back home. It costs around 15 to 20 cents to brew a cup of coffee at home, and coffee shops can charge way more, but the tropical farmers who actually grow the coffee typically get less than a penny for a cup’s worth of beans. But here is a change on the way, at least as far as a Portland, Oregon based non-profit is concerned.
Crystal Ligori from Oregon Public Broadcasting has the story.

LIGORI: At an industrial building in southeast Portland, Steve Kirbach and Brian Freire are tasting coffee.

LIGORI: Kirbach is an 18 year coffee veteran and the director of sourcing and manufacturing at Coava Coffee Roasters. He and lab manager green buyer Freire do these cuppings multiple times a week, sometimes multiple times a day to evaluate their coffees.

LIGORI: How we talk about coffee, how it's evaluated, scored and subsequently priced. It hasn't always been this way. In fact, people only started using the term specialty coffee in the 1970s. That's the underlying idea that much like wine, specific microclimates and coffee varietals produce different flavor profiles of coffee. Think the difference between a red delicious apple and a honeycrisp. You probably drink coffee without thinking much about where it starts. So you may not know that that coffee bean isn't actually a been at all.

SPINDLER: I think most people don't realize that coffee comes from a cherry. A lot of times the look on their faces is... What?

LIGORI: That's Suzy Spindler. She's an icon in the specialty coffee industry, who in the late 80s answered an ad in a Chicago newspaper with a pretty catchy opening line.

SPINDLER: Do you love coffee?

LIGORI: Spindler ended up working for the international coffee organization and in 1997, was tapped to be part of the gourmet coffee project. It was an effort by a group of trade organizations to study transparency in the supply chain in five countries, Uganda, Bolivia, Ethiopia, Papua New Guinea and Brazil. The idea was to get growers more money for producing better quality coffee, and in turn reduce the economic vulnerability for those coffee growing countries. Historically, coffee exported from a region was lumped together sometimes literally, without much thought on the type of coffee or how it was grown or produced. So Spindler and a colleague were tasked with finding out if Brazil, the world's largest coffee producing country, could grow that higher quality coffee. And it could, but changing the minds of people like importers and roasters wasn't easy. 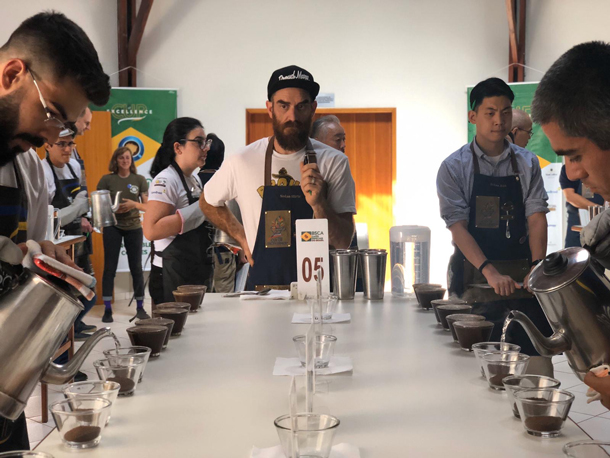 SPINDLER: We couldn't convince anybody that it was not just a fluke, it wasn't going to happen.

LIGORI: So they thought having a coffee competition in Brazil can be the answer. They’d bring judges into taste the coffees, rank them and award the best. But that idea quickly shifted.

LIGORI: Instead, they turn to the internet. This was 1999, just a few years after eBay started and was becoming a recognizable concept. They decided to build their own auction platform. They pick 10 coffees to auction off to the highest bidder.

SPINDLER: The rest is kind of history, I guess. I think the number one copy was certainly less than $3 a pound. And it just I mean, it went, Oh my gosh, oh my gosh.

LIGORI: That winning coffee sold for $2 and 60 cents a pound more than double the commodity market price for coffee. Here's why that's important. Coffee is sold on commodities markets around the world just like wheat, cotton, sugar and plenty of other agricultural products. But the system is flawed when it comes to coffee. For example, today's current commodities market rate for coffee was 96 cents a pound. But on average, it costs around $1 40 a pound to produce. o cup of excellence auctions help Connect growers with buyers who actually cared about and would pay more for higher quality coffee. That first auction started to change the whole mindset around where specialty coffee could come from. So with the help of the Brazil specialty coffee association, another auction was held, this time being called Best of Brazil. 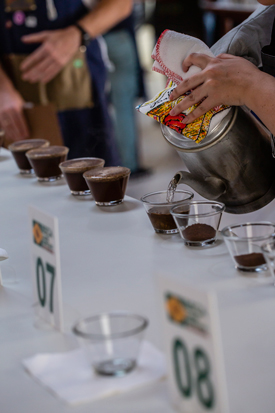 SPINDLER: And I'll never forget this day, sitting in the cupping room with the discussion and hearing one of the cuppers go, "what country are we in? Brazil doesn't produce this kind of coffee."

LIGORI: Spindler ended up co-founding the Alliance for Coffee Excellence to oversee the cup of Excellence Program. They've held over 140 auctions in more than a dozen countries. And this month, they celebrate their 20th anniversary.

Back in the cupping lab, the guys at Coava are evaluating everything from acidity to mouthfeel on a cupping form that looks a lot like a math worksheet. There's a specific process to cupping from how coarsely ground the beans are to the temperature of the water to that aeration or slurp of the brew. From a cafe in Oregon to a farm in Ethiopia, it's something that can be replicated anywhere. And it needs to be because it's how coffee across the world is evaluated now, by third wave coffee companies like Stumptown or Intelligentsia, to small micro roasters in Europe to the biggies like Starbucks or Pete's. Here's Kirbach again,

KIRBACH: Specialty coffee is from eighty and above. But there's a huge discrepancy between 80 and 86. Even within the smaller range of like 84 and above there are very distinct price tiers typically.

LIGORI: Coffees in a Cup of Excellence auctions must score 87 or higher. This past summer Kirbach was a head judge for a Yemen auction and the competitions are fierce. Before the auction even begins, judges evaluate up to 9000 samples with the top coffees tasted more than 100 times. But this world of specialty coffee can often feel disconnected from your everyday drinker.

KIRBACH: Somewhere down the line. It was established that $1 cup of coffee is okay. And that probably should have never happened. You know what I mean? Like that only happened because somebody was getting exploited.


The Cup of Excellence auction is a selective event in which 9,000 coffees can compete but only 30 can pass. (Photo: PhotoTony Chen, Alliance for Coffee Excellence)

LIGORI: The Alliance for Coffee Excellent showed coffee farmers that extra work was worth it. From being selective about picking only the ripest cherries to using different methods to process the coffee beans. In the end, people would pay more for better quality coffee. Here's Susie Spindler again.

LIGORI: And after two decades the cup of excellence auctions have brought in more than $60 million for farmers.


OPB | “How a Portland Nonprofit Brings Better Coffee to Your Cup”