Misfit Produce at Your Doorstep 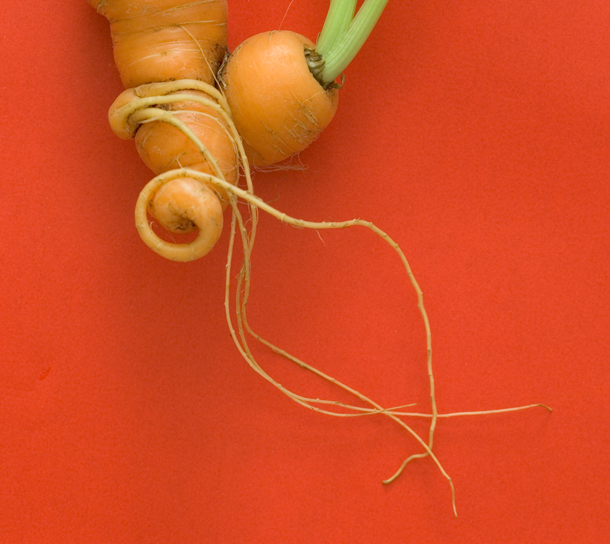 Much of US food is wasted because of aesthetic imperfections, like with this twisty carrot. (Photo: Brett Forsyth, Flickr, CC BY 2.0)

The new paradigm of social distancing and staying at home is whetting consumers’ appetite for grocery delivery. And several companies that will deliver straight to your doorstep aim not only for convenience but for reducing food waste as well, by sourcing produce that isn’t uniform enough for supermarket shelves, but is still perfectly edible. Living on Earth’s Bobby Bascomb talks with Abhi Ramesh, CEO of Misfits Market, about how it works.

CURWOOD: To slow the spread of the coronavirus many people are limiting travel outside the home to essential tasks like getting medical care and going to the grocery store. And there are ways to get fresh food delivered. Several companies including Hungry Harvest, Imperfect Produce, and Misfits Market work with farmers to collect produce that isn’t quite good enough for supermarket shelves but is still perfectly edible. They’ll pack them up and deliver weekly straight to your door. Abi Ramesh is the CEO and Founder of Misfits Market, and he spoke with Living on Earth’s Bobby Bascomb.

BASCOMB: So what does Misfits Market do? Can you please explain your business model to us?

RAMESH: Absolutely. So the simplest way of describing it is, we essentially rescue a lot of different types of products that would otherwise go to waste in our food system. And we ship it directly to households. And the idea is that you can save money, and also help combat the global food waste problem, by buying food from Misfits Market.

BASCOMB: And what kind of farms do you work with to get your produce?

RAMESH: Yeah, so we make it a priority of ours to work with non-commercial farms. And so we work with a pretty large variety of small, medium-sized, and some that are even larger farms, but they do not sort of like big, big agricultural, commercial farms. And we work with them to sort of determining the product that they otherwise wouldn't be able to sell, or a lot of times product that would be going to waste on the fields, going to waste in transit and storage. And we figure out what is consumable for human consumption and we repurpose it and ship it directly to people.

BASCOMB: And why would it otherwise be going to waste?

RAMESH: Yeah, so there's a lot of different reasons why, you know, food can go to waste in our food system. We generally think about it and bucket it into a sort of three big buckets. The first one is an aesthetic reason. So there's a lot of produce, that simply wouldn't look great if it were sitting on grocery store and supermarket shelves. And so a lot of the large supermarket and grocery store chains won't actually go and purchase, you know, certain types of produce from growers, if it just looks off, right, if it's an apple that's not perfectly spherical if it's butternut squash that's shaped a little bit weird. If it's a cucumber that's too curved. So things that just have aesthetic imperfections, scarring falls in this category as well. That's one big bucket. The second big bucket is size constraints. So we'll have products that are either too small or too large to sort of fit into the size restrictions that regular buyers would want. So we see some of that. And the third bucket, which I think a lot of people don't necessarily think about, is simply excess. So you know, nature operates in interesting ways and isn't necessarily always predictable. And buying patterns from large supermarkets and grocery chains are also not super, super in line with what growers are producing. So the food system produces a lot of excesses accidentally, and we're able to purchase that and sell it to our subscribers at a big discount.

BASCOMB: And where would these imperfect and excess fruit and vegetables go if not for services like yours?

RAMESH: So today, there's not really--the short answer is there's not really an outlet for them. So if a grower is not able to sell stuff, they'll either toss it or they'll end up leaving it in the ground. So we, a lot of times we'll see farms that choose not to harvest something that they've grown just because they think there's not a market for it. And so all of the time, energy, and actual sort of resources that have gone into growing that product go to waste because they get tossed. Sometimes we'll see that something is in transit, it goes to the wrong place, there's no place to store it so it gets dumped at a dumping or composting facility. So usually this stuff gets thrown out today.

BASCOMB: I mean, surely it could end up in a food pantry or something like that, though?

RAMESH: It's a good question. And I wish a larger chunk of it already did, the way the system works today. But unfortunately, if you look at the spectrum and the scale of all the farms and growers out there today, there's a very, very, very small number of them that actually have the infrastructure today to go and ship items consistently to food banks and food pantries. There's a very small number of food banks and food pantries that have the infrastructure to even go pick up stuff if they had to do that. So the answer is that a very small percentage of food waste would go to food pantries, and that's food waste that you know, we're not touching today. But the vast majority of it, it doesn't because that infrastructure doesn't exist. So we actually, at Misfits Market, we sort of see ourselves as building that kind of piping and that infrastructure where it didn't exist already. So we're aggregating food from a lot of different growers. We sell what we can to folks that want to save food, want to eat more affordably. And then we actually donate a pretty large chunk of it to food banks and food pantries.

BASCOMB: And I imagine, too, for the farmers, I mean, they have to pay somebody to go out and pick the beans and pick the squash. That's also expensive. 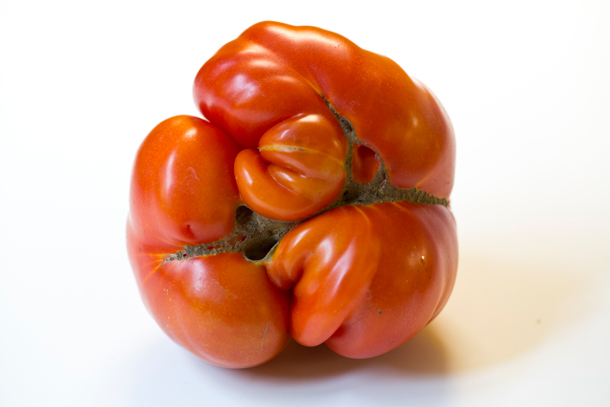 Not all tomatoes are beautiful. But even the ugly ones may be perfectly edible! (Photo: Silke Baron, Flickr, CC BY 2.0)

RAMESH: Exactly. Right. So because you know, for example, we work with a farmer that grows eggplant, and a lot of, like, the eggplant that's too small to actually sell to grocery stores, he leaves in the field. And if we said hey, can you just donate that, you know, for free? His answer would be, I guess I could, but someone, you know, someone has to sort of cover the cost of labor, cover the cost of transportation, of storage, for me to actually go do that. And so what we're saying is, hey, we'll do that. And so it's a win for you, and we'll actually pay you a little bit more than that, actually a lot more than that, so you make money on it. This is income that that farmer would not have had before. And so not only are they covering the cost of taking the produce, of storing the produce, of shipping the produce, they're also making money on food that they've grown and they're not harvesting otherwise.

BASCOMB: Now, how do you know that the produce in a Misfits Market box would actually have gone to waste? I mean, an ugly carrot, for example, can still be shredded, or a bruised tomato can be made into sauce or something, right?

RAMESH: Yeah. So you know, in theory, in a perfect world, in a very efficient system, you know, every farm that grows carrots, or every farm that grows tomatoes, also has an avenue for shredding carrots or canning tomatoes, or creating, you know, for apple growers, they have a way to create cider. But again, it's one of those things where the food system is quite inefficient as it is today to the point where, for every one grower that has access to, you know, a carrot shredder, there are twenty other carrot growers that do not today,

BASCOMB: Looking down the road, what do you see for the future of Misfits Market and this idea of avoiding food waste more generally?

RAMESH: Our goal over the next couple of years is to really grow Misfits Market to be a national brand that sort of embodies a lot of things we want to embody around the affordability of food and sustainability and food waste. And my hope is that, as we do so and as we grow, we can involve more people in the food system, and really sort of push the envelope a little bit more when it comes to food waste. And also in the process, educate households and consumers on what they can do on their end to sort of tackle that food waste problem. And so our goal is to provide consumers with little tidbits that they can take and use on a daily basis so that at scale, we're able to kind of make a much larger impact.

BASCOMB: And can you give me one or two of those tidbits? Maybe somebody's not quite ready to sign up for weekly delivery, but what can they do in the interim?

RAMESH: Yeah, yeah. And our blog is a really good place for this. So we're putting out a post about how you can pickle and jar certain things in a very easy manner in your home, and it allows for a lot of things to last longer. We're teaching folks how they can, you know, use every single part of a piece of fruit and vegetable instead of throwing it away. And there's really fun things like you can even, you can use orange peels and grapefruit peels in your cocktails, you can create broth using pieces of fruits and vegetables that you probably wouldn't have used and could have tossed. So I think all of those are little examples. We're hoping we can add those and create a really big blog out of them.


The New Republic | “Does Your Box of “Ugly” Produce Really Help the Planet? Or Hurt it?”

Food & Wine | “Why the Business of Ugly Produce Is So Complicated”