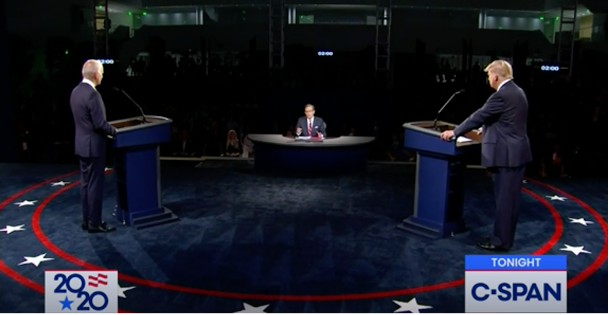 Environmental Health News Weekend Editor Peter Dykstra joins Host Steve Curwood to review the September 29th presidential debate where amid the chaos, a question on climate was asked for the first time in a general election debate since 2008. The two discuss the responses from President Trump and former Vice President Biden and celebrate the 50th anniversary of the creation of two vital environmental agencies: the EPA and NOAA.

CURWOOD: It's Living on Earth. I'm Steve Curwood. Time now to talk to Peter Dykstra. He's on the line from Atlanta, Georgia, and he's an editor with Environmental Health News, that's EHN.org and Daily.Climate.org. And, Peter, how you doing? And let's talk about that debate between Vice President Biden and President Trump the other day.

DYKSTRA: Well, yeah, about 100 million people tuned in, including myself. And I kind of thought I was wasting my time, listening for a full hour to interruptions and crosstalk largely from the president, but certainly from both men. And about an hour in, the moderator Chris Wallace of Fox News, not only asked a question that the debaters answered, but he asked a question about climate change.

CURWOOD: Been a while since we've heard that in presidential debates.

DYKSTRA: 12 years to be exact, three campaigns ago, with the late Senator John McCain, and then-Senator Barack Obama running against each other. Since then, not a word in the final presidential debates about climate. And all of a sudden, out of the blue, a moderator asks a reasonable question about climate.

CURWOOD: Let's take a listen, now, first to Chris Wallace's question to the President. He tied climate with the fires in California.

WALLACE: Do you believe that human pollution, gas, greenhouse gas emissions contributes to the global warming of this planet?

CURWOOD: And then the moderator turn to former Vice President, Joe Biden,

WALLACE: You propose $2 trillion in green jobs, you talk about new limits on fracking, ending the use of fossil fuels to generate electricity by 2035. And zero net emission of greenhouse gases by 2050. The President says a lot of these things would tank the economy and cost millions of jobs.

BIDEN: He's absolutely wrong, number one. Number two, if in fact, when during our administration, the Recovery Act, I was able to, I was in charge, able to bring down the cost of renewable energy to cheaper than or as cheap as coal and gas and oil. 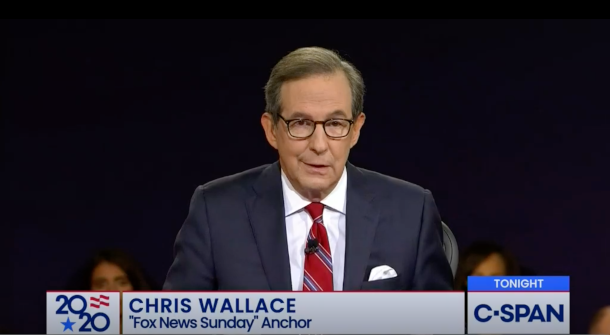 Fox News anchor and Moderator Chris Wallace surprised participants by asking a question about climate change, which was not on the list of circulated topics and which had not been asked on the debate stage for the major Presidential nominees since 2008. (Photo: Courtesy of C-SPAN)

DYKSTRA: Oh, no, particularly the president is not a guy who's known for doing his homework on things. And this topic, climate and the environment was not one that was listed on Chris Wallace's chosen topics for the first debate. We weren't sure if they were going to be mentioned at all, in any of the three scheduled debates, but certainly not this one.

CURWOOD: So let's talk about the actual answers that these two candidates gave. What did you make of Mr. Trump's response?

DYKSTRA: Well, the President gave a number that was way out in space of $100 trillion.

DYKSTRA: I immediately harkened back to Dr. Evil in Austin Powers 3, with similar numbers about a ransom money to not destroy the Earth.

CURWOOD: Wait, that's exactly the line that the President used.

DYKSTRA: That's what the president used. And he was talking about a Democratic Party plan, one that Joe Biden, to begin with, was nowhere near endorsing in the first place. Talking about the Green New Deal put forward by progressives in the House and Senate on the Democratic side.

CURWOOD: Now, how did you rate what former Vice President Biden said?

DYKSTRA: He first of all, cast some distance between the Green New Deal plan and his own, which would be a lot less costly, and according to Biden, would generate jobs and generate new portions of our economy that would more than make up for the cost, in addition to making a great impact on the US impact of climate change.

CURWOOD: What did you make of Biden, not really criticizing President Trump on the climate and especially some of his appointees related to climate protection? 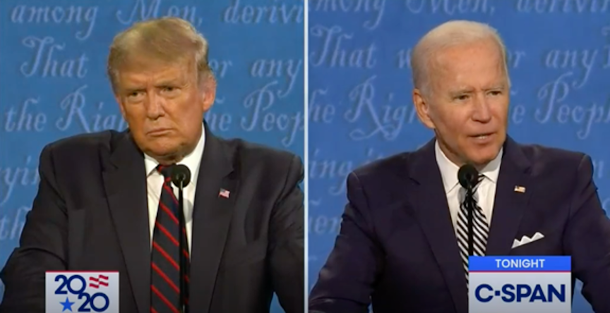 President Trump queried Vice President Biden about The Green New Deal put forth by the progressive wing of the Democratic party, but not endorsed by Joe Biden. (Photo: Courtesy of C-SPAN)

DYKSTRA: Well, there were things within the Biden plan that don't meet some of the farther reaching things on the progressive hands of the party. But they go way beyond the nearly nothing that's been proposed on the Republican side, from President Trump and others, including his heads of EPA, and the Interior Department, who are former lobbyists, respectively, for the coal industry, and the oil industry, something that if he were better prepared, Joe Biden would have made some hay by pointing out.

CURWOOD: Peter, I came away wondering if somebody wasn't paying a lot of attention to climate change, and they were among the hundred million or so Americans that perhaps tuned in to this, that they didn't really get much of an education about climate in this discussion.

DYKSTRA: No, it's still not an issue that is in vogue, not among the Washington Press Corps. One that doesn't seem to have sunk in with either political party, which to me is a shame because not only is it a vital issue, but it's one where you can find the greatest disparity between what the republicans are looking for and what the democrats say they're looking for.

CURWOOD: Well, thanks, Peter. Usually, you know, we take a moment to look back in history. What would you like to point out today?

DYKSTRA: Yeah, two very significant things that happened a day apart. 50 years ago, on October 2nd, the Environmental Protection Agency came into being and a day later on October 3 1970, NOAA, the National Oceanic and Atmospheric Administration came into being. The two agencies that have arguably the most substantial impact on our earth, our climate, and our oceans.

DYKSTRA: All right, Steve, and happy anniversary to EPA and NOAA.

CURWOOD: And there's more on these stories at the living on earth website, LOE.org.


Watch the First Presidential Debate of 2020