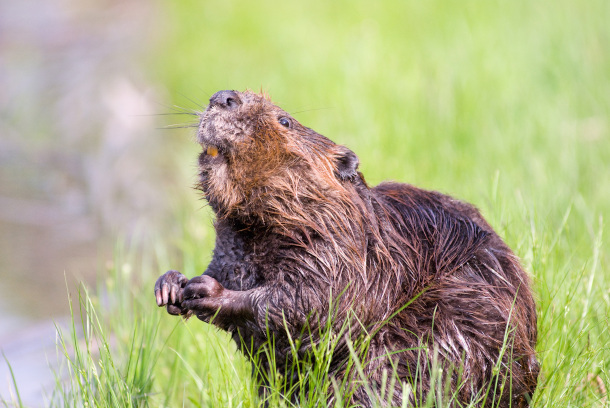 UK officials have confirmed that a five-year beaver reintroduction pilot program in England was a success, and the first beavers to live in England for centuries will be allowed to stay. Professor Richard Brazier of the University of Exeter joins Living on Earth’s Jenni Doering to discuss how the beavers are bringing rich biodiversity back to their local riverscape.

CURWOOD: The Eurasian beaver is native to the British Isles but was hunted to extinction some 400 years ago. But not long ago a beaver family mysteriously turned up on a river in Devon, England, prompting concerns about disease and flooding from beaver dams. Some scientists were able to persuade the UK government to allow the beavers to stay as part of a reintroduction pilot plan and recently confirmed that it’s working. Professor Richard Brazier is a hydrologist at the University of Exeter and spoke with Living on Earth’s Jenni Doering.

DOERING: So it sounds like these beavers are here to stay. What made this trial a success?

BRAZIER: Yes, that's correct. The government has allowed the animals to remain not just remain actually but also to expand. We learn a multitude of different things in this really intensively farmed lowland catchment setting, we learned that the beaver dams could reduce the impact of flooding downstream, we learned that the dams could filter pollutants out of the water. We learned, of course, that the animals in bringing water and creating wetlands to these otherwise dry and drained landscapes that they bring more life so that they bring biodiversity back. So there's a whole range of key findings, which, on balance, certainly demonstrate that the benefits of having beavers back in this landscape far outweigh the costs associated with managing them.

DOERING: Right. I mean, I know that beavers have been gone from England for almost or more than 500 years. So I'm wondering, what do you think the landscape has lost in all of those centuries of no beavers on rivers? 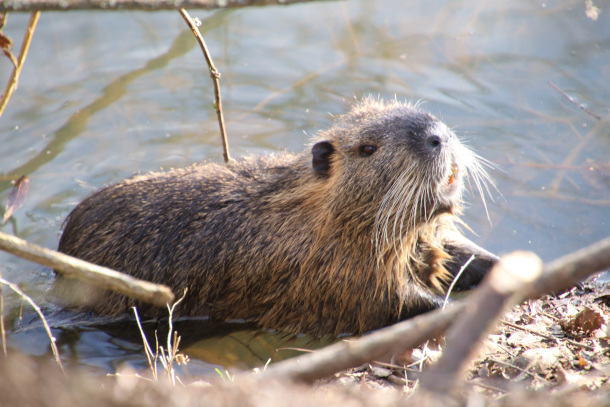 BRAZIER: Well, it's lost a very efficient water resource manager in the beaver. And therefore, it's lost a lot of water. And in fact, for the last few months, we have pretty dry weather conditions at this time of year. And during those times a lot of our small streams and tributaries, agricultural ditches, they just run dry. There's very little water left in the soil. There's very little water recharging our groundwater aquifers, there's very low base flow in our streams and rivers. And of course, when you lose that water, you tend to lose all the aquatic life all the aquatic ecology that depends upon it. So in bringing the beavers back, and now there's 15 colonies, 15 family groups of these animals in the River Otter, we're seeing water coming back into what were wetlands these low, low valley floodplains. And it's an amazing thing to see because the landscape transforms even in just a few years into a wetland, wildlife rich water resourceful landscape again.

DOERING: Wow. So what is the river or the streams themselves? What do they look like once beavers move in and start building their dams? How do they change?

BRAZIER: Well, yeah, they look very different. I mean, we tend to, in fact, for hundreds of years, we've we've straightened our streams and rivers, we've deepened them, we've even dredged them. And you know, we've done so to accelerate the drainage of water off our farmland when the beavers come back here. And of course, they they're well known for building dams. And so they start to push the water sideways back onto floodplains, they start to put meanders back into streams and rivers, they start to coppice the trees like willow, sallow hazel. And so we get abundant vegetation flourishing again. They bring big trees down and open up the gaps in the canopy so that we've then got more light coming down to the understory, the plants that grow near ground level. And what they bring, therefore, is variability instead of straight over deep and narrow channels. We get a whole range of different channel shapes, and all the associated return of vegetation with that variability. So yeah, that's something we as humans managed out of the landscape, refining the beavers bring it back very quickly. 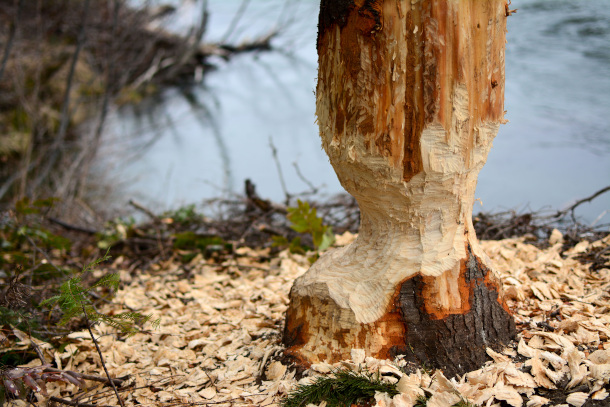 A tree gnawed by a beaver. (Photo: martinvickery, Pixabay)

BRAZIER: Unfortunately, most of the lowland streams and rivers in England, they hold a fine drape a fine layer of sediment above the bed of the stream, which is soil that's left on agricultural fields. When the beavers build dams, they capture that soil. And so immediately downstream for 10s of meters, you see these beautiful clean gravels. And water flowing through those gravels is well oxygenated because it's not full of fine sediment. Those clean gravels are so critical as spawning grounds for salmon and sea trout, and yet, they're largely absent in many of our streams and rivers.

DOERING: Hmm, it sounds just beautiful, and maybe a great place to swim. I don't know when a hot day.

BRAZIER: Oh, for sure. In fact, funnily enough, the first time I came across beavers was actually in southern Arizona, down near to Nogales in the San Pedro River. And I went swimming in beaver ponds, because that was pretty much the only place on that San Pedro river in the hot summer that held any water. So that's 20 years ago. Now that's maybe another story, but it just shows you that's a semi arid desert, of course, the Sonoran Desert. And when you get beavers, even in places like that they hold water which yeah, you can use for bathing for sure.

DOERING: And why might beavers be important from an environmental health perspective? 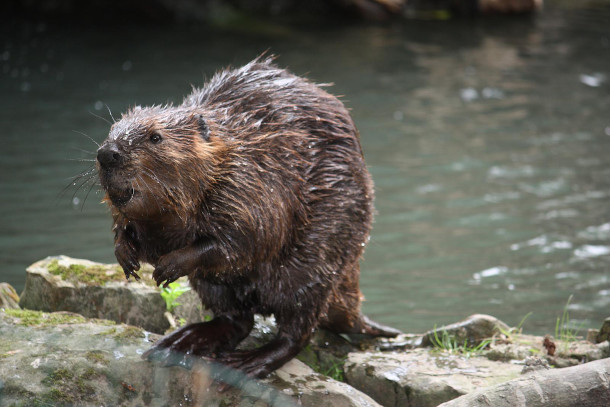 According to Brazier, it only takes a few years for beavers to transform an ecosystem. (Photo: Bryn Davies, Flickr, CC BY-NC-ND 2.0)

BRAZIER: Well, the quality of our water is pretty fundamental to life. I mean, most rivers in the UK waters is obstructed from them for drinking water purposes. We then spent a lot of money treating that water to get it into a pot our state and you know, therefore, if beaver dams in particular can purify the water from a human health point of view, it's in better condition for drinking, it still needs to be treated, of course, but it can be less costly to treat that water if it's cleaner.

DOERING: So before we go, can you share your favorite fun fact about beavers?

BRAZIER: Favorite fun fact. That's a good one. Probably the way in which the female the adult female treats the kids the beaver young, like children is is an amazing thing to see. Her hands if you see up close, they manipulate these young sticks and shoots for the young beavers just like humans, they basically get treated like a little gang of unruly children, much like my own children, I should say, running around, bouncing off each other being shepherded around by the mother. They really are like a little family. And so yeah, I guess that's a neat thing to see.

CURWOOD: Professor Richard Brazier, a hydrologist at the University of Exeter, speaking with Living on Earth’s Jenni Doering.

Chelsea Green published Bringing Back the Beaver by Derek Glow this week. The book details the movement to rewild Britain with Beavers