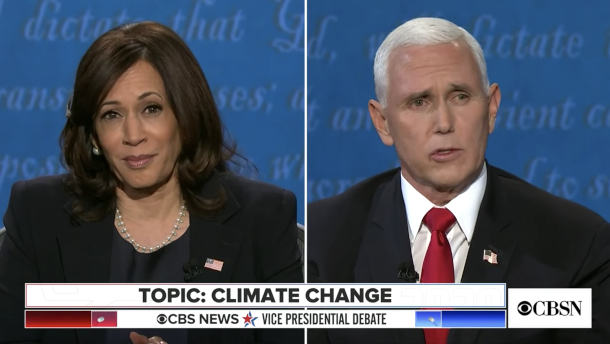 At the one and only Vice Presidential debate of the 2020 election, Republican Vice President Mike Pence and Senator Kamala Harris (D-CA) clashed over fracking, the Green New Deal, and whether climate change poses an existential threat to humanity. Hosts Steve Curwood and Bobby Bascomb put the statements of the vice presidential candidates on climate into context.

CURWOOD: So, Bobby, I know we both watched the vice presidential debate and once again the moderator actually asked the candidates a question about climate change!

PENCE: Now with regard to climate change, the climate is changing, but the issue is what’s the cause and what do we do about it? President Trump has made it clear that we’re going to continue to listen to the science. Now Joe Biden and Kamala Harris would put us back in the Paris Climate Accord. They’d impose the Green New Deal, which would crush American energy, would increase the energy costs of American families in their homes, and literally would crush American jobs. 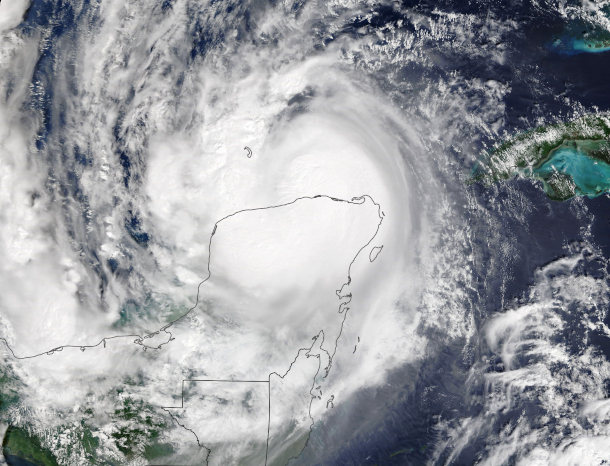 CURWOOD Senator Harris could not agree, and pointed to the Trump EPA website.

HARRIS: Do you know, this administration took the word science off the website, and then took the phrase climate change off the website? We have seen a pattern with this administration, which is they don’t believe in science. And Joe’s plan is about saying we’re going to deal with it, but we’re also going to create jobs. Donald Trump, when asked about the wildfires in California, and the question was, the science is telling us this… You know what Donald Trump said? Science doesn’t know.

BASCOMB: Vice President Pence defended the administration on the environment.

PENCE: I'm very proud of our record on the environment and on conservation. According to all of the best estimates, our, our air and land are cleaner than any time ever recorded. And our water is among the cleanest in the world.

CURWOOD: To say that this administration is committed to the environment just doesn’t ring true based on their actions of the last 3 and a half years. 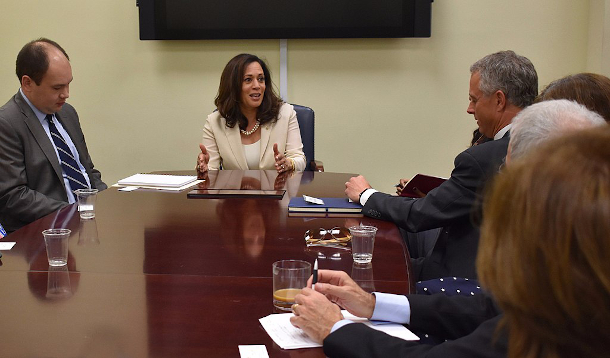 Senator Kamala Harris at a meeting with the League of Conservation Voters, the organization that rates members of Congress on how pro-environment they vote. Senator Harris has an LCV Lifetime Score of 91%, compared to Vice President Pence at just 4%. (Photo: United States Senate – Office of Senator Kamala Harris, Public Domain)

BASCOMB: Absolutely, the Trump Administration has rolled back or is in the process of rolling back roughly 100 environmental regulations in its tenure, many of which protect the very air and water they claim to be so concerned about.

CURWOOD: Exactly, and after equivocating about what’s causing climate change Vice President Pence did then turn to what he sees as this administration’s success when it comes to reducing dangerous carbon emissions.

PENCE: You know what's remarkable is the United States has reduced CO2 more than the countries that are still in the Paris Climate Accord, but we've done it through innovation and we’ve done it through natural gas and fracking.

BASCOMB: Yeah, that’s also not true. I mean US emissions are down about 10 percent over the last 10 years but more than a dozen other countries still in the Paris agreement have reduced their emissions on the order of 20 percent. And we should note, most of the emissions reductions we have achieved in the US are a result of the economic downturn and the collapse of coal, despite the President Trump’s pledge to save the coal industry.

CURWOOD: Right, and as I understand it carbon emissions are set to rise again in the U.S. mostly due to those environmental roll backs you mentioned earlier.

CURWOOD: Well, later in that same question Vice President Pence said that fracking for natural gas is partly how the US has reduced emissions and suggested that Joe Biden and Kamala Harris would ban fracking. Here’s Senator Harris.

BASCOMB: Now Steve, you talked to Former Secretary of State John Kerry recently about Joe Biden’s environmental plan and his stance on fracking. What is their position exactly? 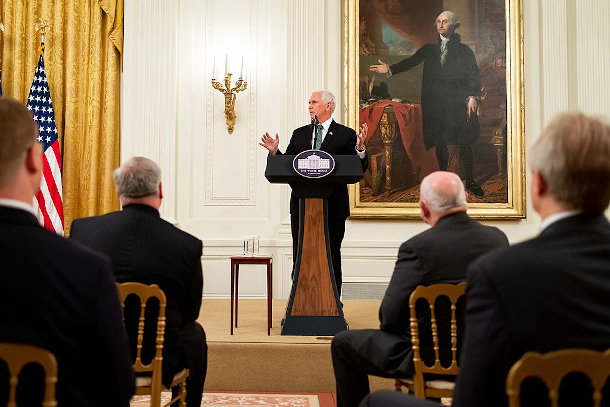 Vice President Pence delivers remarks prior to President Donald Trump’s signing of The Great American Outdoors Act on August 4, 2020, a bipartisan law that Pence touted during the debate as evidence of action the Trump administration has taken to protect the environment. (Photo: D. Myles Cullen, Official White House Photo)

Learn about the link between hurricanes and climate change