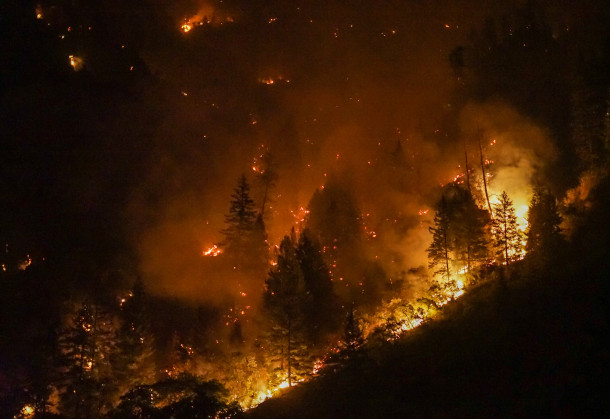 I-70 is a transportation lifeline linking East to West and an engineering marvel as it barrels through the Rocky Mountains. Earlier this summer I-70 was closed for two weeks following the Grizzly Creek Fire in Glenwood Canyon. As Colorado Public Radio’s Dan Boyce reports, it’s just one example of the transportation challenges linked to climate disruption.

CURWOOD: We stay in the Rocky Mountain west now. I 70 is the only major interstate highway that runs over the continental divide in Colorado. And earlier this summer it was closed for two weeks following the Grizzly Creek Fire in Glenwood Canyon. As Colorado Public Radio’s Dan Boyce reports, it’s just one example of the transportation challenges linked to climate disruption.

NIESLANIK: Prior to the canyon flows, it was the best five weeks we ever had.

BOYCE: He owns an Indian restaurant called ‘Masala and Curry’ in the Colorado mountain town of Glenwood Springs. Tourists were pouring over the continental divide from the densely populated Denver Metro area, looking for that COVID summer staycation. And they were using this area's biggest --really it's only -- major transportation artery, interstate 70.

NIESLANIK: And then, when the interstate closed, it was like none. 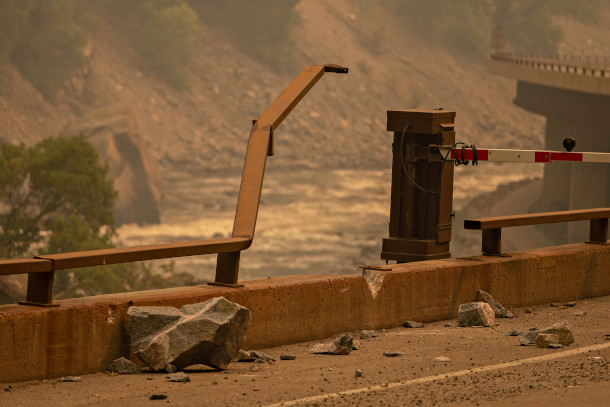 Many of California’s roads had to stay closed due not only to the fire, but to excessive traffic accidents. (Photo: White River National Forest / U.S. Forest Service, Wikimedia Commons, Public Domain)

BOYCE: It was the Grizzly Creek wildfire burning through nearby Glenwood Canyon. The canyon is so steep, so narrow, that it can't even accommodate for interstate lanes. Instead, a massive bridge deck built into the cliff side carries the westbound lanes above the eastbound lanes for miles, all while the Colorado River rushes on down below. Paul Chinowsky teaches environmental design at the University of Colorado. He says the corridor already has its share of dangers.

CHINOWSKY: These great cliffs, thiet grades -- these are perfect areas where we could have risk from roads being closed due to boulders coming down.

BOYCE: Or landslides or flash floods or avalanches -- all kinds of stuff. All right, fine, but we got to get across the mountains, right? Janoski says trouble is hen these roads were built, engineers were using their perception of the local environment at the time to judge risk factors.

CHINOWSKY: The issue with climate change is all of these factors are changing.

BOYCE: Chinowsky helped author the transportation chapter of the most recent national climate assessment. It says “increased drought and heat, coastal flooding and more heavy rain events. All of it will decrease the reliability of the nation's travel infrastructure and increase the cost to maintain it.”

The Grizzly Creek Fire closed interstate-70 for two weeks back in August. Even still, there's a section of Glenwood Canyon reduced to one lane of traffic each way. The canyon walls consist of these striking horizontal layers of crumbling rock hundreds of feet high, layers normally covered in greenery. Now, what you notice is so much of it is black and charred. 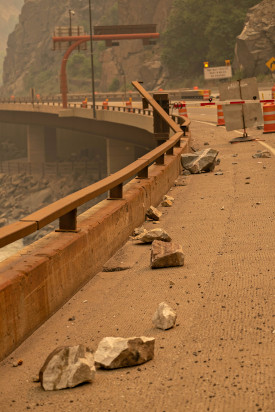 LEW: You can see right behind you that the fire came right up to the road.

BOYCE: That's Colorado Department of Transportation director Shoshona Lew on a recent tour of the canyon for state officials. With the stabilizing vegetation now gone from the cliff sides, this stretch will see problems for years. More rock slides, avalanches, and closures from future rain and snow storms, storms that climate change make harder to predict. Lou says her department does have a team of geohazard experts.

LEW: They know what to look for when a rock could be vulnerable and they know how to identify when we need to take rocks down in order to avoid the falling into the road.

BOYCE: Meanwhile, the U.S Geological Survey is placing monitoring devices through the stretch to help landslide prediction models and the U.S Forest Service is looking into the potential for revegetation.

FULTON: A lot of the time we look at I-70 as almost our own little neighborhood street sometimes.

BOYCE: Of course it isn't, though.

FULTON: Businesses and consumers throughout the country get affected when there's any significant closure of this highway.

BOYCE: You see there just aren't that many reliable ways for a semi-truck to get over the Rocky Mountains. Fulton says the Colorado options besides I-70..

FULTON: They’re twisting and we don't have as much in the way of passing lanes. Nor is there any truck parking there. 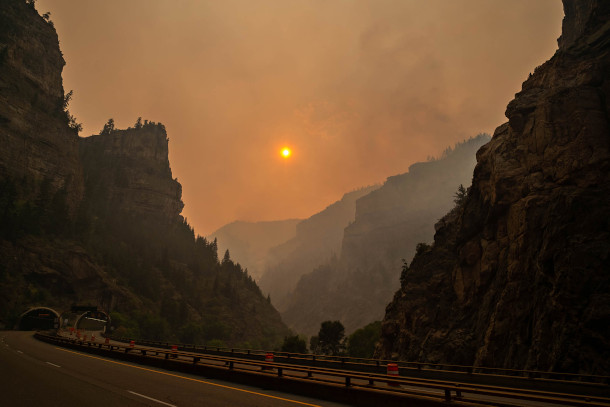 BOYCE: He says truckers outside Colorado will often opt to bypass the state entirely during an I-70 closure. More mileage, more money, more time. Colorado senator Michael Bennet on that Glenwood Canyon fire tour paints what happened here as an opportunity.

BENNET: We need to put more people to work in our forests doing the fire mitigation and the work that can be done to help prevent these fires from happening in the first place and make them easier to fight when they happen.

BOYCE: That could mean a lot of jobs in the rural West. Congress would have to pay for them though. And looking at transportation spending, the American Society of Civil Engineers estimates there's already a $1.2 trillion dollar gap in funding for travel infrastructure nationally. And that's before the impacts of climate change are taken into account.


Learn more on the Colorado Department of Transportation Website

Read more on CODOT’s 50th Anniversary of the Interstate System

Stay up to date on the Grizzly Creek fire at InciWeb