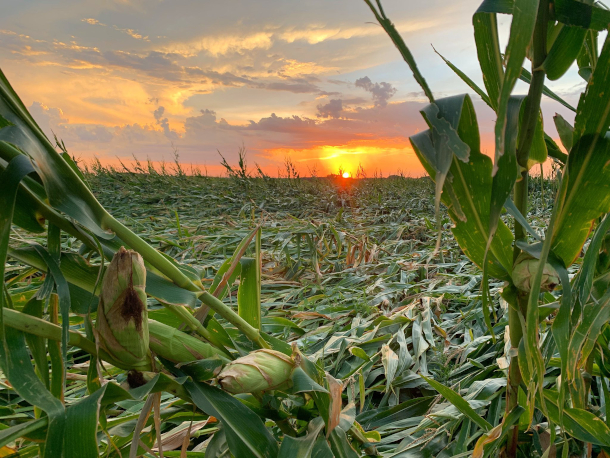 Iowa’s Senate seat is hotly contested in this election, and the Senate race in Kansas appears tighter than it has been in decades. Both states are experiencing increasingly erratic and destructive weather linked to the warming of the planet. Reporter Georgina Gustin has covered the climate rhetoric of the Iowa and Kansas Senate races for InsideClimate News, and joins Host Bobby Bascomb to discuss the divide between these mid-America Democratic and Republican senate candidates on climate change.

We continue our Senate election coverage this week with two key races in the Midwest. Iowa’s seat is hotly contested. And in Kansas, which has not had a Democratic Senator since 1939, polls show the race is tighter than it has been in decades. Extreme heat, floods, and droughts are among the climate impacts that residents and farmers who drive the Midwest economy have to contend with. For more, I’m joined now by Georgina Gustin, a reporter for InsideClimate News who has been following the Iowa and Kansas Senate races. Welcome to Living on Earth!

GUSTIN: Thanks for having me.

BASCOMB: So first of all, Georgina, what kinds of climate impacts are facing voters in Kansas and Iowa? 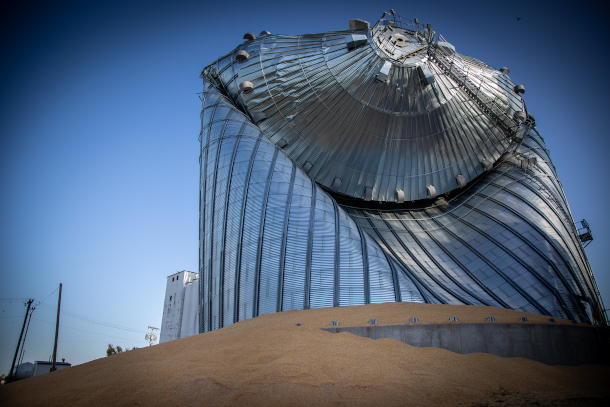 A grain silo in eastern Iowa twists and crumples in the wake of the August 2020 derecho, spilling thousands of bushels of corn. (Photo: Phil Roeder, Flickr CC BY 2.0)

GUSTIN: This year, Iowa saw a series of really weird, flukish storms in August, and there was pretty bad flooding and drought last year. And it's really over the course of the last several years that both states have been seeing the climate impacts on the ground. And I think what was an abstraction for a lot of farmers has become very real. And experts have projected that climate change would impact those states and the crops in particular for a long time. And going forward, they're going to have reduced yields of their major crops, which are obviously very important to both states. That's what the scientists are saying. But I think the reality in these last couple of years with these very extreme events, has made climate change part of the conversation there in a way that it hasn't been in the past. 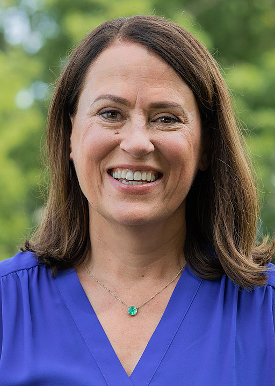 BASCOMB: Well, let's dig into the races a little bit. Let's start with the Iowa Senate race, where incumbent Republican Joni Ernst is facing a tough race against Democrat Theresa Greenfield. What is notable about how each of the candidates talk about climate and the environment?

GUSTIN: Well, both Greenfield and Ernst grew up on farms. And so they have that in common. And I think that's a really important characteristic for Iowa voters, because they can relate to that, and it feels very much of the state. It's obviously a heavy agricultural state and that shared background is, is important. Ernst is very clearly a climate denier. She has said she does not believe that climate change is human caused. And so her position is very clear. Theresa Greenfield has said that she believes climate change is affecting Iowa, particularly its farmers. But she has not been super specific with her climate policies. And she has, for example, not been clear about whether she supports the Green New Deal, and other climate-related policies. So she has to tread kind of a fine line there.

BASCOMB: That seems to be the moderate Democrat approach to this, generally. Now I understand that Ernst has a 1% League of Conservation Voters score, meaning that she's voted in favor of the environment, or at least as LCV sees it, only 1% of the time. That's a pretty bad record for the environment, you almost have to be trying to get that low of a score. 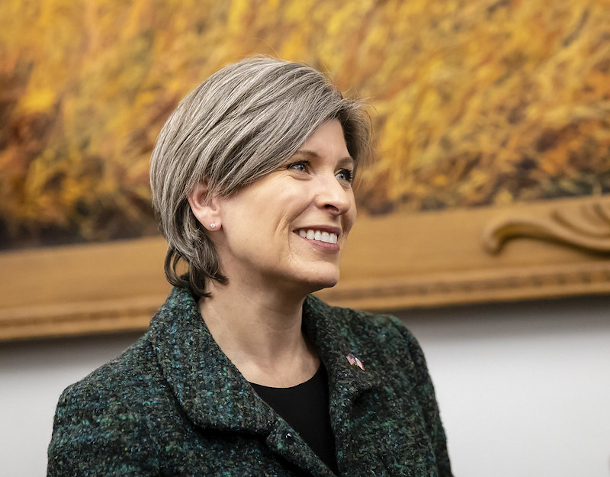 GUSTIN: Yeah, she has a terrible score with the League of Conservation Voters, I think it might be the worst or among the worst, certainly. And she's in a bit of a situation in Iowa, because she has to, she's a supporter of ethanol, which is just central to the state's farmers and the state's economy. But she has also been very supportive of the oil and gas industry, which has been very supportive of her. And the oil and gas industry and the ethanol industries are at odds with each other because the oil and gas industry doesn't want to have to blend corn ethanol into fuel. And I think she's really lost ground with some farmers because she has supported the Trump administration's granting of waivers to oil and gas refineries that exempt them from blending a certain amount of ethanol into the fuel supply. That means less demand, potentially, for ethanol. So it's a very tricky issue for this administration, it's a tricky issue for Ernst, and she could lose ground. Because, of course, in Iowa, corn is king; if you do anything to tamp demand for corn, you could be losing some votes.

BASCOMB: Well, let's talk about the Kansas race now. Republican Senator Pat Roberts is retiring and leaving a vacant seat there. How are Republican candidate Roger Marshall and Democrat Barbara Bollier talking about climate change and the environment? 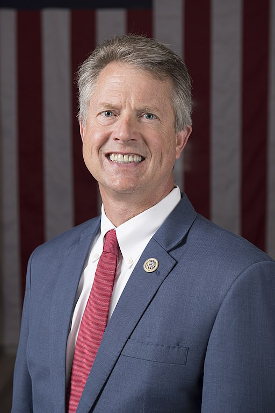 Congressman Roger Marshall, the Republican nominee for U.S. Senator from Kansas, is a climate skeptic and has regularly ignored CDC guidance on mask-wearing and social distancing during the COVID-19 pandemic. (Photo: Eric Connolly, U.S. House Office of Photography, public domain)

GUSTIN: Barbara Bollier believes that climate change is real and human caused. And Roger Marshall has said that he believes that it is part of a natural variation, and questions whether human activity has caused climate change. So again, it's a really partisan, almost predictable position from both candidates. And again, they are not super clear on their climate policies. Bollier has said that she does not support the Green New Deal. And her policy proposals on climate are pretty vague.

BASCOMB: Now I understand that both these candidates are actually medical doctors and actually went to the same medical school, even, but they have a very different approach here.

GUSTIN: Yeah, it's a really interesting factoid, I guess. They both went to the same medical school, as you say. They're both practicing doctors. They're both people of science. And yet on climate change, Marshall seems to be abandoning science for partisan position. And he's done the same with the coronavirus. He has not worn masks at many public events that he's had, whereas Bollier has held virtual events and always wears a mask when she does public events.

BASCOMB: Well, Georgina, what do you think the Iowa and Kansas races have in common in the ways that the candidates are talking or, you know, maybe not talking about climate change? 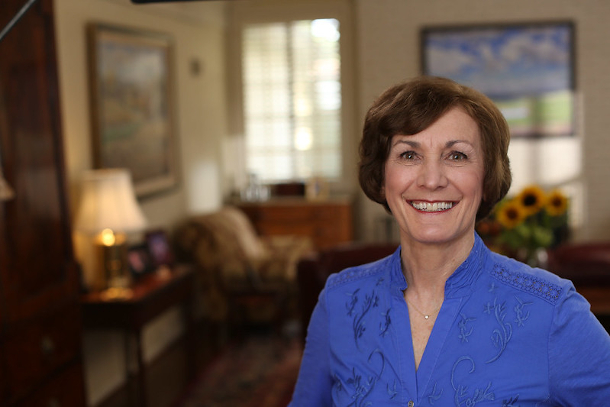 Barbara Bollier, the Democratic nominee for U.S. Senator from Kansas, is currently a member of the Kansas state Senate who left the Republican Party in 2018. (Photo: Barbara Bollier, Flickr CC BY-SA 2.0)

GUSTIN: I think both of these races really illustrate how climate change has become such a partisan issue, and how science has become so politicized under the Trump administration, in particular. You have two doctors with identical backgrounds in terms of their academic training, taking two very different positions on climate, taking two very different positions on COVID-19. And in Iowa, you have an oil and gas senator, you know, potentially losing ground because of her support for that industry. But that might not really sway voters in a sort of outcome changing way. Joni Ernst is very much a climate denier, she maintains that position, and for people that are dug in on that issue, I don't know that their minds will be changed.

BASCOMB: Georgina Gustin is a reporter for InsideClimate News. Georgina, thanks so much for taking this time with me today.


InsideClimate News | “Senate 2020: Iowa Farmers are Feeling the Effects of Climate Change. That Could Make Things Harder for Joni Ernst”

InsideClimate News | “Senate 2020: In Kansas, a Democratic Climate Hawk Closes in on a Republican Climate Skeptic”