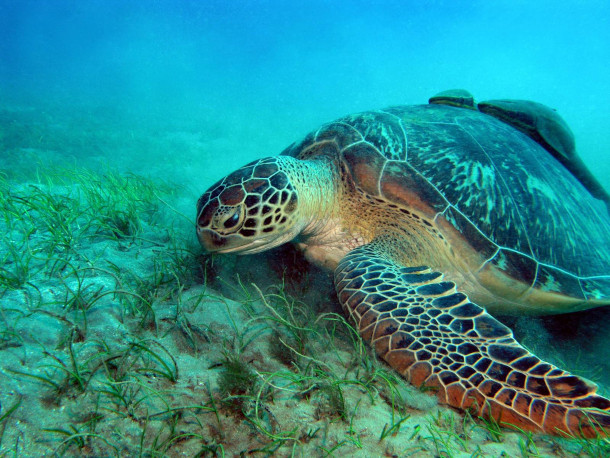 Scientists find that some sea turtle communities nesting along the Red Sea only produce females as a result of a rise in sand temperatures. (Photo: Frank_am_Main, Flickr, CC BY-SA 2.0)

In this week’s “Beyond the Headlines”, Host Steve Curwood joins Peter Dykstra of Environmental Health News to discuss how rising temperatures are disrupting the gender balance of sea turtles. Next, they discuss disinformation campaigns against solar energy in Texas, then dive into the history books to commemorate the 50th anniversary of the Clean Air Act.

CURWOOD: Well, it's time now for us to take a look beyond the headlines with Peter Dykstra. Peter is an editor with Environmental Health News as EHN.org and DailyClimate.org, and he's on the line now from Atlanta. Hey, Peter, what do you have for us this week?

DYKSTRA: Oh, hi, Steve. Got a little bad news from a journal called Conservation Science And Practice. They studied sea turtle nests, loggerhead turtles, hawksbill turtles all nest around the Red Sea. And with each species, including the ones that are most threatened or endangered, there are some nesting populations that produce only female sea turtles.

CURWOOD: Oh, this I imagine has to do with rising temperatures there? Because of course, whether a turtle is born male or female depends on the temperature of their nest during incubation.

DYKSTRA: That's right. And of course, that nest is in the sand, not in the sea. Sand that's about 85 degrees Fahrenheit is considered to be optimum for sea turtles. Once you get above that number, and the higher you go, the ratio of female turtles to male becomes much higher. There's some beaches around the Red Sea, where the sand has measured at 97 degrees Fahrenheit. The study has been replicated in places like Florida, and in an island off Australia. If those beaches continue to get hotter and hotter, it could be a mortal threat to some of the coolest animals in the ocean and on Earth. My favorite are leatherback turtles, enormous with not hard shells, but sort of leathery shells. And to me, they always look like giant Volkswagens swimming in the ocean.

CURWOOD: And when they occasionally come ashore to lay those eggs. What else do you have for us this week?

DYKSTRA: Well, solar energy is hitting growth spurts all over the United States, all over the world in some places. But there's a story out of Texas that focuses on how as solar grows, disinformation about solar grows.

CURWOOD: So wait, how can you have misinformation about solar? Is there something toxic about the sun or what do they claim? 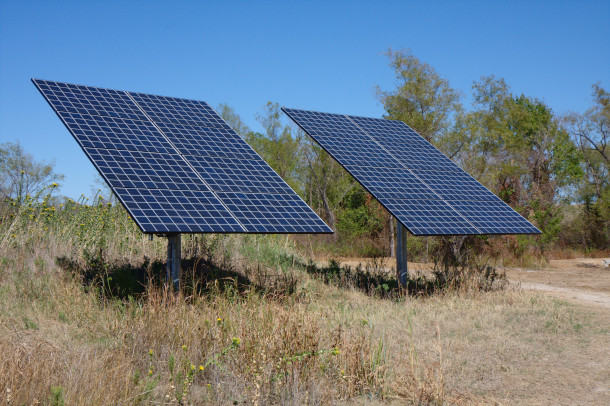 Disinformation campaigns on the dangers of solar are on the rise as more solar panels are installed across Texas. (Photo: Steve Rainwater, Flickr, CC BY-SA 2.0)

DYKSTRA: Not toxic about the sun, but there are some toxic materials in solar panels. Those panels typically might last 30 or 40 years, when the substances in them begin to break down. Critics of solar energy are pointing out that these panels can be torn asunder by hurricanes along the Texas coast. They can otherwise just degrade. And critics claim that it leaves a toxic mess. Of course, the information that those critics base things on are coming from astroturf groups. They appear to be grassroots, but they're actually born in industry planning rooms and PR firms. One is called Citizens for Responsible Solar, another is the Foundation for Economic Education, and the Institute for Energy Research, all of which are think tanks funded by people like Charles Koch, and the Heartland Institute, one of the primary think tanks for climate denial. Yeah, there will be a challenge to deal with some of the toxics that are in solar panels. But it's hardly a reason not to convert to cleaner energy than anything we would get from fossil fuels.

CURWOOD: So now that we're in the point in our conversation where we turn to the history books, Peter, and I'm wondering what you want to talk to us about today?

DYKSTRA: We'll go back 50 years of late December of 1970. Congress passed and President Nixon signed the Clean Air Act. It's a monumental law that helped smoky cities like Pittsburgh, come out of some very, very dangerous and unhealthy situations. The Clean Air Act was further strengthened in 1977 when Jimmy Carter was president. And in 1990 and 91 when George H.W Bush, the older Bush, was president. It controls acid rain, it controls mercury emissions, smog, soot, many of the things that cause some serious health problems in the lungs of Americans from coast to coast.

CURWOOD: Give me some measures of its effectiveness, this bipartisan effort back 50 years ago to have a Clean Air Act.

DYKSTRA: A study done by the Environmental Defense Fund back during the Obama administration estimated that 4.2 million lives have been extended or saved by the rules and regulations of the Clean Air Act. And in 2012, an EPA estimate put the prevented deaths at about 184,000 a year. That same estimate put the savings to Americans at $22 trillion saved mostly in insurance and health care costs, the reduction of missed work times, and so many other things that are occasioned by heart disease, heart attacks, asthma and all of the respiratory diseases that the Clean Air Act was designed to help reduce. It's 50 years later, and it seems to be working.

CURWOOD: And of course thanks to the Supreme Court the Clean Air Act now allows the EPA to regulate the global warming gas CO2 as a pollutant. Peter Dykstra is an editor with Environmental Health News as ehn.org and daily climate.org. We'll talk to you again after the holidays, Peter. Happy holidays!

DYKSTRA: After the holidays and in the year everyone's been waiting for lately, 2021. Will talk to you then.

CURWOOD: And there's more of these stories on the Living On Earth webpage. That's loe.org.

Texas Observer | “Solar Energy Is Hitting a Growth Spurt. So Is the Disinformation Around It”

Grist | “Solar Panels Are Starting to Die. What Will We Do with the Megatons of Toxic Trash?”