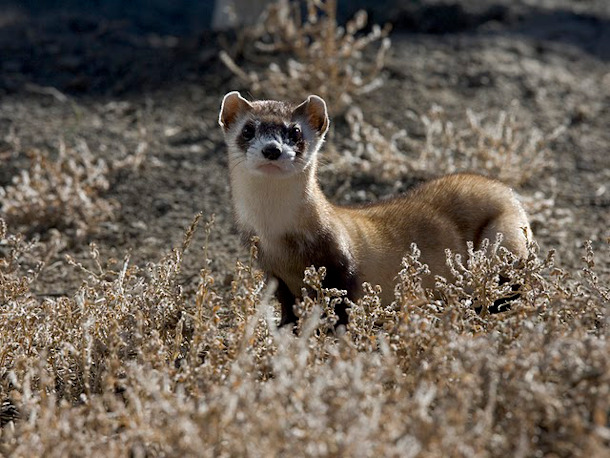 The black footed ferret became one of the most endangered species in North America, thanks to a government program to poison prairie dogs, a primary food for these ferrets. (Photo: Ryan Hagerty, USFWS, Flickr, CC BY 2.0)

In this week's Beyond the Headlines segment, Environmental Health News Editor Peter Dykstra and Host Steve Curwood discuss the first successful cloning of a US endangered species, the black-footed ferret. Next, they unpack the double-trouble of drilling for oil in the Arctic National Wildlife Refuge (ANWR), and the role of the Porcupine caribou herd to trim vegetation and maintain a bright albedo. Finally, they travel back in history to March 1, 1954, the day that the US detonated a massive hydrogen bomb at Bikini Atoll.

Well, it's that time of the broadcast when we take a look beyond the headlines with Peter Dykstra. Peter's an editor with Environmental Health News that's ehn.org and dailyclimate.org. On the line now from Atlanta, Georgia. Hey there, Peter, how are you doing? And what are you going to talk to us about today?

DYKSTRA: Hi Steve. We're going to travel out to the Great Plains of the United States on the news of the first cloning of a US endangered species, the black-footed ferret.

CURWOOD: Okay, so what do you have to tell us?

DYKSTRA: This happened in December, but it was just announced a week ago. Scientists cloned the black-footed ferret from the genes of an animal that died over 30 years ago.

CURWOOD: Endangered, why are they so endangered?

DYKSTRA: Black-footed ferrets, known to me as BFFs, although I think that's been claimed elsewhere in social media, were nearly wiped out largely from a widely known program of the Animal Services Department of the US government. The prairie dogs were poisoned. Black-footed ferrets are adorable, but they're also fierce predators, and prairie dogs were their main food source.

CURWOOD: Yeah, they're not the best smelling animals either, those ferrets, but they are pretty adorable. Okay, Peter, let's take a look around and tell me what else you see beyond those headlines. 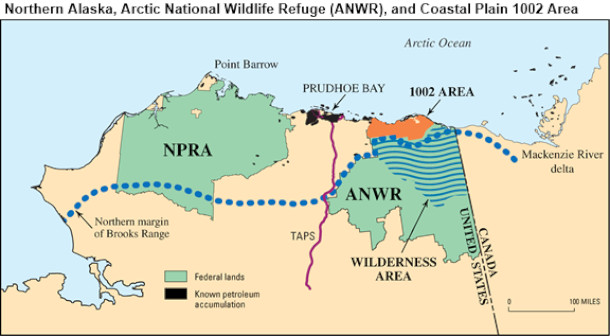 The Arctic National Wildlife Refuge is located in Northeastern Alaska and consists of 19,286,722 acres, making it the largest national wildlife refuge in the United States. Area 1002, the area under consideration for oil exploration, is a summer calving and feeding ground for Porcupine caribou. (Photo: EIA, Flickr, Public Domain)

DYKSTRA: We'll go from the Great Plains up to the Arctic National Wildlife Refuge (ANWR) in Alaska. It's been a political football kicked back and forth between environmentalists, oil executives, and the state of Alaska for over 30 years. In the dying days of the Trump administration, they carried out a lease sale in ANWR. Oil companies were less than enthusiastic about it. But if oil drilling is started in ANWR, scientists are concerned that it will have a double impact on the area's carbon emissions.

CURWOOD: And how would that be?

DYKSTRA: Well, one, of course is that you're drilling for oil, and if you're going to use it, you're impacting carbon. But the other one is that oil drilling in the same place as the herd of 150,000 Porcupine caribou come in late spring and summer to feed. If it changes their behavior, and there's less feeding on the vegetation, then the shrubs that grow in late summer and spring in the midnight sun will grow higher. And if they grow higher, they'll be a darker surface. That's known as albedo. The white snow reflects heat, the darker shrubbery would absorb it. And the whole process of melting the permafrost in that part of the Arctic National Wildlife Refuge happens quicker. 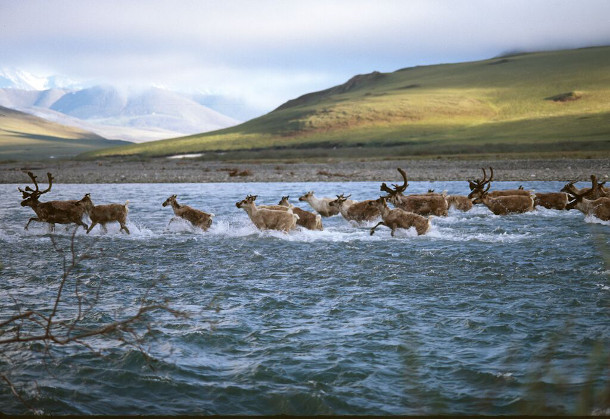 Porcupine Caribou migrate some 1500 miles from Alaska to the Yukon border and back each year and are the primary sustenance for the Gwich'in and First Nations of Alaska. (Photo: Gary Braasch, NWF, Flickr, CC BY-NC-ND 2.0)

CURWOOD: Well, let's take a look back in history now. Tell me what you see there.

DYKSTRA: March 1, 1954, the US detonated a massive hydrogen bomb, the biggest ever at the time, in the atmosphere at Bikini Atoll in the Pacific. The crew of a nearby Japanese fishing boat called the Lucky Dragon is felled by radiation sickness. One of the crew dies, the other 22 are sickened, even as they brought their nine tonnes of presumably radioactive tuna back to market in Japan.

CURWOOD: Yeah, the world I don't think was so happy about our explosion there at Bikini in March of 1954 as I recall.

DYKSTRA: Not only was it a big factor in banning atmospheric tests in the early 1960s, but if you've ever watched the original Godzilla movie, something based on the Lucky Dragon's disaster, is how the movie, first of 22 Godzilla flicks, got its start.

CURWOOD: And this wasn't exactly a small bomb that they used at the Bikini Atoll on March 1 of 1954, right?

DYKSTRA: That Bikini blast was 1000 times as strong as the blast that wiped out Hiroshima. 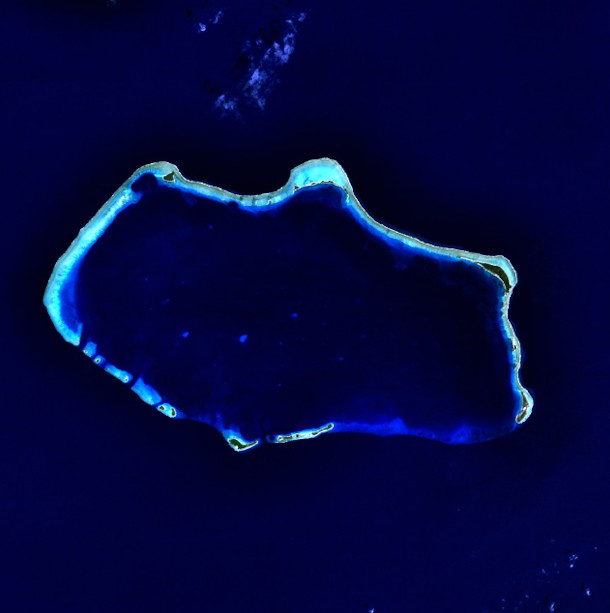 Between 1946 and 1958 the United States carried out detonations of 23 nuclear weapons on Bikini Atoll in the Marshall Islands. The inhabitants of the Marshall Islands were exposed to harmful radiation and had to be evacuated three days after the explosions. (Photo: NASA, Wikimedia Commons, Public Domain)

CURWOOD: Thanks, Peter. Peter Dykstra is an editor with Environmental Health News, that's ehn.org and dailyclimate.org. We'll talk to you again real soon.

CURWOOD: And there's more on these stories at the Living on Earth website, that's loe.org.