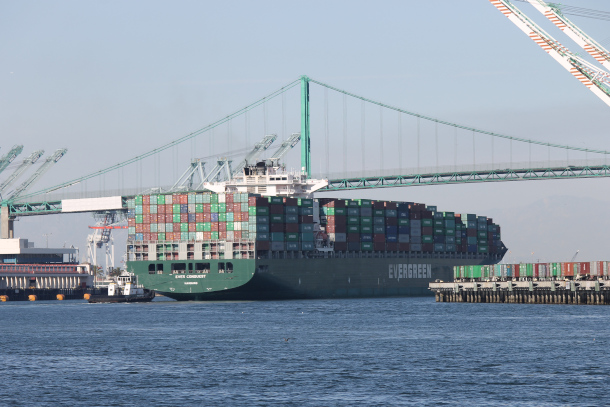 Researchers calculated that California’s rules reduced diesel exhaust by 78% compared to 51% for federal rules, through regulations for shipping, buses, and cars. These changes led to fewer deaths from heart attacks and lung disease. Pictured: The Ever Conquest Container Ship in the Port of Los Angeles, which adjoins the Port of Long Beach. (Photo: Corey Seeman, Flickr, CC BY 2.0)

In this week's Beyond the Headlines segment, Environmental Health News Editor Peter Dykstra and Host Steve Curwood discuss why there was enormous natural gas flaring in the midst of the crippling power outages this February in Texas. Next, they look at how California has saved lives over the last three decades by reducing diesel emissions by 78%. Finally, they travel back to 1815, the year Mount Tambora in Indonesia erupted, circling the world in smoke and ash, resulting in what was later called “the year without a summer.”

CURWOOD: Well, let's take a look beyond the headlines now with Peter Dykstra. Peter's an editor with Environmental Health News that's ehn.org and dailyclimate.org. On the line now from Atlanta, Georgia. Hey there, Peter, how you doing and what have you got for us today?

DYKSTRA: Well, Steve, I'm doing okay. Except like a lot of people, I'm battling the pollen here in the southeast. A friend of mine posted a picture of Lake Lanier, a big lake north of Georgia, and there was what appeared to be from an aircraft, almost an iceberg of pollen floating down the lake. But I'm coping with it, the rest of us are coping with it. And that's the one downpart to what's going to be a beautiful spring.

CURWOOD: Well, and you have got to admit that the trees and flowers love the pollen. Hey, what do you have for today?

DYKSTRA: Well remember, last month, frigid temperatures in a lot of places. Texas got hit really hard, and unexpectedly, the oil and gas industry got hit extra hard. Machinery, pipelines are frozen, companies had nowhere to move their natural gas even if they could, because the electricity they needed to run natural gas facilities and pipelines was nowhere to be found as the Texas grid failed. So the only choice that gas producers had in Texas was to increase their already toxic venting of greenhouse gases, particularly methane, by a factor of five, all wasted, and the only thing it could do is contribute to a warming climate.

CURWOOD: Instead of warming the people who were freezing in their homes with the power grid out since they mostly used electricity to stay warm. Hey, what else do you have for us today?

DYKSTRA: This is from another big state, California, and it's potentially good news. California, of course, has led the nation in being aggressive about sources of air pollution. Their rules on diesel exhaust may have shown a huge health benefit. California's crackdown on diesel fumes from passenger vehicles, planes, locomotives, construction equipment, reduced the impact of those diesel fumes by 78% last year. Compared to 51%, for all the states still operating under the more lax federal rules.

CURWOOD: Wow. So they saved a bunch of lives. And of course, during this pandemic, we know that particulates from fossil fuel, including diesel, make COVID worse, make people more likely to get sick and die.

DYKSTRA: And all of the factors that go into either failure or success in dealing with COVID, this is a unique one. But it's a big education on how conscientious enforcement can save lives and make our air easier to breathe. 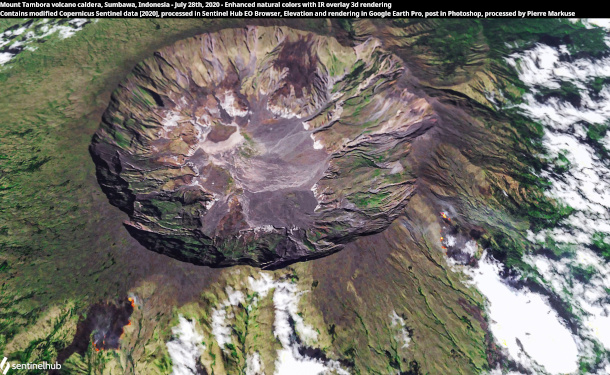 The eruption of Mount Tambora created a global haze of smoke and ash, plunging the world into what is known as the year without summer. (Photo: Pierre Markuse, Flickr, CC BY 2.0)

CURWOOD: Just recently, Peter, we saw the studies showing that around the world some 8 million people every year die from particulates from burning fossil fuels and 300,000 a year right here in this country. So now it's time for us to go to history class with Professor Dykstra, and what do you have for us today?

DYKSTRA: Indonesia's Mount Tambora erupted on April 5, 1815. It's a 13,000 foot peak that in a flash became a 9000 foot mountain. The top of that mountain sent dust and smoke and aerosols around the world in what was later called the year without a summer.

CURWOOD: Yeah, that's right. When volcanoes erupt, they have these particulates that go in the high atmosphere and can kind of block out sunlight. How much did temperatures decline with this eruption of Tambora? Do you know?

DYKSTRA: It may be around three degrees Fahrenheit, and in some parts of the world, famine and malnutrition and starvation followed.

DYKSTRA: Okay, Steve, thanks a lot, talk to you soon.

CURWOOD: And there's more on these stories at the Living on Earth website, that's loe.org.

Smithsonian Magazine | “Blast from the Past”