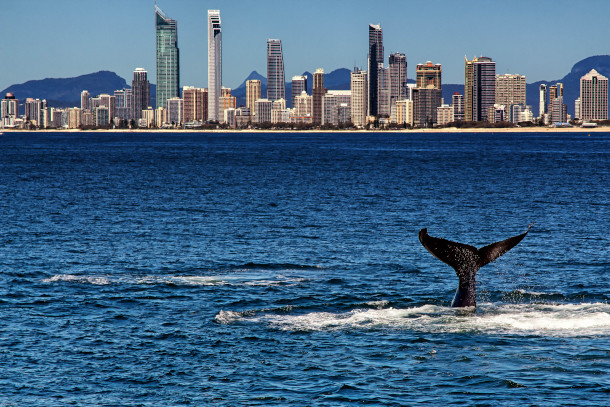 A humpback whale off the shore of the Gold Coast in Australia. (Photo: Steve Austin, Flickr, CC BY-ND 2.0)

On this week's trip Beyond the Headlines, Environmental Health News editor Peter Dykstra joins host Bobby Bascomb to talk about the resurgence of humpbacks in Australian waters. Then, a look at a Sri Lankan beach covered in 2 feet of plastic pellets called nurdles. Finally, the pair check the history books for a story where a nuclear power plant was converted into a massive park and solar-generating station.

BASCOMB: It’s living on Earth. I'm Bobby Bascomb. It's time for a trip now beyond the headlines with Peter Dykstra. Peter's and editor with Environmental Health News that's ehn.org and dailyclimate.org. Hey there Peter, what do you have for us this week?

DYKSTRA: Hi Bobby. A little good news, bad news item from Australia. And we'll get the bad news out of the way quickly. And first, the mild Australian winters that have happened in the last several years have helped cause a population explosion of crop eating mice all over the southeastern part of the country, the state of New South Wales. Farmers are desperate to control them. They've turned to a banned pesticide to try and control these mice. And that climate change and all those mild winters are a part of the cause.

BASCOMB: Oh man, that sounds like a problem. Well, what's the good news from Australia?

DYKSTRA: The good news is really cool. And that's that humpback whales, once seriously endangered in the southern hemisphere, have made an absolutely spectacular comeback. Experts estimate there are about 40,000 humpbacks that migrate each year between the southern oceans around Antarctica and the oceans around Australia. And there are 40,000 there used to be 1500 a half century ago, mostly wiped out due to wailing.

DYKSTRA: No whaling is a big help. Whaling was banned in Australia in 1978. The fleet's from the former Soviet Union and Japan that used to go down to the Antarctic, no longer touch humpback whales. Japan is the only nation that goes down there at all. And humpbacks have been completely protected from hunting. Their food source is mainly krill, those tiny little crustaceans, and although krill are under some threat from fishing, in the southern oceans around Antarctica, humpbacks have still been able to get their fill of krill. And so they're doing well.

BASCOMB: Wow, that's amazing. Let's hope that trajectory continues. What else do you have for us this week?

DYKSTRA: We go over to the beaches of Sri Lanka. They are facing what some have called the worst beach pollution problem in history. All from a wrecked freighter, the MV Express Pearl registered in Singapore. It's sinking and burning off the coast of Sri Lanka and releasing a big part of its cargo. Those little plastic granules called nurdles. The nurdles are washing up on the beach and in some areas of the beach they're reportedly two feet thick. Now you live in New England two feet of snow isn't a big deal and the snow goes away on its own. But how about nearly two feet of plastic nurdles that only go away if humans shovel it away.

BASCOMB: Oh my gosh, what a disaster. I mean, it's both an ecological disaster as we know fish and all sorts of marine life eat those little plastic nurdles, mistaking them for food and then I would think the fishermen I mean, how you gonna make a living if the fish are polluted and the beaches are full of plastic.

DYKSTRA: And it's a global problem. You know, I first saw tons of nurdles on a beach, a once pristine beach in Costa Rica back in 1986. And I had no idea that it would become as big a menace microplastics in all sorts of animals in our own diets as it's become, it could be a twin menace with climate change.

BASCOMB: Yeah, it's certainly right up there. Well, what do you have for us from the history books this week?

DYKSTRA: June 7th 1989 voters in that referendum in the city of Sacramento, California, voted to close the municipally owned Rancho Seco nuclear power plant. And today that site is a 400 acre park with a sizable solar generating station.

BASCOMB: Wow, that's amazing. So the ratepayers themselves decided to get rid of nuclear in favor of solar. 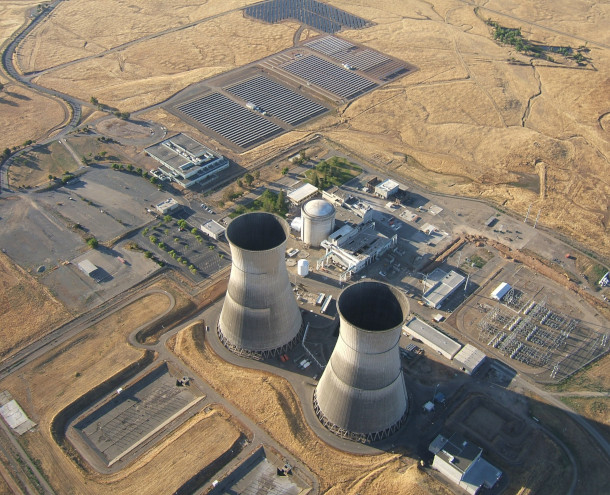 DYKSTRA: Because at that particular plant, they were paying too much rate. The plant was very inefficient. It averaged about 40% of capacity. voters had had enough and the anti-nuke forces beat the pro-nuke forces in the campaign. And won by six points.

BASCOMB: Well, that was a pretty close vote and now they have a park to show for it.

DYKSTRA: They do and a solar station.

BASCOMB: There’s more on these stories on the Living on Earth website. That's loe.org.