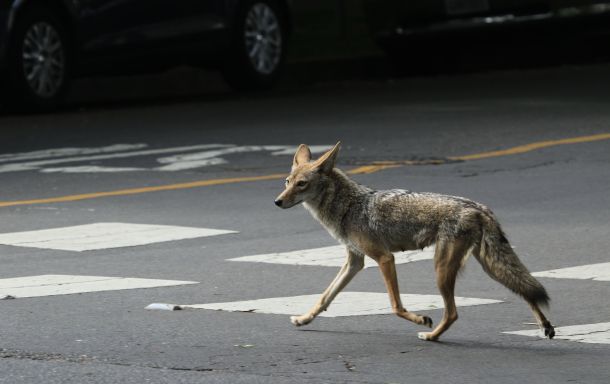 The coyote darts across a street in Sacramento. (Photo: Jennifer Berry Junghans)

In an era of remote learning and spotty Zoom meetings, we humans still have it easier than many animals trying to raise their young. Writer Jennifer Berry Junghans on how a mother coyote manages to eke out a living in the heart of California’s capitol.

BASCOMB: Isolating during the pandemic put a spotlight on the challenges of parenting in the absence of childcare. Still, we humans probably have it easier than many animals trying to raise their young. Here’s writer Jennifer Berry Junghans on how a mother coyote manages to eke out a living in the heart of California’s capitol.

JUNGHANS: She dug her den in the dense ivy butting up against the sidewalk in a residential neighborhood of midtown Sacramento. A fresh mound of dirt at the entrance of her 10-foot burrow gave it away, behind caution tape that warned passersby to keep out. 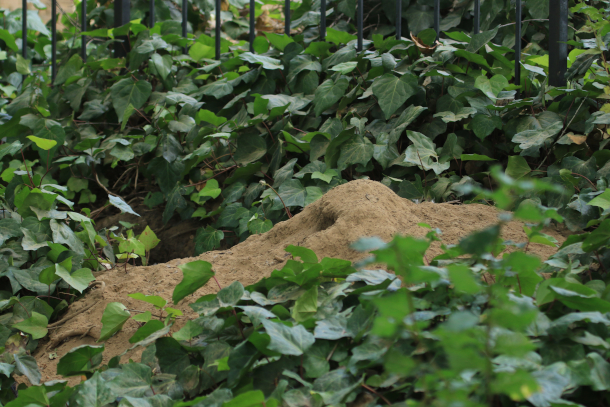 I meet up with a friend. Within minutes we see her in the parking lot behind us. She rests under a southern magnolia but looks tense.

She glances left, right, forward, back, like hands on a clock gone mad.

I wonder if she wonders where her two pups are. They’re 11 weeks old now, still small and cuddly to the eye but independent enough to roam the city without her. I think of the possibilities of what could go wrong. I think of her natural habitat along the riparian corridor of the American River, where pups play and tumble on golden knolls as moms watch nearby. A land she knows, rules even. A land where she is at home. 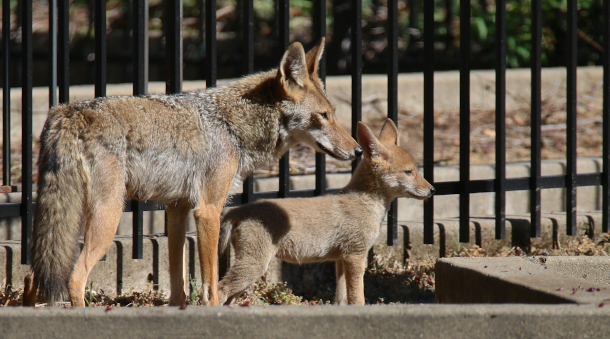 The mother coyote and one of her two pups. (Photo: Guy Galante)

But here in the city, it isn’t long before a man barrels into the parking lot and chases the coyote with his car. It’s distressing to see and it brings to life the tension of this scene. Some people are thrilled to share space with her and her pups. Others want them eradicated, like the man in the car. Some are fearful, some are fearful for them, and others pour bags of cat food on the ground, unintentionally habituating her to this booby-trapped urban setting.

She’s agitated now, jumpy and uncertain as she bolts across the street and wanders through lanes with the swift leggy gait of a moving target. She locks eyes with me as she moves and I swear she can see through me. Moving through the intersection, she boomerangs back across the street, darts through parked cars, then down the sidewalk and heads my way. She sees me, and ducks into overgrown landscaping. I spot her again about 20 minutes later, grabbing a few mouthfuls of cat food. Something startles her. She jumps straight up in the air and lands a few feet away in the street. 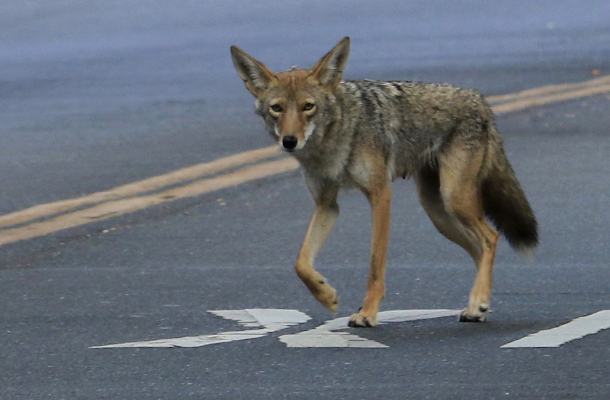 “I swear she can see through me,” Junghans writes of the mother coyote. (Photo: Jennifer Berry Junghans)

I think about my choice to come see her. To bear witness to her experience, but my good intention is stripped down naked. I am just one more encounter she must gauge and respond to in this calamity of human activity.

State laws say she can’t be relocated. Even if she could, she may not find adequate food or water. And if she’s moved to a dominant coyote’s territory, he may attack her and kill her pups.

So the plan is to keep the peace between man and beast, discourage her presence and hope she returns to wilder land.

It’s unlikely this will be the last time a coyote makes her den in midtown. We see them more and more, comingling in the spaces we call home. I wonder if one day we’ll mirror London, where wild red foxes that live among the urban neighborhoods are as common as cats lounging outdoors and people walking their dogs. 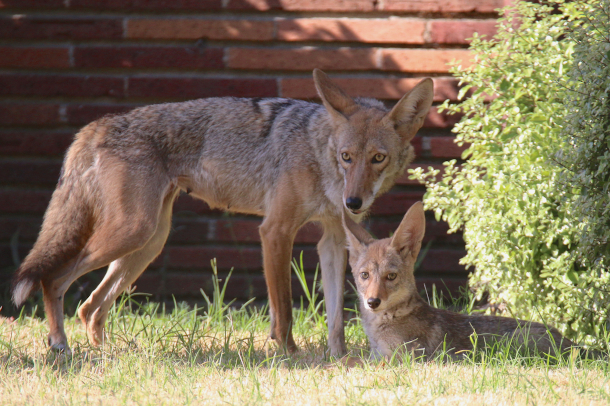 Both mother and pup are always on the lookout for danger. (Photo: Guy Galante)

But for now, we have no unity among our understanding of these animals or in our ability to live in harmony with them.

Eventually, I go home. And her struggle continues on.

More from Jennifer Berry Junghans on LOE: “The Pear Tree”