“Land Back” for Indigenous Peoples 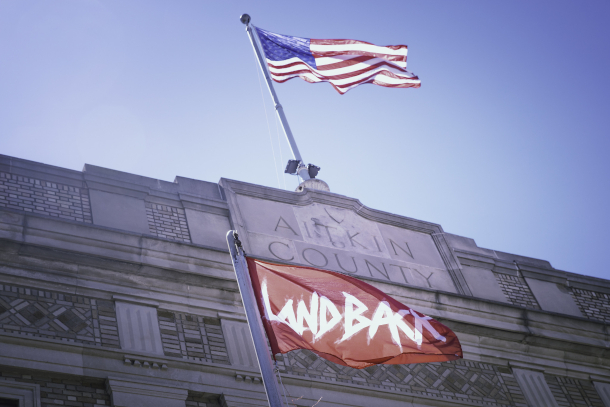 A Land Back flag flies under the US Flag outside Aitkin County Courthouse in Aitkin, Minnesota. (Photo: Laurie Shaull, Flickr CC BY 2.0)

For Indigenous People’s Day we take a look at the “Land Back” movement that seeks to return land to its original inhabitants in North America or at least restore meaningful connections to those lands. To start, some Native Americans are campaigning for the return of the sacred lands of the Black Hills or “Hesapa” in South Dakota, which include Mount Rushmore. Krystal Two Bulls, Director of the Land Back Campaign at NDN Collective, speaks with Host Bobby Bascomb about the significance of the area and why “Land Back” aims to benefit all peoples.

BASCOMB: From PRX and the Jennifer and Ted Stanley Studios at the University of Massachusetts Boston, this is Living on Earth. I’m Bobby Bascomb.

This US holiday weekend has long been known as Columbus Day but is now celebrated by many as Indigenous Peoples Day. It’s a day to reflect on the legacy of first contact between Europeans and Native Americans. Columbus and his 1492 “discovery” kicked off a pattern of land theft and genocide that would sweep across the US fueled by a European perspective that the land and its people were their God-given right to claim and subdue. The entire region was once home to diverse native peoples, but today they hold just 2 percent of the land, an area about the size of Idaho. Now some native groups are calling for their tribal land to be given back to them. For more we called up Krystal Two Bulls, Director of the LANDBACK Campaign at NDN Collective. Krystal, welcome to Living on Earth!

TWO BULLS: Thank you for having me.

BASCOMB: So what exactly does "Land Back" mean for you? 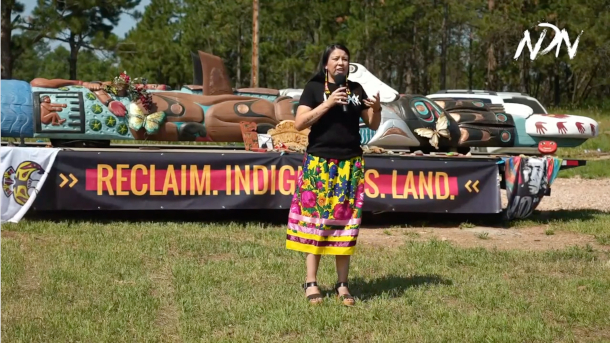 Krystal Two Bulls speaking about Land Back at a ceremony in Hesapa, the Black Hills, on July 21, 2021. (Photo: courtesy of NDN Collective)

TWO BULLS: You know, Land Back means a lot of different things. But I would say first and foremost, Land Back is very much the literal reclamation of land. And it's the reclamation of everything stolen from us when we were forcibly removed from the lands. So we were fully thriving economies and societies that, you know, were fully functioning here before colonization. And so our kinship systems, our governance systems, our health care, housing, food, you know, education systems, all of these things were based on our relationship to the land. And more significantly, it's our spirituality, it's our culture, it's our language, and it's the ceremonies, all of which are very tied to the land as well. And so Land Back is reclaiming all of those things. And it's literally reclaiming the land, not in a colonial sense of, in terms of like ownership of the land, but using that as a tool to be able to get access to, to rebuild our relationship with the land, you know, and then that builds all of those things, right? And so yeah, like Land Back is literal reclamation of land. And I would say that also, you know, through the Land Back Campaign with NDN Collective, it's also very focused on public lands like federally managed lands and state public lands that were strategically removed from us and placed into like national park system or state parks, to specifically keep us from that land.

BASCOMB: Now, of course, the whole of the United States must have been native land before colonists came along, but it sounds like you want to start with public lands, and specifically, the Black Hills and Mount Rushmore. Can you tell us more about why that area is so special and that you want to begin this campaign there? 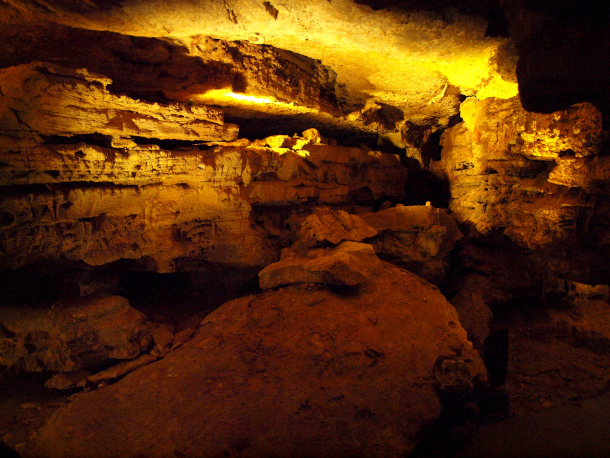 TWO BULLS: Yeah, I mean, for us, the Black Hills, the He Sapa, you know, it was the traditional territory of many different nations, not just the Oceti Sakowin, but the Northern Cheyenne, and different nations all around the area. We came out of the earth there. Our stories tell us we came from these lands, to be the original stewards of these lands, to caretake and be in relationship with these lands. There's water here, our medicines are here, we can hunt here. There's different nuts and berries and fruits that we can gather that grow naturally here. So everything that we need to exist as a people is right here. And we are mandated to protect everything that is sacred, and that gives life. For us, that's what the Black Hills represent is, is a life source, and a connection to our very being as Lakota people. You know, for me, as an Oglala Lakota woman, as a Northern Cheyenne woman, to be connected to that is literally part of my identity. And the fight for the Black Hills has been ongoing since settlers first entered our territory. These are our traditional territories, and these are part of our actual lands, according to the 1868 Fort Laramie Treaty. And for us, Mount Rushmore is like the ultimate shrine to white supremacy. I mean, it was carved by a KKK member; everything about it represents white supremacy in the heart of this so-called nation. Calling attention to that is very significant. Not only is it us doing our duties, and our responsibility of protecting and caretaking this land that gives life, but also it's standing in solidarity and also addressing the fact that this nation was built on white supremacy, and that these systems continue to uphold it. 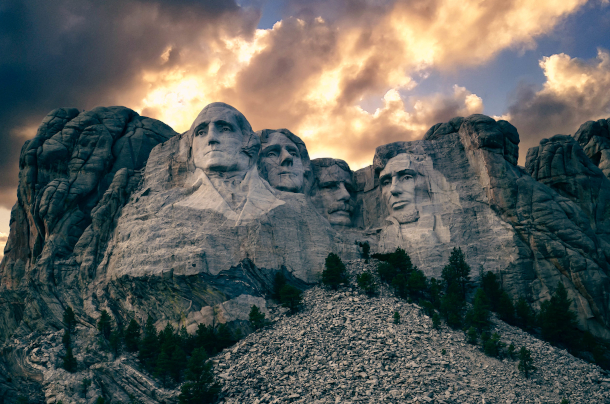 Mount Rushmore is a symbol of white supremacy for some Native Americans, with its depiction of four white male US presidents, including Washington and Jefferson who both owned African American slaves, and Theodore Roosevelt, who called for the removal of “the red man” from National Parks. It was carved by a sculptor with close ties to the KKK (Photo: Udo S, Flickr CC BY-NC-ND 2.0)

BASCOMB: Well, Krystal, what would it actually look like for land like Mount Rushmore in the Black Hills to be returned to Indigenous people? How would that work?

TWO BULLS: Yeah, I mean, there's so many ways that Land Back is happening right now. And specifically with the Black Hills, you know, it looks like land literally being returned to the Oceti Sakowin, and that includes Mount Rushmore. You know, that's just one example in terms of like federal, right and these federally managed lands, but I think there's so many stories of individuals returning land back to nations, or tribal members, or to native-led organizations. There's stories of nations able to purchase back pieces of land, and to be able to get them back in trust, and to be a land base for their community and their peoples. Land trusts are definitely an avenue for land reclamation to happen. There's land occupations, where different nations have treaty rights, and rights over these territories that were not honored by the United States government and that were broken. And so nations are occupying those lands and reclaiming them. Land Back can look many, many different ways. You know, and for us with the Black Hills, it does very much include those lands being returned back to the Oceti Sakowin, and being managed by us as well. 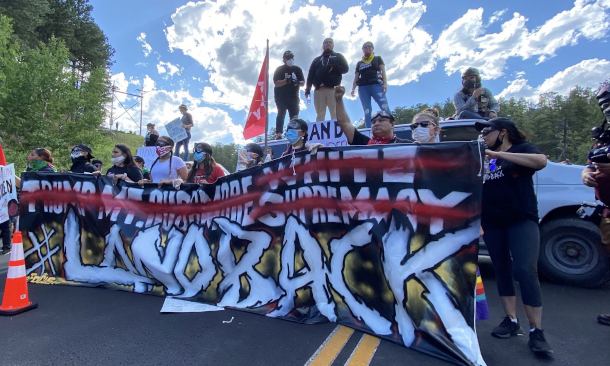 On July 3, 2020, just before former President Trump held an Independence Day event at Mount Rushmore, Indigenous land defenders blocked a major highway leading to the monument and called for the return of the Black Hills (Hesapa) to the Oceti Sakowin. (Photo: Willi White, NDN Collective)

BASCOMB: And if they were managed by you, would you still feel comfortable having tourists and visitors come to visit them as they do now?

TWO BULLS: I mean, I think those are like larger conversations that I can't really give a specific answer to, you know, because like that's not my right to say and speak on behalf of an entire Oceti Sakowin Nation. But what I will say about that is that, we are not here to replicate colonial systems and colonial practices. And so we do this work because we work on behalf of all peoples. Not only are we fighting to reclaim our relationship to the land, but we're also fighting because we know that when we have relationship with the land, and we are the ones stewarding the land, that all people benefit. I think it's somewhere around 20% of Indigenous peoples manage 80% of the world's biodiversity. And that is a huge number, we protect that. 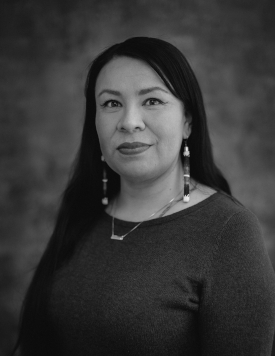 When we are fighting oil pipelines, because we know that they are going to leak and that they're going to pollute drinking water, we don't do that just for our communities. We do that for every community that is downstream from that pipeline that is going to get contaminated water. And for us to really look at mitigating climate change, and really investing in having a world that is inhabitable in the future, it has to start with Indigenous people. It has to be led by Indigenous people because we descend from those systems, those healthy systems and the healthy ideology that benefits and allows for all people to thrive, that creates healthy economies, that creates healthy societies. We know that it is possible because that is what we come from. So we're not here to replicate colonial systems of deporting people and kicking people out and treating people the way that we have been treat[ed]. We are here to show a different way forward. And that starts with us reclaiming land.

BASCOMB: Krystal Two Bulls is Director of the Land Back Campaign at NDN Collective. Krystal, thank you so much for taking this time today.

TWO BULLS: Thank you. Thank you for having me.

High Country News | “The battle for the Black Hills”