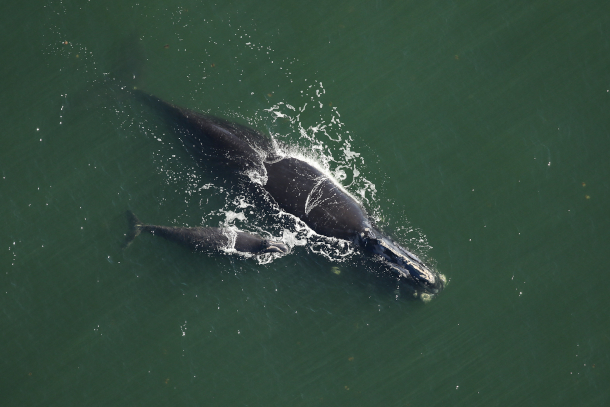 North Atlantic right whales face a number of threats from climate change, vessel strikes, and entanglements in fishing gear, and scientists estimate that fewer than 400 remain. Now researchers have discovered that because of these stresses, the whales are smaller than they should be and that could be leading to fewer successful births. Study co-author Amy Knowlton of the New England Aquarium speaks with Host Bobby Bascomb about what people can do to help this critically endangered species.

BASCOMB: A US District court recently blocked a federal ban on lobstering in a section of the Gulf of Maine that was designed to safeguard endangered North Atlantic Right whales. Judge Lance Walker ruled federal regulators had relied on “markedly thin” analysis and had failed to provide hard enough evidence that the Right whales too often get entangled in fishing gear, encounters that scientists say can be fatal. The government is expected to appeal the ruling as it continues to try to protect North Atlantic Right Whales, which are one of the most endangered cetaceans in the world, with roughly 400 remaining. This year scientists say 19 living Northern Right Whale calves were born, which is more than the past 3 years combined but still less than a third the previous average annual birth rate. Climate change, vessel strikes, and the entanglements cited in the court case have had scientists sounding the alarm about this crashing population for decades. And now researchers have discovered yet another threat to their survival. The whales, on average, are actually shrinking in size. Typically, they should be roughly 140,000 pounds and up to 52 feet long. But a new study finds that young North Atlantic Right whales are not growing to their full potential. For details, I’m joined now by Amy Knowlton, a Senior Scientist at the New England Aquarium and a co-author of the study. Welcome to Living on Earth, Amy!

KNOWLTON: Thank you. Thanks for having me.

BASCOMB: So, you are a co-author on the study that found that Right whales aren't growing as large as they used to, what's going on there? What have you found?

KNOWLTON: Well, what we found is that the average reduction length is about three feet when they reach their full length. So, three feet shorter than they were back in the early decades of our studies in the '80s, and '90s. So that's a pretty dramatic reduction in size. A few things seem to be going on. The main concern we have is that there's some indication that entanglements are leading to these shorter whales. The entanglement part of that story was the strongest signal when everything else was compared. And that was only a subset of whales that met the criteria to be included in this paper, meaning that it was either young whales under 10 years old that had attached gear, or it was calves whose mother had either attached gear or severe injuries when that calf was nursing.

BASCOMB: So, what is the source of the entanglements? It's, it must be fishing gear, obviously. But what's going on there exactly? 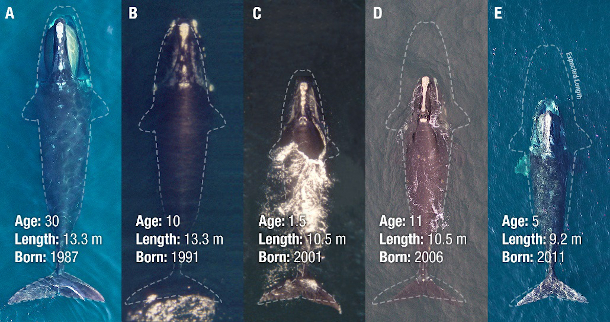 A few examples of stunted growth in North Atlantic right whales, compared to their expected length given their age. (Image: New England Aquarium)

KNOWLTON: Well, there's a lot of lobster gear, crab gear and gill net gear, especially up here off the coast of New England. Right whales, also their filter feeders, so they are moving through the water with their mouths open. And that's where these entanglements begin, typically, is in the mouth. So, they'll hit that rope, they'll start flailing because they're all freaked out, because they're hit something foreign to them, and then they get all wrapped up. If they can't break free from the bottom gear, they could drown. But the other scenario is that they can break free eventually, but they're then trailing a lot of rope behind them, causing energetic impacts, and also probably affecting their ability to feed well. We've shown that over 85% of the population has endured at least one entanglement and close to 60% of the population has endured two or more entanglements.

BASCOMB: So, they're literally swimming through the water with all of this gear attached to them. It's very heavy, I can understand how it would be a real drain on their energy stores. To what extent are smaller whales less resilient over time? Or how is it affecting their ability to survive?

KNOWLTON: Well, the concern is that because they're smaller, they're not going to have as healthy of blubber reserves that a larger whale might have. And so, they would be less resilient to the impacts of climate change, for example. Also, if it's a reproductive female, we know that reproductive females use a lot of their blubber to support, a nursing calf. They nurse the calf for about at least a year. They're already in diminished blubber capacity, and then they lose that blubber through giving birth and lactating, then they are probably going to take longer to recover, to be able to build up the reserves to have another calf. We've probably lost some ability for these females to sort of be really productive females in the species in this population. It's a concern that needs to be considered as we try and keep the species from going extinct. There are certainly stressors that we can't address, such as food limitation and climate change. But the Right whales are dealing with that. We know that Right whales are pretty resilient and adaptable. And we've seen them adapting to changing food resources in recent years. But the entanglement threat and the vessel strikes that occur in the species are things that we could control much better than we've been doing. 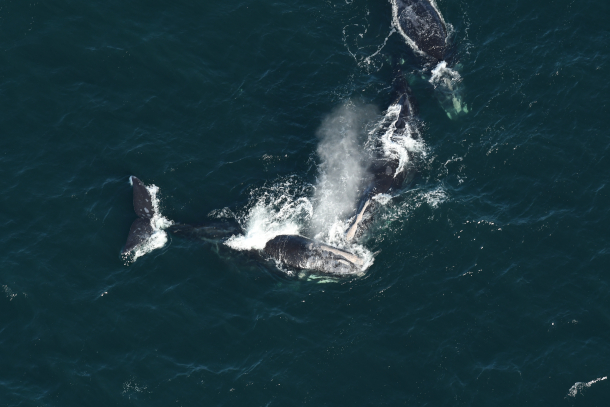 BASCOMB: That must be frustrating for you, as a biologist, to watch them adapt to one stressor that we've introduced, you know, the shifting habitats, if it's becoming too warm for them, in some places, they have to move north to find a more suitable habitat and the food that they need. But when they move north, they find all of this fishing gear that's entangling them and causing a whole new problem.

KNOWLTON: Yeah, it is a very frustrating situation to see. I mean, it's the entanglement threat has been there for decades. And it's certainly been exacerbated, partly because of climate change. But also, ropes have become much stronger in recent decades. Ideally, ropeless fishing gear would be the ultimate solution to this. And there's been a tremendous amount of progress on that front.

KNOWLTON: There's a few different designs being considered. But the general idea is to stow the end line and the buoy at the sea floor. When the vessel comes by and sends out an acoustic signal to that device on the sea floor, it releases that rope and buoy to the surface. 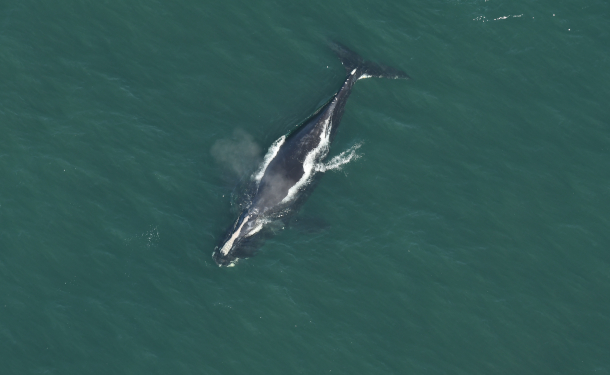 BASCOMB: How is that potential change being received by local fishermen? I would think you need buy in from them to implement some of these changes.

KNOWLTON: Yeah, I think there's definitely some concern about from fishermen about the cost. But I think that's hopefully if the more broadly, it's used, the costs will come down. And there's concern about whether it can be used effectively. But there again, there's been a lot of testing with various fishermen. You know, I think some fishermen are definitely willing to engage and to test the gear and try and make it work. And, you know, fishermen don't want to see whales die in their gear. You have to work with them to sort of figure out the quirks and sort out the changes that would improve that gear. And that's been what's been happening the past few years, and it's really encouraging to see that. Ideally what we've suggested at the aquarium is that you first phase it in high use areas where Right whales are known to aggregate or offshore waters where we know the gear is more risk to Right whales and then start phasing it in more broadly after that, because it's a big shift from how they fish now.

BASCOMB: So Amy, what can the average person listening right now do to help the Right whales? 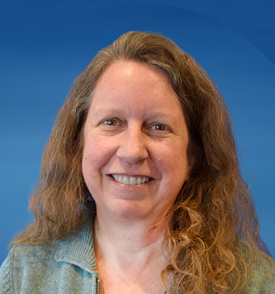 KNOWLTON: Well, there's a couple of things that people could do. First, if you're out on the water here on the east coast, and you happen to see a Right Whale, please report it to either the Coast Guard or to NOAA Fisheries. Or you can get an app for your phone called Whale Alert, and you can report sightings and photographs that way. You should remember that you're not allowed to approach Right whales closer than 500 yards, but you can still collect photographs and determine species from that distance. So please report sightings and operate carefully in the waters if you're out operating your vessel on the east coast. Make sure you are just very vigilant and keep your speeds as slow as you can and try and be careful there. And then if you're out eating seafood at a restaurant, perhaps ask where your seafood is coming from, whether it's been fished with whale-safe or whale-friendly gear. They might not know immediately, but at least they'll recognize that they need to pay attention to what their visitors are asking them to investigate. Those are a few things that people can really do to help support Right whales.

BASCOMB: Amy Knowlton is a senior scientist in the Right whale Research Program at the New England Aquarium. Amy, thank you so much for taking this time with me today.


Find the study in Current Biology