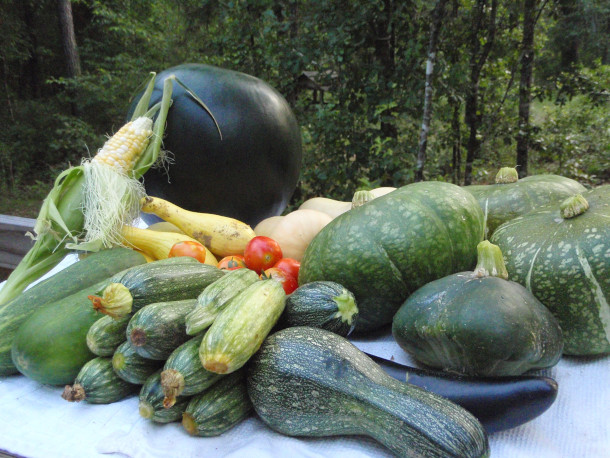 The Three Sisters is an agricultural strategy in which winter squash, corn, and climbing beans are planted in a mound to grow symbiotically. Together, this trio of staple crops used in many Native American tribes throughout history. (Photo: John S. Quarterman, Flickr, CC BY 2.0)

The Three Sisters are a trio of staple crops that have played a fundamental role in numerous Native American tribes throughout history. The corn, beans, and squash all grow together in a symbiotic planting relationship. Chef Steven Looney talks with Host Steve Curwood about the history and significance of these crops and suggests some recipes from his Chickasaw heritage.

CURWOOD: Well, Thanksgiving is just around the corner and if you want a vegetarian option or would like something beyond all the turkey, mashed potatoes, and stuffing, then we’ve got you covered. Three Sisters Stew is a Native American dish inspired by the three sisters of corn, squash, and beans traditionally grown together in many native gardens. Joining us now is Chef Steven Looney of the Aaimpa café at the Chickasaw Cultural Center in Sulfur, Oklahoma. Chef Steven, welcome to Living on Earth!

LOONEY: Thanks for having me, Stephen. It's wonderful being here.

CURWOOD: So when I was a kid, I went to the farm and wilderness camps where they taught us to farm by mounding up the earth, and putting corn seeds in and then putting bean seeds and squash seeds and had them all grow together. And we were told this was a Native American traditional way to grow food. And they call it something like the Three Sisters. So how did these three crops come to be planted together, Chef Steven?

LOONEY: So traditionally, Three Sisters is a symbiotic planting system. So what would happen is as the corn grows, it provides a stalk for the beans to trellis up to and give them root so they can actually continue to grow. And then from there, the beans would provide nitrogen for the soil for the squash and for the corn. So each plant helped the other plant grow and provided a nutrient that the other plant would have as a deficiency in the soil. So they back each other up like a family would.

CURWOOD: So it's getting to be colder now. And I'm thinking it might be fun to maybe have you tell me about a stew I could make? 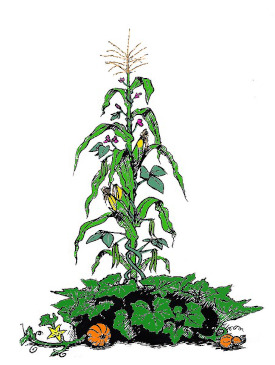 LOONEY: Absolutely. So one of the most amazing things about the Three Sisters is the corn, we have something called the pashofa. A pashofa is a white pearl hominy, that's been dried. So with that, I like to take the pashofa, slow cook it for about 16 hours with pork, usually pork butt. And then usually within the last hour and a half of the cooking process, I'll add black beans and generally yellow squash, but I really like to add butternut squash to it because it holds up a lot better. So you have this really intense corn flavor, balanced with the the fattiness and the saltiness of the pork. And then you have the sweetness of the butternut squash in there. And then you get these nice little hits of earthiness from the beans and it's a very complex and depth of a dish for you know something that's just you know, corn, beans and squash.

CURWOOD: Okay, Chef Steven, what about a simple vegan stew with the three sisters?

LOONEY: Oh, absolutely, absolutely. You could take all those exact same things. And just instead of using pork, you could add spinach to it, you could add kale to it. If you were apt enough, you could add wild greens such as poke to there, or ramps to it. Those are all things that can be foraged in Oklahoma or in the in the homelands that the tribe absolutely would have used and would've ate and consumed.

CURWOOD: So Chef Steven, let me ask you what's a simple recipe starting with corn kernels, say something vegetarian?

LOONEY: So you can have a corn potash, which is a type of corn soup. And you could just take fresh corn or canned corn if you like. If it's canned, you should strain it and remove all the excess water. And you can just simply sautee that up in a stock pot with some onions and garlic. Add some vegetable base to it or some plain water and then just reduce the heat. And then after it starts to simmer, you could add onions and carrots, you could add peppers and onions, potatoes. And then once that cooks for a couple hours on low, remove about half of it and then puree that and so it becomes its own cream. So this way you don't even have to add cream to the soup. The vegetables itself has become its own sauce basically. 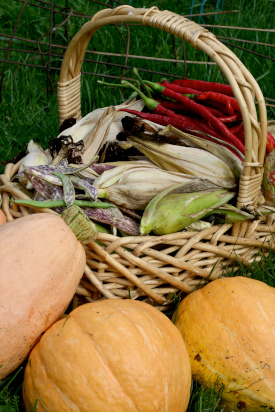 The Three Sisters planting strategy has been adopted by many home gardeners, who will often incorporate their other harvested produce into recipes that use the three sisters as a base. (Photo: Marguerite, Flickr, CC BY-NC 2.0)

CURWOOD: Mmm, so good. Of course, originally, these three foods were cultivated together. But nowadays, most people would find them in the produce section of a grocery store. What advice would you have for anyone who would like to adapt traditional recipes for today's kitchen?

LOONEY: You know, it's funny, growing up, you know, I wasn't really connected to my Chickasaw heritage as much as I am now. So to me, it's immensely surprising on how many foods are actually native foods. So, you know, all of our history is oral. So it's not like with French history, I can go get a cookbook from the 1500s and I can know what King Louis XV had, or what Marie Antoinette ate. You know, unfortunately my people, we share things orally. So a lot of it is just purely imagination based. Now, if you're really wanting to truly try foods that the tribe would have had, you know, you may not use obviously processed foods, you know, don't use, you know, all sorts of extracted oils like olive oil, palm seed oil, stuff like that. You can use lard, you know, if you have access to that, you can use that. But a lot of the foods would be considered what someone will say is humble, right? They didn't have necessarily special knives or special cooking equipment, you know, they smoked things, they boiled things, they dried things, they cured things like that. So a lot of what they ate is what some what some would say rustic you know, some would say humble. Someone say simple, but that's the type of food that my people ate.

CURWOOD: Steven Looney is chef at the Aaimpa Cafe at the Chickasaw Cultural Center there in Sulphur, Oklahoma. Steven, thanks so much for joining us today. I'm gonna try some of these in my own kitchen.

LOONEY: Well, I appreciate your time, Stephen. It's been a pleasure to be able to speak with you today.

NOTE: Chef Steven's remarks reflected his personal views. He did not speak on behalf of the Chickasaw Cultural Center or the Chickasaw Nation.