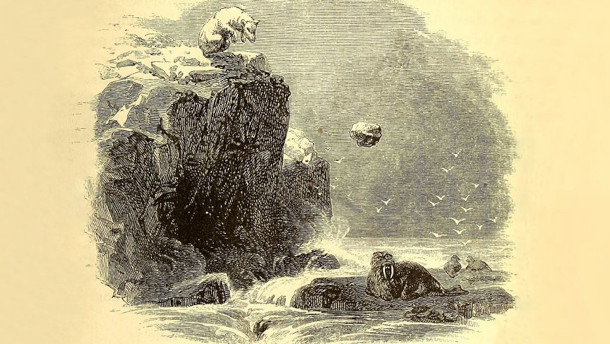 With large tusks and weighing over 2,000 pounds, walruses are a formidable foe for Arctic wildlife. But as Living on Earth’s Don Lyman reports, polar bears are utilizing tools such as ice blocks or large stones to hunt walruses as access to other food sources for the bears declines.

LYMAN: Weighing over 2,000 pounds, with large tusks and heavy skulls, walruses are a formidable arctic mammal. But research now suggests that polar bears may have found a way to kill the massive pinnipeds. For centuries, Inuit hunters in Greenland and the eastern Canadian Arctic have told stories about polar bears dropping large stones or blocks of ice onto walruses. Explorers and naturalists often dismissed these stories as myths. But the persistence of such stories, along with photos of a polar bear at a Japanese zoo using tools to obtain suspended meat, compelled biologists to investigate. Researchers reviewed historical and recent observations reported by Inuit hunters and non-Inuit researchers. They also looked at documented observations of polar bears and brown bears using tools in captivity to access food. The researchers concluded that “tool use in wild polar bears, though infrequent, does occur in the case of hunting walruses.” Tool use by animals to solve problems is generally regarded as a sign of higher intelligence, but studies on the cognitive abilities of polar bears are lacking. However, scientists say that a great deal of observational information suggests polar bears are very smart. Polar bears feed mainly on seals, which they hunt by looking for the seals’ breathing holes on sea ice. But climate change is melting Arctic Sea ice, so some scientists think that hungry polar bears may increasingly attack walruses for food. That’s this week’s note on emerging science. I’m Don Lyman.