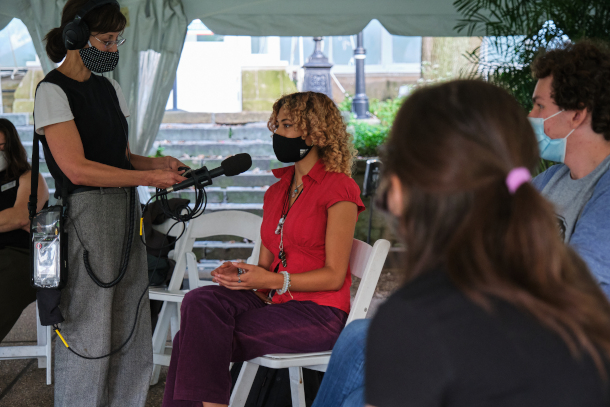 Climate change in the form of things like wildfires, floods, and droughts can have devastating effects on mental health. Now there is a growing consensus among therapists that these mounting challenges should be addressed. Julie Grant of The Allegheny Front explores how people in Pittsburgh, Pennsylvania and beyond are finding creative ways to tackle climate anxiety, often through community action and healing.

The National Aeronautics and Atmospheric Administration is now reporting that 2021 tied with 2018 as the sixth warmest year on record. NASA says taken together, the last eight years have been the hottest since modern record keeping began in 1880, with most of the increase of some 1.9 degrees Fahrenheit occurring since the 1950s.
Yet as temperatures keep rising from human activities many people are still slow walking action to halt this existential threat. And the visible warming effects of raging wildfires, melting glaciers and damaging storms are taking a toll on mental health, especially among young people. So some mental health clinicians are preparing now for the onslaught of need they see on the horizon. Julie Grant of the Allegheny Front has this story from Pittsburgh.

GRANT: A small group of high school students from around Pittsburgh have set up chairs in a circle on the patio outside of Phipps Conservatory. They're here because they're concerned about climate change, and they each have their own reasons.

KURTZ: My name is Malcolm Kurtz. I am a junior at Allderdice High School. I'm an avid hiker and birdwatcher, and I'm really concerned with how species are affected by climate change. 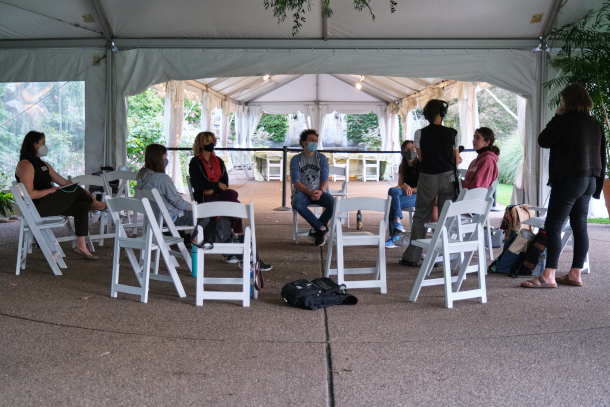 Members of Pittsburgh Youth for Climate Action gather at Phipps Conservatory and Botanical Gardens in Pittsburgh, Pennsylvania on October 4, 2021. (Photo: Njaimeh Njie for The Allegheny Front)

GRANT: These and other students gather monthly to talk and plan ways to work on the issue. I kind of expected to hear they were angry with adults, sad or depressed about the state of the planet. And they did express some of those feelings like Ava DiGiacomo, a sophomore at North Allegheny High School.

DIGACOMO: It's kind of like a helpless feeling, like this summer I started spending a lot more time outside. And there were moments when I would just sit and think this world is so beautiful, and it's slowly getting like ruined, and sometimes it feels like personally, I can't do anything that's really going to make a big change. And that's not an easy feeling to deal with.

GRANT: But these students are creating community around climate action, so they don't have to do it alone. On the evening we met, some had just attended a Climate March and the group had organized a bicycling event called Pedal-Topia. Rebecca Carter is a junior at Pittsburg CAPA.

CARTER: Things like Pedal-Topia where we can get together and do something in nature as a group and as a group of activists can be really helpful and cathartic.

GRANT: Psychiatrist Elizabeth Haase thinks students like this are on the right track. She's Chair of the American Psychiatric Association's climate change committee, and says feelings of eco-anxiety, of grief and longing for what's been lost in the environment, and worry about what will happen with climate change are all becoming more pervasive. She's among a growing group of mental health professionals pushing for more climate awareness among counselors. Haase says treating climate anxiety is not the same as clinical anxiety disorders.

GRANT: Haase compares it with treating someone with claustrophobia. She would encourage that person to face their fear and spend time in enclosed spaces, like a subway car. But that doesn't always make sense.

HAASE: That is not an appropriate response when the subway car is on fire. The subway is on fire. You don't want to sit there and let your fear wash over you, right? You want to start doing stuff.

GRANT: When her patients express concerns about natural disasters, climate change, and ecological collapse, she advises them to find ways to talk with their family and friends about it. And to take action: to join a climate group, write to their local congressperson, or pack up photographs and important belongings in an emergency backpack.

HAASE: Even just doing something like that gives you a greater sense of control, and it creates a safer space for you to be in when something bad is happening. 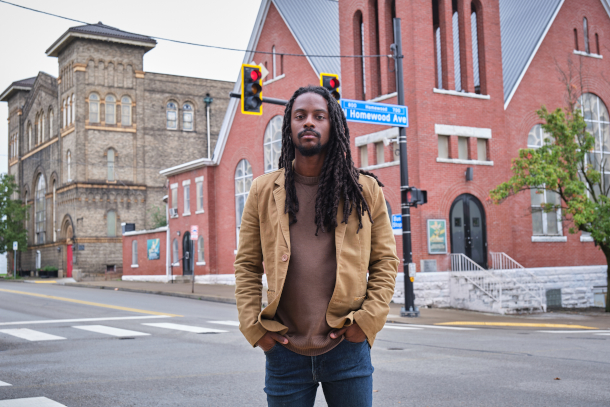 Walter Lewis, CEO of the Homewood Children’s Village in Pittsburgh, Pennsylvania says a few years ago he wouldn’t have connected climate change with the mental health of his organization’s clients. That’s starting to change. (Photo: Njaimeh Njie for The Allegheny Front)

GRANT: Psychiatrist Gary Belkin wants the mental health community to start taking action too, and quickly. He says there's already more mental health needs than there are available therapists, and climate change--the heat, droughts, and wildfires, and the general background stress it causes--is going to make that worse.

BELKIN: We really have to get good at rethinking how we can reach a ton of people across that spectrum. And the only way we're going to do that is by enlisting communities to be part of doing that.

GRANT: Belkin is a former deputy health commissioner of New York City and is now focused on the social aspects of climate change. He spearheaded a program in New York where mental health professionals trained employees at childcare centers, churches and programs for at-risk youth, places that he calls the front lines for mental health.

BELKIN: And we skilled those staff in screening for distress and illness, for basic counseling skills. We have to engineer things so you don't have to look for care or support, you trip over it.

GRANT: One group on the frontlines in Pittsburgh is starting to look into climate change and mental health: The Homewood Children's Village. President Walter Lewis says they have advocates who stay in touch with their 300 members. They focus on education, economics, food, and health, including mental health.

LEWIS: Probably three, four years ago for sure, it would have never dawned on me to think about some of the types of trauma, mental health impacts, of climate change.

GRANT: Disadvantaged communities like Homewood are expected to experience worse climate impacts than their wealthier neighbors. So even though his advocates are not mental health professionals, Lewis says he can still raise their awareness that a flood in the basement or some other climate-related event can be traumatic for clients.

LEWIS: Hey, you know, we just had a heatwave, you know, these are some things you might want to think about when you're talking to you know, your families or the children that you work with. 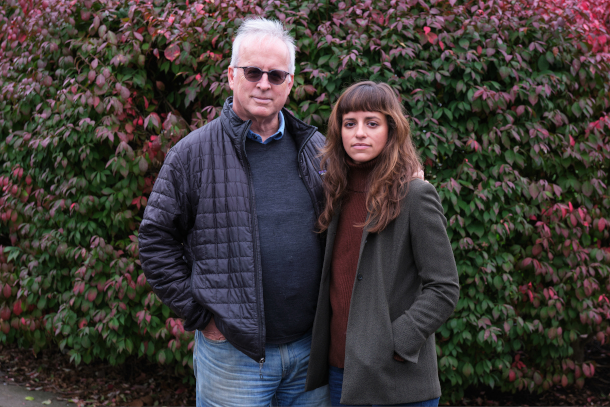 Dr. Kenneth Thompson and his daughter Alice Thompson are bringing a Brazilian-based community therapy technique to the U.S., starting in Pittsburgh, Pennsylvania. (Photo: Njaimeh Njie for The Allegheny Front)

GRANT: As the number of people reporting anxiety and stress around climate change grows, others in Pittsburgh are trying to expand the available mental health care.

EVANS: Hello, everyone! My name is Gloria Evans, and I am one of the certified facilitators for integrated community therapy. We want to welcome you tonight.

GRANT: This integrated community therapy facilitator is using a technique developed and practiced in Brazil for 27 years, to bring groups of people together to share their experiences, learn from each other, and gradually deal with problems in their families and neighborhoods.

THOMPSON: The goals of this method are to help people learn how to express themselves, sort of have emotional literacy, to how to talk about their feelings.

GRANT: Ken Thompson is a community psychiatrist based at the Squirrel Hill Health Center in Pittsburgh.

THOMPSON: Also how to help people develop a sense of empathy with each other.

GRANT: Facilitators are trained over months, not years. There are now around 40,000 facilitators in Brazil. Thompson's group is starting to train facilitators here. And as the climate changes, he says, people are going to need safe spaces like this where they can talk and connect with others.

THOMPSON: When you share that, it becomes a real powerful glue. And I feel like we need glue. We need a lot of glue in this society, you know, at least to keep us hanging together. 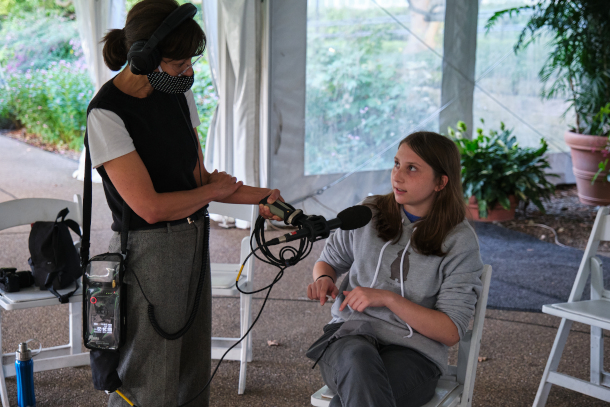 GRANT: In our polarized society, efforts like this are starting to help more people relearn how to talk with others and see their shared humanity and hopefully re-weave some of the community fabric that's been pulled apart. Because as climate change worsens, people are going to need each other.

CURWOOD: That story from Julie Grant of the Allegheny Front.

About Pittsburgh Youth for Climate Action (PYCA) from Communitopia