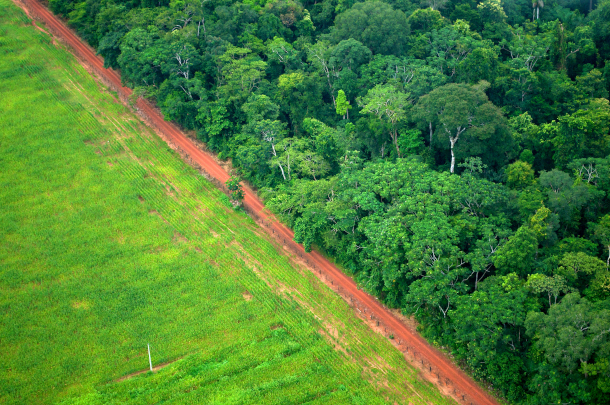 When someone takes a bite of a hamburger or tofu or has a cup of coffee or hot cocoa, it’s hard to know if those foods added to the destruction of tropical forests that are so key for biodiversity and climate stability. So as part of the European Union’s Green New Deal the EU is moving to ban the importation of of a half-dozen agricultural products from any newly deforested areas. Anke Schulmeister, a Senior Forest Policy Officer for the World Wildlife Fund, joins Host Steve Curwood to discuss this pending legislation.

When someone takes a bite of a hamburger or tofu or has a cup of coffee or chocolate bar it’s hard to know if those foods added to the destruction of tropical forests that are so key for biodiversity and climate stability. So as part of the European Union’s Green New Deal the EU is moving to ban the importation of certain agricultural products from any newly deforested areas. And they are starting with soy, beef, palm oil, wood, cocoa and coffee. The EU laws would compel purveyors to prove their products didn’t come from any newly deforested land. The proposed laws are projected to reduce greenhouse gas emissions by some 32 million tons a year and help the EU meet its goal of net zero emissions by 2050. It requires final approval by the European Parliament as well as each of the 27 EU member states. Joining us now from Belgium, which among other things is famous for its chocolate, is Anke Schulmeister a Senior Forest Policy Officer for the World Wildlife Fund. Welcome to Living on Earth Anke!

SCHULMEISTER: Yeah, welcome. And thank you for having me.

CURWOOD: Let's talk about chocolate for a moment. So right there in Belgium making amazing chocolate, which then gets sold with a nice Belgian label on it. How would this be enforced? How will people be able to understand that the cocoa that was used to make this chocolate came, in fact, from a place that's not being deforested, at least in contravention of this proposed set of regulations?

SCHULMEISTER: Yeah, I think this is a very good question. I think what this law is trying to do is that there is no choice for a consumer on whether the product is made with deforestation or not, it's just simply you're making sure that no matter which chocolate you buy, it is going to be free from deforestation. And to achieve that, there are measures in this legislation proposed that will ask a company to check down the whole supply chain. So, all of the people they buy from, you know, where do they buy it from knowing where the people are, and knowing in the end, where the origin of that is, and being assured that in that origin--so first the country and then the region, and then maybe even further down-- there has been no environmental impact. So negative environmental impact, neither human rights violation taking place. So, they would need to follow the laws of the country of origin. But also, in addition, make sure that the EU rules are followed. Because just to give you an example, for example, in Brazil, deforestation is still legal in certain aspects. And that means that you know, about 88 million hectares of forest could still be deforested. And what the EU at the moment is proposing is to say, even if the Brazilian law allows that, we in the EU do not want to buy this. So you know, no matter whether it's allowed, we will not accept any solid coming from these areas.

They call for Europe's reforestation and for saving our planet's lungs to slow down global carbon pollution.

CURWOOD: So beef is part of this, which of course, at the end of the day means leather. So let's say an American shoemaker, who has a contract with somebody in China is now selling that label in the European Union, once this rule goes into effect, what kind of challenge would they would they face?

SCHULMEISTER: This is a very good question, because that goes really much into the depth of it. So normally, what the commission has proposed is that you would need to know where it was produced no matter whether it came by China, or else. So if this American shoemaker would like to actually sell in Europe, he would need to get from his Chinese supplier information that tells him where he actually bought the leather. And then in the end where the cow was fed that produced that leather?

SCHULMEISTER: Yes and no. Because let's put it like this: we're asking something rather simple in stating, is there still land where there's forest or has this forest been converted to something else? And for this, there's a lot of satellite data these days available. So you know, it's very clear, very regularly updated. What is making it a bit more complicated is that there is a need for more transparency about your supply chains. So you need to be more open to where did I actually buy it from? And whom did I buy it from? Which we do think is a benefit. Because it makes it more transparent and more assuring for the consumer.

CURWOOD: So of course, at the end of the day, this is aimed at protecting our climate. What are the numbers? What kind of reductions in emissions, carbon emissions, do you think these rules, this legislation, will create?

SCHULMEISTER: So the European Commission, its impact assessment estimated that if there is no intervention, so if there's no law, there will still be about 248,000 hectares a year of deforestation, and about 110 million tons of C02 emitted until 2030 per year. And it's quite logic, because what are we talking about? We're talking about cutting down a forest and would make it into agricultural land. Which means that forests are not storing carbon anymore. The trees are potentially burned, you know, so it's quite an accumulation of CO2 that could be coming out of that. 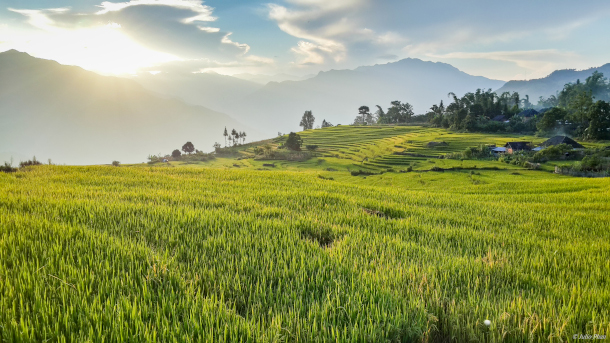 Fragile Cerrado grasslands and the Pantanal wetlands, both under threat from soy and beef exploitation, are not included in from a European Union draft anti-deforestation law. (Photo: Julio Phan, Flickr, CC BY-NC-ND 2.0)

CURWOOD: Okay, you're a forest policy expert. In your opinion, what is missing from this proposed set of rules and legislation by the European Commission?

SCHULMEISTER: So let me first say that we do think this is a very good start. I mean, we've been fighting for this, and we've been fighting hard for this for the last 10 years. So we think that European Commission is on the right track. But you know, what our plea would be now to the European member states and the parliament is that, you know, to close some of the gaps which we see. One is that for example, other ecosystems--savannas or grasslands--are not included from the beginning. We call actually savannas the inverted forests, meaning that their roots store nearly as much carbon as actually forests do, you know. On the landscape that they are they have such a dense root system, you know, that they really store a lot of carbon in there and that is then if it's converted to agricultural land lost. So there is going to be a review within two years time after the law enters into force to see whether they should be included. But it looks a bit like you know, if you would have a beautiful landscape photograph on your wall, and you have to cut out you know, about five square centimeters of that photo and there's this blank spot this is where the savannas or others were. So you still have the forest, but the rest is missing. And I think, you know, we think this is an omission because we are importing a lot from those areas as well. That's the one thing. It is not very strong on human rights violations or actually ensuring that there are no human rights violations. So this needs to be looked into. And though we do really appreciate that it is targeting companies and sets some strict rules for them, it is not addressing the finance sector. And EMA, that's also missing a bit if we have the companies who are doing the works in those regions, but not those banks or finance sectors, which are funding those companies. And I think we think this also needs to be addressed. And what for us is important is that this law applies the same to all companies so that we do not make a differentiation between sourcing from a high-risk region--so where there's a high risk of deforestation--or a so-called low risk region. We do think that you know, every company should be treated the same. And even if a company is sourcing from a high-risk region, there can be companies who have a good traceability and a good transparency. So they should all have the same rules and there should be a level playing field for them all.

CURWOOD: Okay, Schulmeister is the senior forest policy officer for WWF. Thanks so much for taking the time with us today.

SCHULMEISTER: Well, thank you very much for having me and have a great day.

The Guardian: EU aims to curb deforestation with beef and coffee import ban