Culture of the Congo Peatlands 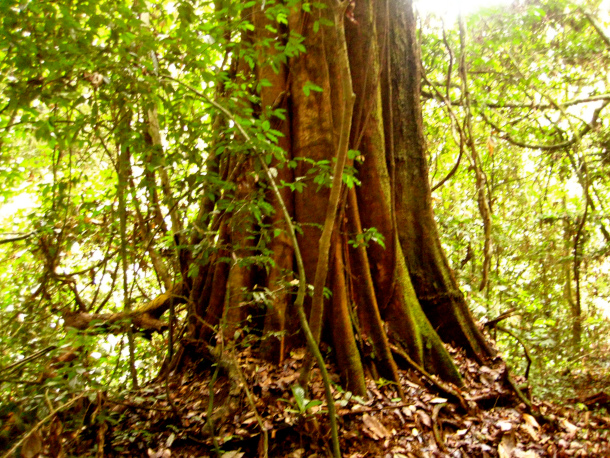 The Congo basin is home to numerous endemic plant and tree species but there are timber concessions around the region that could potentially pose a threat to the health of the ecosystem. (Photo: Corinne Staley, Flickr, CC BY-NC 2.0)

Western scientists only learned about the Congo Basin peatlands in 2017 but indigenous communities have avoided disturbing the peatland while sustainably hunting and fishing in the area for generations. Raoul Monsembula grew up in the area and now works with Greenpeace Africa. He spoke with host Bobby Bascomb for a local perspective on the region.

BASCOMB: Well, the peatlands of the Congo were brought to Western attention by a team of Congolese and British scientists in 2017. But indigenous communities have known about the region for generations and have a long history of sustainably using the peatlands for hunting, fishing, and for medicinal plants. For a local perspective, I’m joined now by Raoul Monsembula, a scientist who grew up in the Congo Basin and now works as the Central Africa Regional Coordinator for Greenpeace Africa. He’s also a biology professor at the University of Kinshasa and worked with researchers from the University of Leeds to map out and document the Congo peatlands. Raoul, welcome to Living on Earth!

MONSEMBULA: Thanks for inviting me.

BASCOMB: So this area is new to the western world but, of course, local people have known about it for generations. Can you tell me a bit about your relationship with the peatlands and how the communities surrounding it used the area?

MONSEMBULA (VOICEOVER): The elders said to us it was a productive area for the fish and animals, and we could only do seasonal fishing and hunting, and collect some firewood because it's a fragile area, where the fish and animals reproduce. We only use it during the dry season. We don't go there during the wet season when the animals are reproducing.

We were advised by our elders to never start a fire in these areas, because these areas were essential for food. It’s also an area where we practiced traditional ceremonies.

And you don’t see a lot of hospitals here but you don’t see people dying a lot because they’re using medicinal trees from the peatland and eating forest fruit.

BASCOMB: So as a scientist from the DRC who grew up there, you spent your life in this region, how surprised were you to learn about the enormous amount of carbon locked up in the soil there?

MONSEMBULA: When the scientists came here and we learned about the peatland, that night it was one of the biggest celebrations I’ve ever had in my life, we danced and we drank with the villagers because even if we didn’t know about the peatlands for a long time we knew that they were special. Even as we now begin to scientifically understand what this area means, the elders knew for a long time that this area would benefit humanity. This discovery made us very happy even if we were unsure if carbon would have any financial significance or not! It’s as though we are helping the world fight against climate change.

BASCOMB: So it sounds to me like the local people who live there have a really really invested interest in keeping this place intact and keeping it just as it is to continue to use it in so many different ways.

MONSEMBULA: The problem is in Indonesia they are growing a lot of rice and palm oil crops in the peatlands, so the youth think why not grow them here too because it's easy money. Most of the young people, the ones who are less than 25 years old, some of whom are unemployed or not well educated, want to do things like that.

BASCOMB: Well you know the Congo Basin, the rain forest there, is second only to the Amazon of course in terms of being the largest rainforest in the world but unlike Brazil the Congo basin hasn’t really seen a whole lot of development but what are you seeing on the horizon in terms of possible development and threats to the integrity of the peatlands?

MONSEMBULA: Logging is nearing the peatlands and agribusiness is growing. And the growing population can be problematic because it will encourage the development of more rice crops or palm oil crops in the peatland.

That can be a problem because with a larger population if people can’t make a living, send their kids to school or go to the hospital they will damage the peatland by logging ecologically valuable trees to sell the wood and once they do that the peatland can dry.

BASCOMB: Well that’s the thing I mean, you know, here in the United States and so many other Western countries we developed, we cut down our forests to grow food, to send our children to school, to do all the things that you’re talking about that any person has these needs, right. But, of course, the Congo basin now is sitting on this treasure, this world treasure and we need it to stay intact to maintain our climate but it’s very hard I think for Western cultures to say no no you shouldn’t do that, when we did it ourselves. So how can the Western world, do you think, support people living in the Congo Basin to preserve this thing that’s so important for all of us but at the same time support the people that need development?

MONSEMBULA: The problem is that we need donors. We need western countries who are creating a lot of pollution to give some money for peatland protection. But another thing is corruption. You know how bad governance is in Central Africa. Like right now in the DRC we are hearing about millions of dollars going to the Central Africa Forest Initiative, they are giving a lot of money but when you’re in the field you don't see anything. There is now a very big forest community project which is funded by international NGOs like Greenpeace, not the DRC government. We don’t want people to donate through the government ministry. With the corruption and bad governance that money will not go to the field.

BASCOMB: Raoul Monsembula is the regional coordinator for Greenpeace Africa. Raoul thank you so much for taking this time with me today.

MONSEMBULA: Thank you for inviting me.

BASCOMB: We want to take a moment to thank Oscar Fierro for his help with the translation of this segment and Mark Fabian for doing the voice over.


National Geographic | “Inside the Search for Africa’s Carbon Time Bomb”

Learn more about Greenpeace Africa’s work in the Congo rainforest