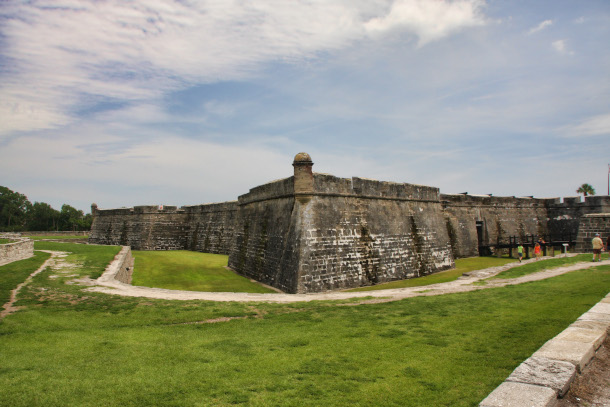 The Castillo de San Marcos is one of the major heritage sites in St. Augustine, Florida. It is made of coquina, a stone composed of soft, porous shells, which is a weak barrier against water. (Photo: Evangelio Gonzalez MD, Flickr, CC BY-NC-ND 2.0.

Rising sea levels along coastal Florida threaten to erode thousands of years of human history at valuable archeological sites. Among the threatened structures is the Castillo de San Marcos, a historic fort built by the Spanish in 1672. Brendan Rivers of WJCT News 89.9 in Jacksonville reports on efforts to document the shoreline and implications for the local tourism industry and other heritage sites around the world.

CURWOOD: Even when sea level rises just inches the effect on low lying shorelines can be felt hundreds or more feet away from the water’s edge. And perhaps no place is more vulnerable than the Florida peninsula, where much of the land along its coastline is mere feet above the seas. Brendan Rivers of WJCT News 89.9 in Jacksonville, Florida has the story of how some archaeologists are racing against time and ocean to document and protect important historic sites.

RIVERS: Archeologist Emily Jane Murray is working at a site called Shell Bluff Landing in St. Johns County. You’d never guess by looking at it, but she says this wooded area on the Tolomato River has seen thousands of years of human history.
MURRAY: I’m always amazed, every time I come, just how much higher the tide seems at this site.

RIVERS: Murray’s mapping the shoreline to track how water levels have changed… part of a project looking at how climate change is threatening, and in many cases already harming archaeological sites. There’s a well here that was built in the 1800s. Today the river is lapping at its base. but aerial pictures from the 1940s show a hundred feet of shoreline separating it from the water.

MURRAY: It's the Intracoastal Waterway, so a lot of this has been heavily modified and dredged and maintained for navigability. So that's definitely affected the shoreline. And it could have been even further out back in the 1800s when the wall was put in.

RIVERS: A similar story is playing out 10 miles south at the iconic Castillo de San Marcos in historic Downtown St. Augustine. The Spanish built the fort in 1672, making it the city’s oldest building. Steven Roberts with the National Park Service says Downtown floods on a nearly monthly basis during high tides and that’s only going to happen more often as seas rise due to climate change. 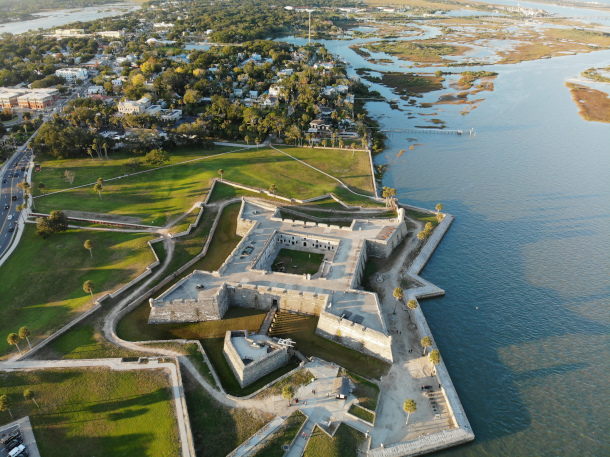 ROBERTS: As the parking lot floods, it becomes harder and harder for visitors to get to the fort and obviously we see less visitation on those days.

RIVERS: That’s a big deal because the main economic driver here is heritage tourism — people visiting historic places — and the Castillo is the main attraction, bringing in about 800-thousand visitors  — who spend an estimated 40 million dollars a year. The Castillo’s walls are coquina, a stone made of compressed shells that’s soft and porous. Those are good qualities when facing cannon fire but not so much when it comes to water. Roberts says the absorbent coquina could compromise the fort’s integrity as climate scientists predict seas could rise about 3 feet in the next 50 years.
ROBERTS: Now that might not seem like a lot, but what it would do is it would overtop some of our sea walls, it would add water to our dry moat, and that water over time continuing to press against the soft coquina stone, could definitely weaken the foundation and over time erode the foundation, as well as the walls of the Castillo.

RIVERS: Floodwaters could reach the structure multiple times per year by mid-century, up from today’s average of less than once a year, Climate Central data show. Recognizing the risk, the city of St. Augustine is taking steps to fight back the rising tides. The Old City has just 15-thousand or so residents and an annual budget of just 60 million dollars, but since 2016, they’ve spent tens of millions on preventing floods. They’ve raised sea walls, retrofitted drainage systems and raised structure with other projects in the works. And earlier this year, the city named engineer Jessica Beach as Chief Resilience Officer.

BEACH: I think having the historical resources within our city, that's all the more reason for us to be aggressive with this and do what we can

RIVERS: But all of these projects probably won’t be enough if climate change continues unabated. With that possible outcome in mind, the National Park Service is turning to the Center for Digital Heritage at the University of South Florida. 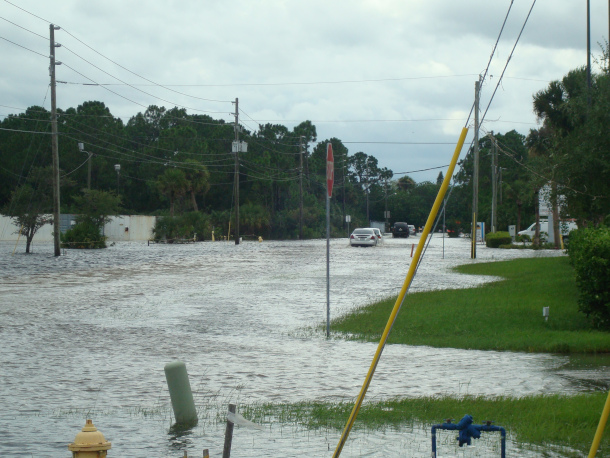 COLLINS: We use a series of different types of digital strategies to document and record cultural heritage locations.

COLLINS: So we can do things like replicate, fabricate and present things in virtual reality that are very realistic, present things in augmented reality for the classroom to let people kind of explore and engage right in their own classroom. And then we're doing things with imaging where we're creating virtual tours for the parks.

RIVERS: For archeologist Emily Jane Murray, artifacts are tied to their original locations. So losing a site means losing a big chunk of history.

MURRAY: I think about climate change impacts too. If this is what’s happening to the places where people used to live now, what's coming for the places where we live? Because it's not slowing down. These impacts are just kind of gonna snowball.

RIVERS: Murray compares it to the famous fire at the Library of Alexandria: flooding caused by fossil fuel pollution is threatening to destroy historic resources along the coast, leaving archeologists scrambling to learn as much as possible before they’re lost.

CURWOOD: That story was reported by Brendan Rivers of WJCT News 89.9 in Jacksonville.