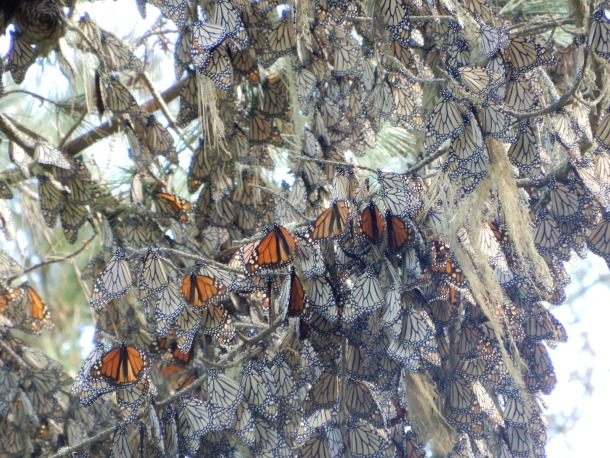 In a cluster of butterflies about a dozen Western Monarchs sit high up flapping their wings in the Pacific Grove Monarch Butterfly Sanctuary (Photo: Candy Sarinkonda, Flickr, CC BY 2.0)

The population of Western Monarch butterflies has increased by more than 100-fold this year after reaching an all-time low last year of just 2,000 individuals. Executive Director of The Xerces Society for Invertebrate Conservation, Scott Hoffman Black joins Host Bobby Bascomb to talk about the potential explanations for the comeback.

BASCOMB: Western Monarch Butterflies, those that live West of the Rocky Mountains, were once common. Upwards of 10 million migrated on the west coast as recently as the 90s. But they’ve faced a precipitous decline since then attributed to habitat loss and pesticides. In 2021 volunteers were able to count just 2,000 Western Monarchs. Biologists feared extinction was on the horizon but this year more than 250,000 western monarchs were counted, that’s a 100 fold increase. It’s still a far cry from their historical numbers but ecologists like Scott Hoffman Black are encouraged. Scott is the Executive Director of the Xerces Society in Portland, Oregon. He says there are a lot of factors that could account for the recent rebound of Western Monarchs.

HOFFMAN: Yeah, so we don't have all the answers for why the big increase this year, and we're really still trying to tease out the reasons. As a colleague named Louis Yang, who's a professor at University of California, Davis said, it's likely because of what he called a series of fortunate events. Monarchs had the right weather conditions for likely exceptional breeding and for successional migration back to overwintering sites. One thing we need to remember about monarchs is they're not like place based animals. In the West, they overwinter along the coast. And then the first generation flies out to find host plants and nectar sources, and likely lays their eggs on milkweed, their only host plant, somewhere in the coast range or the Central Valley. Then those caterpillars grow up turn into butterflies, they might fly to Nevada, they might fly to Southern Oregon. This happens over three or four times to where monarchs might be in Utah or Southern Idaho or Arizona or Nevada, then that last generation makes it all the way back. It's quite epic when you think about it. So, but they found good breeding, they found a way to successfully migrate. And what that means is, they were able to capitalize on enough of the resources that they need. And that's milkweed, and nectar sources. So we think a lot of this had to do with weather. But that's because they had the resources still in the environment to use. Now, there are some other ideas out there, we might have had more migrants from the eastern monarch population, the Eastern monarch population is much bigger than the Western, or some resident monarchs that seemed to be in California, year round might have been playing a role. But we likely think it's mostly great weather and being able to capitalize on on these resources for both breeding and migration.

BASCOMB: Now, of course, monarchs are pollinators and an important food source for many different species, despite the fact that they're somewhat poisonous. How did this dramatic increase affect the greater ecosystem? And then, of course, the reverse of that question, if we were to lose Western monarchs altogether, how might that impact the local ecology?

HOFFMAN: Yeah, I think it is important to have an animal like monarchs in the landscape, who you can imagine they are eaten by birds, they're eaten by rodents, they do incidental pollination. They are also herbivores and they eat plants and so their poop is really readily available fertilizer. So they're really, really important. And you can imagine going from millions of monarchs to just a few thousand that, that would have big up and down impacts on our ecosystems. And I will also point out that I think the issue with monarchs is a little bit like the canary in the coal mine as well, in that when we see declines in a ubiquitous animal like that, we're also mirroring those declines in animals we don't really notice and insects generally beyond monarchs are really driving our systems. If you like fish in our streams, you should like an insect, if you like birds in your backyard over 90% of songbirds feed their young insects. If you like pollination, if you like natural ecosystems that have seeds to continue to thrive, you think pollinators, and if you like to eat you also think pollinators. So monarchs are important but I think the bigger issue that when we see something like this happening to monarchs, we know that this is an issue that is affecting a lot of other insects and that could eventually be catastrophic for ecosystems as well as the humans that rely on them.

BASCOMB: Well, now that Western monarchs are starting to rebound, what can we do to support them and encourage more population growth?

HOFFMAN: So number one, the monarch butterfly deserves full protection under the Endangered Species Act. This is an animal that in the East has declined by 70% to 80%. In the West, even with this year's uptick it has declined by 95%. And the US Fish and Wildlife Service found that the entire population East and West deserved protection under the Endangered Species Act, but that they were precluded for higher priority actions. 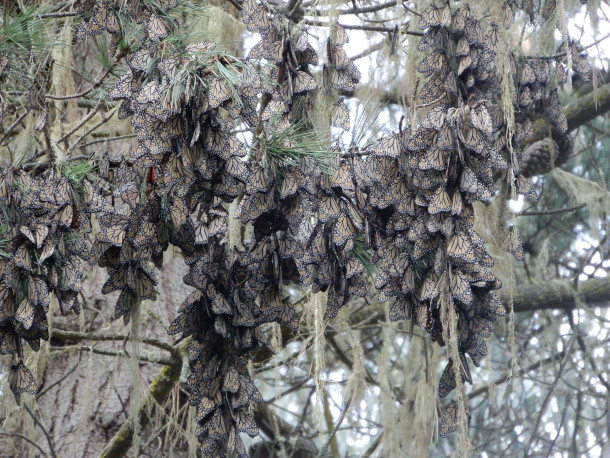 HOFFMAN: Well, it means that they don't have the money to list all of the species in their portfolio. So they've punted this to likely 2024 when they'll make a decision likely to finally list the monarch, but we'd like them to move faster. But on the individual scale, the neat thing about monarchs is that anybody can take action. If you live in a town or a city or a farmer, or manage a park or manage a National Forest, you can ensure that we've got habitat for these animals. That means native milkweed that these animals can lay their eggs on and that the caterpillars can eat to become an adult monarch. We also need to plant lots of native nectar sources, lots of native flowers. Monarchs as you might imagine, whether they're in the east or west, they're traveling hundreds, if not thousands of miles and they need a lot of energy to do that. And so we need to maximize the amount of flowers out there. Also, we really need to take action on pesticides. If you you know, have a yard, just stop using pesticides, you don't need pesticides in your yard. If you're a farmer, we can use pesticides in a more thoughtful manner to grow food that is healthy for both humans and healthy for the environment. So it's the one thing about insects in general, you know, I get to talk about bees and butterflies and other insects and the neat thing about it is we need to be pushing to protect polar bears and wolves, but not everybody can take individual action. And in this case, everybody can take individual action to protect these animals.

BASCOMB: Scott Hoffman Black is a conservationist and Executive Director with the Xerces Society. Scott, thanks for taking this time with me today.

HOFFMAN: Thank you so much for having me.

Xerces "Bring Back the Pollinators"