The Sounds of Mars

The first successful Mars lander was Viking 1 in 1976, and now, after dozens of missions NASA has finally captured the first ever audio recorded on the surface of the red planet. Host Aynsley O'Neill shares these recordings with Host Bobby Bascomb and explains how Mars' atmosphere alters sound compared to how we experience it here on Earth.

O’NEILL: So, Bobby most of our stories here feature sounds from Earth but I’ve been listening to some really out of this world recordings lately.

BASCOMB: Oh, really? What do you mean, Aynsley?

O’NEILL: Well, NASA spacecraft first landed on Mars with the Viking 1 in 1975. And finally, now after almost 50 years and dozens of missions, the Perseverance rover has recorded the first sounds ever captured on the surface of the red planet.

BASCOMB: Oh, wow, so what does Mars sound like?

O’NEILL: Well, I wasn’t sure what I should be expecting at first – my original impression of what Mars could sound like was based on Ridley Scott’s movie adaptation of The Martian.

LEWIS: Visibility is almost zero. Anyone gets lost, home in on my suit's telemetry. You ready?

WATNEY: Commander? Are you okay?

CURWOOD: So I’m gonna guess that’s not quite what NASA’s audio sounds like.

O’NEILL: No, not exactly. For one, there’s no sweeping movie score to accompany it. Actually, in the first raw audio captured from Mars, most of what you can hear is just the humming of the Perseverance rover. That’s where the microphone is mounted.

O’NEILL: But with a little audio filtering, NASA dialed back those rover sounds, and the wind from the planet comes through a little stronger.

O’NEILL: There’s also the sound of the Perseverance rover rolling across the Jezero Crater just a few Martian weeks into its mission.

O’NEILL: And for the first time, a spacecraft on another planet recorded the sounds of a separate spacecraft when Perseverance used one of its microphones to listen to the Ingenuity helicopter during its fourth flight on Mars.

BASCOMB: Now, Mars has a different atmosphere than Earth, so that’s sure to alter how sound waves move, right? 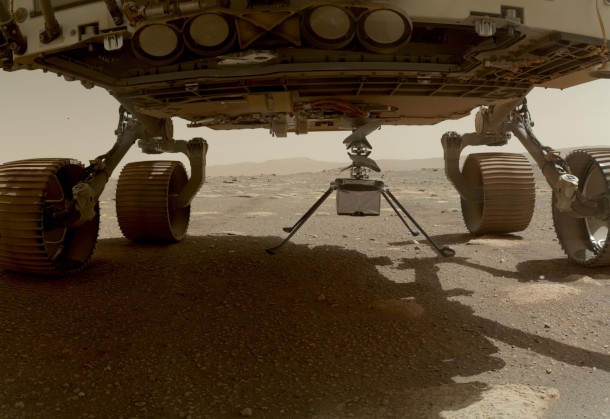 In this photo, the Ingenuity helicopter is deployed from underneath the Perseverance rover. (Photo: NASA, public domain)

O’NEILL: Yeah, the atmosphere of Mars is roughly 96% carbon-dioxide, and those molecules absorb a lot of higher pitched sounds, so only low pitch sounds would be able to travel long distances on the red planet. So, the sounds of some city birds here on Earth

get lost on Mars.

O’NEILL: Also, because the atmosphere is around 100 times less dense than Earth, there are fewer atoms for the sound waves to vibrate through, so volume would be quite a bit softer than here on Earth. The sharp sound of a bike bell

gets muffled on the red planet.

BASCOMB: Wow, that’s cold – what does that do to the sound?

BASCOMB: So, any person on Mars would have to be in a space suit to breathe, of course, but let’s just imagine that two people were able to talk to each other – what would that sound like?

O’NEILL: Well, that would depend on the distance between the two people, but overall, sound would be quieter, and it would take those people a little bit longer to hear each other.

BASCOMB: So, on an alien planet, we would even sound a little alien. 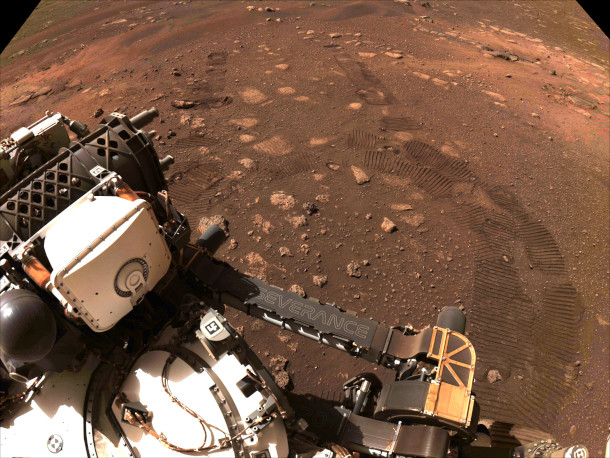 The Perseverance rover is now moving up the slope of the Jezero crater, looking for new rock samples. (Photo: NASA, public domain)

O’NEILL: Yep, and NASA even has a tool that will allow you to filter your own Earth audio, so you can hear what it would sound like on Mars.

For example, let’s wrap up by listening to a familiar song. Maybe the Living on Earth theme tune?

BASCOMB: Sure, go for it!

O’NEILL: The Perseverance Rover is now beginning a new stage of its mission, rolling up the slope of the Jezero crater to collect a group of rock samples that scientists are hoping might contain hints of ancient life on the planet’s surface.