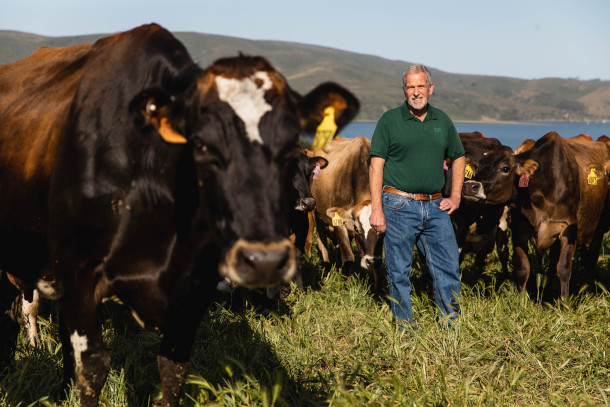 Roughly one third of US methane emissions comes from livestock, mostly cattle. Albert Straus of Straus Family Creamery joins host Bobby Bascomb to talk about how he reduced methane emissions on his farm by participating in a trial experiment to feeding a seaweed supplement to his cows.

CURWOOD: In the U.S., more than a third of our methane emissions come from livestock, mostly from cattle. Methane is short lived in our atmosphere, lasting only about a decade, but it is roughly 85 times more potent than carbon dioxide as a greenhouse gas when it’s first emitted. For years, a few farms have reduced methane emissions from manure with methane digesters, which process the dung into green energy. And now scientists and dairy operators are trying out ways to limit methane from the other end, the bovine belches. It turns out that feeding cows a small amount of seaweed can help dramatically. For more, Living on Earth’s Bobby Bascomb spoke with Albert Straus, Founder and CEO of Straus Family Creamery in Marshall, California, who says seaweed holds great promise for his small enterprise.

STRAUS: We've been trying to sustain small scale family farms. In the United States in 1940, we had 4.6 million dairy farms. Today, we have under 30,000 dairy farms left and they only expect 20,000 to survive next decade. Our average dairy is 250 cows, whereas nationally, I think it's probably 1000s of cows now. And so it's better for the soil, air quality, water quality, and the planet to have small scale dairy farms. So you have local food systems rather than national or international food systems.

BASCOMB: Now, I understand that you recently participated in a USDA approved trial with Blue Ocean Barns where you tested incorporating a small amount of seaweed into the diet for your cows.

STRAUS: Yes. So four years ago, we saw in the newspaper an article that they were testing this one specific variety of red seaweed in Australia and Canada. And when we found out that UC Davis was gonna be doing trials on it, we collaborated with them with the intention of being the first commercial trial. So Blue Ocean Barns evolved out of that UC Davis trial. It's a for-profit that's growing this specific variety of red seaweed in Hawaii - in tanks so that it's not depleting our oceans - and it will be certified organic, so that we can use it on our farm and all the farms that are certified organic in our area. Last summer, we concluded our trial, it was the longest and largest trial that had been performed in the United States and perhaps the world. 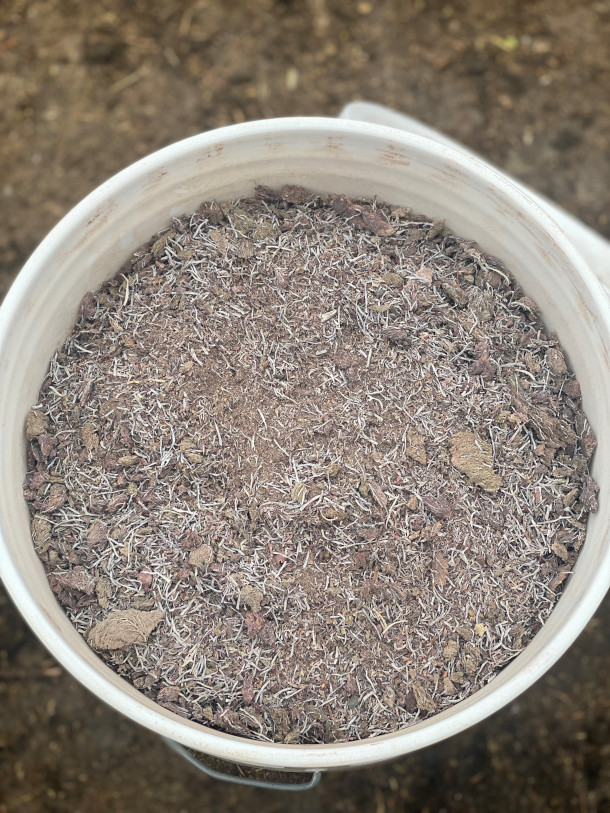 Blue Ocean Barns supplied the seaweed for the first commercial trial. They grow seaweed in tanks in Hawaii in order to not deplete ocean ecosystems. (Photo: Courtesy of Straus Family Creamery)

BASCOMB: Can you tell us more about that? Why seaweed? And how is it actually supposed to help with the methane that cows released from belching?

STRAUS: This specific variety of red seaweed has a chemical called bromoform that reacts with the bacteria in the stomach of the cow, the rumen of the cow. Instead of the bacteria giving off methane, they give off hydrogen. And it also has some benefits of making the cows more efficient on how much feed they have to eat versus how much milk they produce.

BASCOMB: And it's healthy enough for the cows, it's not damaging to them in any way?

STRAUS: No, the tests show that there was no ill effects on the cows.

BASCOMB: So you mentioned it's grown in tanks so it's not depleting the ocean of its seaweed resources. And I understand that it's also dried before you give it to the cows. How did the cows like it? Do they seem to eat it readily?

STRAUS: Yes, I think the original trial took a little bit of time to get it situated properly. But yeah, the cows took to it. We're looking at how we can make it palatable and something that we can deliver in different feeding systems to cows. So that's what we're gonna be working on this year.

BASCOMB: So what were the results of your trial feeding seaweed your cows?

STRAUS: There were 24 cows under a treatment group, 24 cows in a control group, it went for 50 days, and by feeding one quarter pound in our 45 pound ration, we were able to get a 52% average reduction in methane emissions with a couple cows over 85% and one at 92% reduction. So it was a very successful trial. There was no residuals of any chemicals. And the state of California subsequently approved the use of it as a feed supplement.

BASCOMB: How do you measure the methane emissions coming out of an individual cow? I'm imagining, you know, like a mask or something on Bessie. How did you manage that?

STRAUS: They're called green feeds, they're a machine where the cows go into a stall two to three times a day, they're incentivized with a little bit of grain, and it measures the emissions coming from the belches from the cows and analyzes it on site. And then it was transmitted to the Cloud where the researchers could collect the data and compile it.

BASCOMB: And what about the milk from these seaweed-fed cows? How does it taste? Can you tell any difference?

STRAUS: That was one concern of mine, was that if the milk didn't taste good, or you know, very similar to the milk that we produce, it was gonna be a non-starter. And we did a blind taste test with our staff at the Creamery and there was no difference in the taste of the milk. So we were very pleased by that. 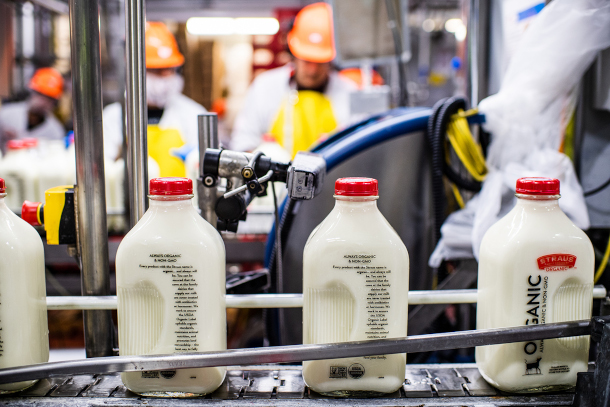 The milk from seaweed-fed cows tasted no different from that of regular-feed cows when tried in a blind taste test. (Photo: Courtesy of Straus Family Creamery)

BASCOMB: So you know, in the US alone, we have on the scale of 94 million cows to feed. How realistic is it, do you think, to scale up production of seaweed for all those cows?

STRAUS: I think we'll have enough in the next couple of years to feed all our cows on our farm. And I think the goal is to have enough to feed 50 to 100,000 cows just from this one company Blue Ocean Barns. As it scales, and as we put priority and resources against it, we will meet those needs.

BASCOMB: Well, you know, we've known about this problem of methane from cows for quite a long time now. And another solution that people have looked into is methane digesters. We've been talking here about methane from belching, which the seaweed is supposed to address, but the manure also contains quite a lot of methane. The idea behind a digester is that you heat it to a very high temperature and it makes electricity, basically. I understand that you've already invested in methane digesters on your farm. How's that working out for you?

STRAUS: We installed the digester 18 years ago, and we've been producing all the electricity for our farm for the last 18 years, and we are selling our carbon credits to the market and creating an alternative income source. So we're taking a greenhouse gas out of the atmosphere that's 84 times more detrimental than carbon dioxide and creating a resource. It's not only beneficial to the environment, it's beneficial economically for farms as well.

BASCOMB: Well, that's the thing, you know, how do the economics work out? Especially if a farmer is listening to this and maybe wants to try something along these lines, I would think there's got to be a pretty big startup cost. How did you manage that? And what do you see as the return on the investment, you know, how long did it take for you to start breaking even or even making money from this?

STRAUS: Originally, the cost was about $350,000, of which we got $140,000 of grant money. And we're offsetting 40 to $50,000 a year in energy costs, electric costs, so it had a four to five year payback. Likewise, we've just done a trial on a small scale digester for small scale dairy farms that will have less than a five year payback, use a revolving fund rather than having farmers go into debt, and have a company build and operate these digesters so the farm doesn't have to take their resources and labor. 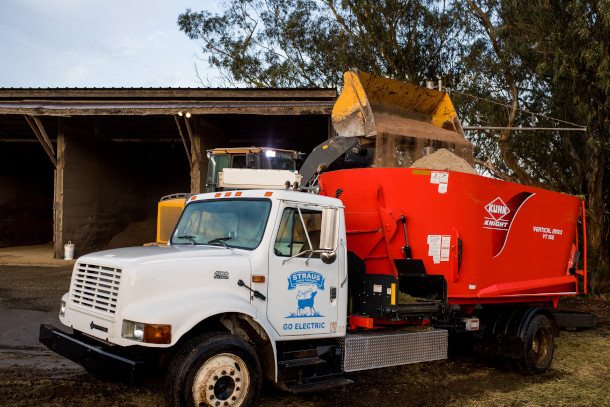 BASCOMB: You know, a lot of people are looking to reduce their consumption of dairy and meat as a way to reduce personal greenhouse gas emissions. As a farmer, what is your take on that? Are animal products and climate solutions mutually exclusive?

STRAUS: For me, my belief is that animals have an essential role in reversing climate change. I've been all around the world supporting small scale farmers and animals are part of a farming system, in balance with plant based food as well, but it's a balance, it's not an extreme. So I think it's how do you make a farming system that balances these different environmental needs as well as producing healthy food for local consumers? Bringing plant based foods from around the world is not good for the environment either. And the United States, we're importing half our fruit, a third of our vegetables, 80% of our lamb, 90% of our seafood, 11% of our beef, it's not sustainable for our local communities or our planet.

BASCOMB: Albert Straus is the founder and CEO of Straus Family Creamery in Marshall, California. Albert, thanks so much for your time today.

STRAUS: Thank you for allowing me to be on this show.