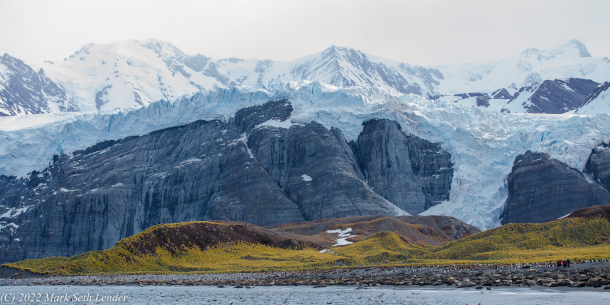 An elephant seal could easily crush most any bird but Living on Earth’s Explorer in Residence, Mark Seth Lender, watches as one instead gives repeated warnings to two irritating petrels.

CURWOOD: Many animals will give warning signals before they inflict any harm. Think of a dog’s growl, the false charge of an elephant, a rattle snake’s rattle. Living on Earth’s Explorer in Residence, Mark Seth Lender, shares this story of an Elephant Seal giving a warning to a nuisance bird.

At Gold Harbor on South Georgia island, a primal scene unfolds. There, instead of the Pandemonium he expected, Explorer in Residence Mark Seth Lender found an abiding morality, and restraint.

The full length of the cove out to the vanishing point where the beach meets the wall of the headland and from the water’s edge inshore toward where the grasses grow in tufts, here in this expanse a great herd of elephant seals abides. They snort and roar. Their flippers scoop and fling arcs of sand onto their unprotected backs; it sounds like dry rain, this their sole concession to the omnipresent sun. Incessantly they complain though crowded in upon each other by choice.

While fur seals howl, giant petrels strut and growl. And high on the smooth and rising inland plain a hundred thousand king penguins whistle and wail and the blue glacier hanging over creaks and cracks. It is the loudest place on Earth it is, Pandemonium! There is no peace here. There is no rest here.

Only the carrion lying on the beach is silent. A silent which, in that fatalistic way the Natural World treats such things, the animals ignore. Except for the giant petrels who pay rapt attention.

For the petrels, an unaccustomed feast. Enough for every single one of them. And more. More than the giant petrels could possibly eat in all the long daylight hours that will burn here for weeks to come. And still they fight and cannot give quarter. 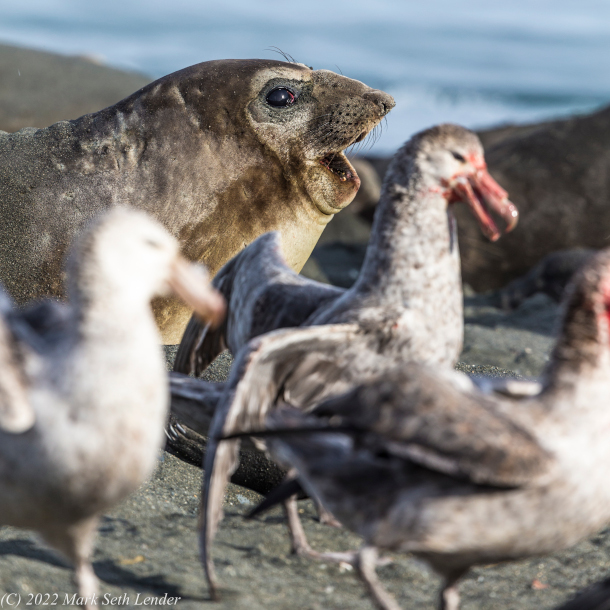 The glare of his eye is blue fire. The mantle of his face a red banner. The terrible hook of his beak precedes him, his webbed feet end in claws that knead and grab and hold his place that none can dislodge him. None dare approach him.

Except for the one who creeps - and bites him! From behind!

And so it begins.

Up the shore and down the shore the two giants battle, on and on, while others feast. Too closely matched; one cannot claim victory nor the other admit defeat. Each is consumed only with his challenger, they have no eyes or ears or taste for anything else. It is, endless.

An elephant seal begins to bark at them. They have crossed and crossed again almost on top of her.

She barks louder; her brow furrows.

They do not ignore her (they do not even see her).

She barks, they fight (you would think they are deaf).

And then, she has had, enough. She grasps the nearest one by his wing with her mouth full of teeth and all the heavy weight she commands. The petrel continues against his adversary. As if he does not feel it. As if he doesn’t even know. She must have held back. Her mouth too soft. Her grip too shallow. For an instant she lets go and again, takes him, this time from the front of the wing where the flesh is tender about the bone and pulls him to the ground.

And again she lets go...

The only mark on the giant petrel is her spittle where it moistened and ruffled his feathers. He and his adversary resume but take their fight away from her.

Which is what she wanted.

Special thanks to Destination Wildlife