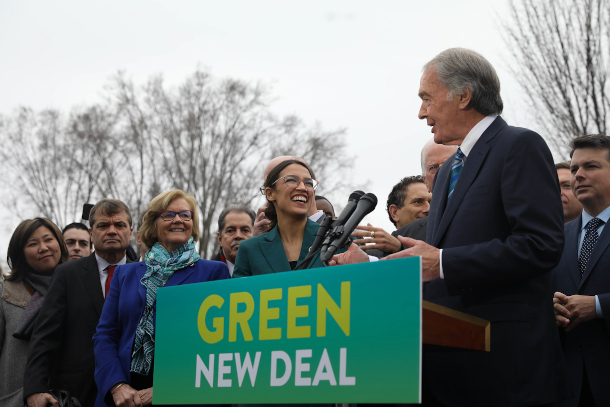 The 2022 Inflation Reduction Act contains billions of dollars aimed directly at addressing environmental and climate injustice. Democratic Senator Ed Markey of Massachusetts was one of the architects of those provisions and joins Host Steve Curwood to discuss how to ensure low-income communities and people of color can access those funds and programs.

While the climate emergency and related fossil fuel pollution affects us all, low-income communities as well as people of color bear far more than their fair share of the negative impacts. These range from deadly summer heat in public housing linked to redlining, to higher asthma, cardiac problems and cancers related to unequal proximity to polluting highways and fossil fuel operations. Thanks to progressive House Democrats who called for a Green New Deal, the recently passed Inflation Reduction Act contains billions of dollars aimed directly at addressing environmental and climate injustice. Democratic Senator Ed Markey of Massachusetts was one of the architects of those provisions, and he joins us now. Welcome back to Living on Earth, Senator.

MARKEY: Great to be with you. It's an important time, obviously, for the climate.

CURWOOD: How much do you consider the Inflation Reduction Act to be a "New Deal"; the beginning of a new deal, at least?

MARKEY: It is a new deal. The Waxman-Markey bill passed the House of Representatives 219 to 212 in June of 2009. But then it died in the Senate, because 60 votes were needed in order to get it passed, and it stalled out at about 55 votes. The difference between 2009 and today is that by using the reconciliation process in the Senate, we were able to get it passed with 50 votes, and then Vice President Kamala Harris breaking the tie. So we don't need 60, we only need 51. And the second thing is that after Alexandria Ocasio-Cortez and I introduced the Green New Deal in February of 2019, it unleashed a movement of young people especially, age 18 to 34, all across this country, who made it very clear that their generation had been let down by the preceding generations. And that they wanted, yes, an identification of the problem; they wanted the technologies to solve the problem -- wind, solar, all-electric vehicles, battery storage technologies, new transmission systems -- but they wanted it done with environmental justice at the heart of it. So in a way, the 2009 bill was a down payment on the Green New Deal; although we didn't get it passed, it just, you know, laid out the framework to get it done. But then we finished the job here; well, we began to finish the job, to make sure that we get the communities who have been most adversely affected historically, the help that they need. The jobs, which they should have as well, as part of the solution. So this bill says, very simply, one, there will be a dramatic reduction in greenhouse gas. Two, we will create, according to the University of Massachusetts, upwards of 9 million new jobs. And third, that we do it with environmental justice, to make sure those communities historically left out are front and center. And young people in our country are leading us in that direction. And because of that, I have confidence, you know, that this bill finally, once and for all, will do it right.

CURWOOD: So the Inflation Reduction Act establishes a national climate bank, I think there's, what, $27 billion there to spur investment in projects that reduce global warming emissions. To what extent are disadvantaged communities going to be able to benefit from this green bank?

MARKEY: Yeah, and that's a great point. In the Waxman-Markey bill of 2009, we were able to include a climate bank, a green bank. So we have in this bill, now signed by the President, a $27 billion Greenhouse Gas Reduction Fund, a green bank, to create a program in which, to begin with, $15 billion will be targeted towards environmental justice communities. And also, I was able to get money along with Congresswoman from Missouri, Cori Bush, $30 million of funding for environmental justice mapping, so that we will be able to identify vulnerable communities that we need to invest in the most.

CURWOOD: Let me ask you a question and use the word "infrastructure," but in a different way. And what I mean is, in disadvantaged communities, who are the folks who are going to be able to understand the requirements to get this funding, indeed even help shape the requests for proposals, and then be able to write proposals so that these disadvantaged communities can get the money? I mean, one reason that richer places get the money is they have, you know, lawyers and consultants and such who know how to play the government game.

MARKEY: Well, yes, there's going to be a lot of wealthy constituencies in the country who are going to see this and all want to dip their straw into it. But what we have done is include $7 billion in grants for technical assistance for zero emissions technologies in disadvantaged communities. I think that's going to be something that, for example, John Podesta in the White House will be able to coordinate nationwide, that is, to ensure that the administration has direct outreach to those kinds of communities. It will have to be a massive grassroots effort to ensure that we go to where these most vulnerable communities are, and to meet them there. But I think that's why naming John Podesta as, essentially, the person overseeing the implementation of the $369 billion is so essential, because he played that role in the Clinton administration. He played that role in the Obama administration. He is somebody who understands how the federal government works across all agencies. And we're going to need discipline to ensure that each agency takes their part of this bill and targets those communities who have historically been most victimized by energy and environmental policy in our country.

CURWOOD: Yeah, so Senator, talk to me about the air quality monitoring money that's in the Inflation Reduction Act. I think it's about $236 million. Why is it key for disadvantaged communities to know what they're breathing, and how can that translate into cleaning up the air?

MARKEY: You know, Chelsea, Massachusetts is a great example of a community that actually never had air monitoring equipment in it until Congresswoman Ayanna Pressley and I advocated for, lobbied for, the EPA to install that equipment in Chelsea to monitor the impacts of pollution, on a community which is almost exclusively minority. I think that has to be a big part of what our goal is in implementing this bill, it is to make sure that as we dispense this funding, that the environmental justice mapping provision then ensures that there is a whole-of-government approach to find and to fix the climate harms in frontline communities. But that's going to require, you know, again, that we help those communities to be able to apply for these grants. 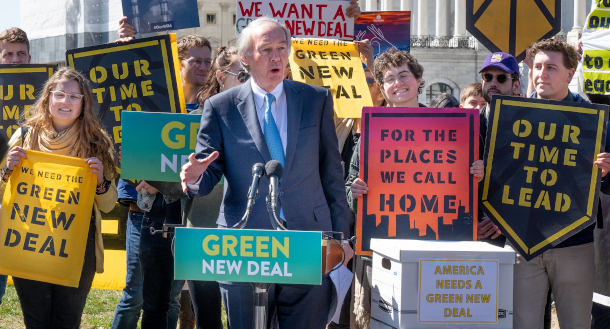 CURWOOD: I'm glad you mention Chelsea, Massachusetts; as I understand it, not only does Chelsea have some of the most polluted air in Massachusetts, but it's got a poverty rate, what, about 20%? Looking ahead, how will you measure success in a place like Chelsea?

MARKEY: The goal has to be that because we know that air quality is still worse in historically redlined communities, that it's unacceptable. And we just have to ensure that we focus on a Chelsea, on a Lawrence, on a Brockton, on a Springfield to make sure they get the help that they need in order to be able to qualify for these grants, because we know the problem is there. For example, in Chelsea, idling diesel trucks by the scores in that community lead to much higher levels of exposure to pollution. They already have historically high asthma rates, which then unfortunately contributed to higher levels of COVID because they were both lung-related diseases. So ultimately, climate justice is going to be intersectional: racial justice, economic justice, social justice, health justice. And that's why this is important in Chelsea, because it's a perfect example of all of these problems coming together. And environmental issues are at the heart of all of it.

CURWOOD: Senator, I want to ask how you feel about all of this. I think it was back in 2008 that you led a special House Committee to look at climate disruption; and you and Henry Waxman got together and with Democratic votes, were able to get through your plan through the House. It did get tripped up by the filibuster in the Senate in 2009. You started that effort how many years ago? How do you feel now that the Inflation Reduction Act has finally been passed?

MARKEY: Well, sometimes you can be right, but too soon. So the bill that ultimately was killed by the fossil fuel industry in the Senate in 2009, it would have gotten us very close to where we're going to be in 2030. And we would have got there a lot sooner. But the way I view these issues is, politics is not for sprinters. It's a marathon. You have to stick with it. You have to have the courage of your convictions. And ultimately, our belief in wind and solar, in all-electric vehicles, has been confirmed. There were only 2,000 megawatts of solar in the entirety of the United States in 2009. In 2021, there were 24,000 megawatts of solar deployed in one year! There were only 2,000 all-electric vehicles in 2009. Today, every other ad on TV, watching the football games over this past weekend, were for some new company's new all-electric vehicle that they're trying to sell. So we have made a tremendous change in our country. And a lot of it actually came from Waxman-Markey even though it was not successful; it did change the whole discussion in the country; automotive industry, utility industry, they realized change was going to take place. So this is not the bill I would have written. But it's the bill we need, to start the process of the Green New Deal, in order to ultimately finish this project and be the global leader that we have to be. If we didn't have this, China, India, Brazil, they would just sit on the sidelines. So you cannot preach temperance from a barstool. So we need this in order to go to the rest of the world later on this year and say, “This is what we're doing. What's your plan?” And if we did not have this bill, there could be no credible plan which the United States could present in Egypt in November of this year.

CURWOOD: Ed Markey is the United States Senator from Massachusetts, he spoke to us from Washington D.C.


More on the Inflation Reduction Act from Senator Ed Markey