Although leopards are often regarded as nocturnal animals, it’s not uncommon for visitors of the Maasai Mara on the banks of the Olare Oruk River, to see them during the day. (Photo: © Mark Seth Lender)

Young leopards may look like formidable hunters, but they still have a lot to learn. In the Maasai Mara savannah, on the banks of the Olare Orok River, Living on Earth’s Explorer in Residence Mark Seth Lender tracked one young leopard’s learning curve.

Leopards are the only big cat species that live in rainforests as well as dry regions, and in either setting young leopards may look like formidable hunters but they still have a lot to learn. In the Maasai Mara savannah, on the banks of the Olare Orok River, Living on Earth’s Explorer in Residence Mark Seth Lender tracked one young leopard’s learning curve.

LENDER: The Cat in the Spotted Coat is awake.

And opens his mouth.

So the long canine teeth show.

A comfortable yawn that ends with that little cat hiss in his breath as the jaws click shut. All the while, walking, along, the irregular lip of the gorge.

He sniffs the ground (eyes closed) and sees, displayed on the screen of his mind, things no human mind’s eye has ever seen: 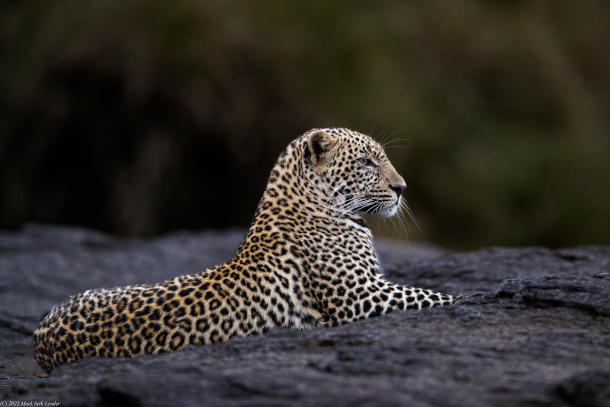 Who and What came this way and When in the dimension of Time. And by a lingering trace of sweat and the odor of the skin, how thirsty they were. Several paces further on he stops again, at a scuffmark in the dust, looking, taking note. Here that Very Same Animal went into the ravine. Cat recalls the water hole along the direction of the creature’s travel. Ah. Yes. A place to wait some hours from now as the darkness pours in. On he goes, all the while gaining in knowledge and experience.

For this Young Leopard there is still learning to do and the growing up that goes with it.

Now in a clump of long grass he finds where one of his own kind has left their deliberate mark. Which holds his full attention. Inhaling like a Sommelier high against the palate he discerns, terroir, the maker’s finesse, and whether ready and good or not yet prime. And other things unimaginable to you.

He licks his lips.

He licks between his toes.

Then follows the slope to the bottom.

And up the other side.

And pads along through the dried-out brush onto the flat of rust and plumb colored granite of the outcrop.

Right in front of me.

Cat in the Spotted Coat wraps his tail around his soft cat feet and looks about. Lies down. Rolls over on his back. Yawns his Big Cat Yawn and looks at me upside down. “Pet me. Stroke my head. Scrrrrratch behind my ears. Rub my belly and I’ll purrrrrrr for you. Pay no attention to the equipment behind the curtain of my velvet black lips. Ignorrrrrre the razors called claws at the end of my paws, I only want - ” 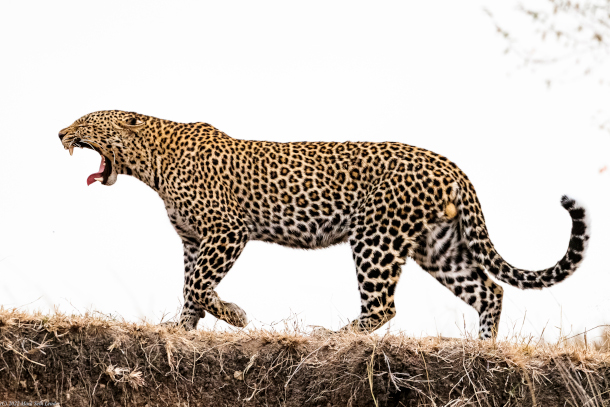 A young leopard yawning as he treks through dry brush in the Maasai Mara National Reserve in Kenya. (Photo: © Mark Seth Lender)

Cat in the Spotted Coat is suddenly transfixed:

Blue wildebeest, two knots of three at less than a hundred yards.

He stands, and shrugs low and in that stealthy cat walk pours himself underneath my truck. To watch. To plan his imagined SNEAKATTACK!

While the blue wildebeest turn their heads. And stare right back. The forward posture and their ready gaze making unmistakable reply:

“Who do you think YOU’RE kidding!”