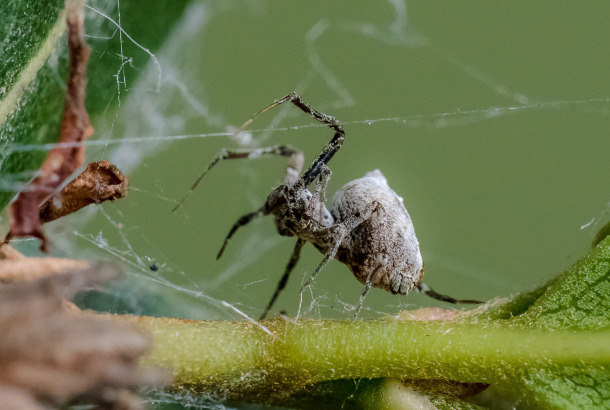 Male Philomena prominens leap away from females after mating to avoid being eaten. Pictured is a spider in the Uloborus genus, the same genus as P. prominens. (Photo: Robert Whyte, Flickr, CC BY-NC-ND 2.0)

Sexual cannibalism, in which a female eats a male after mating, is common in many spider species. Living on Earth’s Don Lyman reports on male Philoponella prominens, who have evolved to catapult away from females post-copulation to escape their hungry jaws.

In a minute, the climate debt crisis but first this note on emerging science from Don Lyman.

LYMAN: After mating, male Philoponella prominens, an orb-weaving spider species, leap away from cannibalistic females at speeds of up to nearly three feet per second, researchers recently reported in Current Biology. Some spiders jump to capture prey or avoid predators, but the researchers said that P. prominens is unusual among spiders, because males leap away from their mates to avoid being cannibalized by the female spiders after mating. The females of many spider species eat their male sexual partners after mating. According to researchers at Miami University in Ohio, the reason for female spiders cannibalizing male spiders appears to be a factor of size. In spider species where males are small, they are more likely to become prey because they’re easier to catch. The larger female spiders eat their smaller male mates because the females are hungry and because they can catch them. Scientists studying P. prominens’ mating behavior observed that males always seemed to catapult away from the female, but the males moved so fast that ordinary cameras couldn’t capture the details of the males’ leaps to safety. High-resolution video recorded the male spiders’ speed from around one foot to three feet per second, the researchers reported.
Out of 155 successful matings that the researchers observed, 152 males leaped to survival. The three male spiders that didn’t leap were eaten by the female spiders. The scientists also used an experimental design that prevented 30 male spiders from jumping to safety after mating. All 30 of those experimental males were cannibalized by their mates. P. prominens are native to Asian countries, including Korea and Japan, and are a social species. Up to 300 of the spiders may come together to weave a colony of adjacent webs, but female P. prominens appear to leave their neighbors alone and strictly cannibalize their mates. That’s this week’s note on emerging science. I’m Don Lyman.