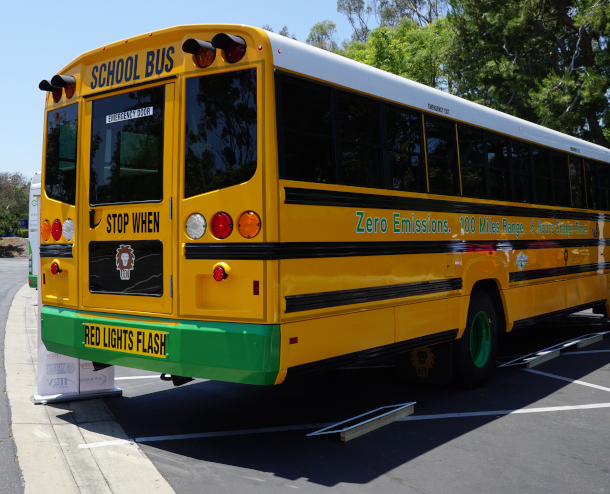 On this week's trip beyond the headlines, Environmental Health News weekend editor Peter Dykstra and Host Bobby Bascomb examine the $1 billion now available to help low income school districts purchase electric buses. Then, the two discuss a silver lining from Vladimir Putin's invasion of Ukraine: the prediction of a faster transition to global clean energy. Finally, Peter and Bobby take a look through the history books at the life and death of a chemist who invented two tiny compounds with huge consequences.

BASCOMB: Well, it's time for a trip now beyond the headlines with Peter Dykstra. Peter is an editor with Environmental Health News. That's EHN.org and DailyClimate.org. Hey there, Peter, what do you have for us this week?

DYKSTRA: Hi, Bobby, there's a piece of the Biden Inflation Reduction Act. It's about a billion dollars to buy new electric school buses for primarily low-income school districts across the country. And it's a two for one because not only would it be another arrow in the quiver of clean energy and electric buses, electric vehicles, but it would also deal with diesel exhaust from those buses. That is a major impact for asthma in low-income parts of the US.

BASCOMB: Yeah, it seems like a win-win. I mean, think of the health of children who won't be breathing in diesel fumes, and, of course, the, you know, reduction in greenhouse gas emissions. And too, you know, it seems like a no-brainer to me. I mean, buses aren't going far, you know, they don't have to worry about running out of a charge, and you have the infrastructure all in place. It seems like a great idea.

DYKSTRA: Right? It's something that's easily done. A billion dollars doesn't hurt. But the kind of startup money like that, hoping that it's a successful project, is something that can give a goose to purchasing electric school buses everywhere.

BASCOMB: Yeah, exactly. Well, what else do you have for us this week?

DYKSTRA: A benefit, if anything out of war can be a benefit, from Putin's invasion of Ukraine, is that the International Atomic Energy Agency says that the war is actually going to speed up, not slow down, the development of clean energy across the world.

The International Energy Agency forecasts that Russia’s invasion of Ukraine and the subsequent energy crisis is more likely to speed up the global transition to clean energy, rather than slow it down. Pictured above is Perovo Solar Park in Ukraine. (Photo: Activ Solar, Flickr, CC BY-SA 2.0)

BASCOMB: Wow. Well, I mean, war is awful, of course. But if there is a silver lining, we certainly need to move quickly towards more clean energy. You know, I have to think that that's a consequence that Vladimir Putin probably wasn't expecting when he invaded Ukraine, you know, especially given Russia is so dependent on fossil fuel exports for their economy.

DYKSTRA: It is and Putin had looked toward Russian natural gas, Russian oil, as the means he could dangle in front of the world's economy and energy infrastructure to have us, basically in the thrall of fossil fuels, Russia being a major player, and that's something that may not work quite as well as he suspected it would.

BASCOMB: No. Well, we hope so anyway. Well, what do you see for us from the history books this week?

DYKSTRA: November 2 1944, is the date of the death of a rockstar scientist from the early 20th century. Thomas Midgley invented two things that were viewed as breakthroughs in chemistry in the early half of the century, that we later found out were huge problems instead.

BASCOMB: Hmm. All right. So what did Thomas Midgley invent then?

DYKSTRA: The first thing is he invented the use of tetraethyl lead as a gasoline additive. It helped conquer engine knock, which was a big menace to engines running smoothly in automobiles. And his second thing was he invented chlorofluorocarbons. In their use of coolants, chlorofluorocarbons became a breakthrough, not only in refrigerants, but an air conditioning as well. And as we later found out, chlorofluorocarbons, CFCs, are also a major cause of destruction of the ozone layer. 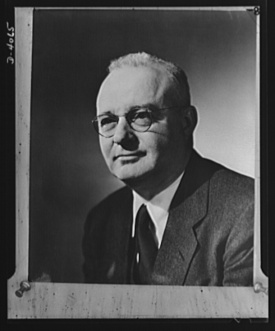 BASCOMB: Mmhmm. And of course, we know now that leaded gasoline is terrible for air quality, reduced IQ in children that were exposed to it. I guess, file those inventions under "seemed like a good idea at the time", huh?

DYKSTRA: Well, “what could possibly go wrong" file is the other place they belong. And of course, both of these problems were later conquered by the Montreal Protocol, which has cut down drastically on the use of CFCs and by the banning in nearly all nations of the use of lead in vehicle fuels and gasoline.

BASCOMB: All right, well, better late than never, I suppose. Thanks, Peter. Peter Dykstra is an editor with Environmental Health News. That's EHN.org and DailyClimate.org. We'll talk to you again real soon.

BASCOMB: And there's more on these stories on the Living on Earth website. That's LOE.org.