Breakthrough for Loss and Damage 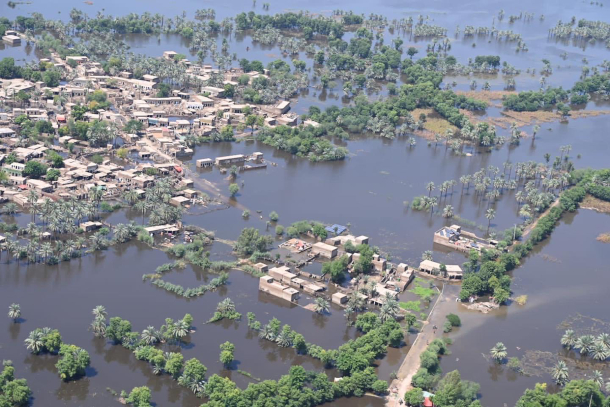 An aerial photo of flooded Sindh province in Pakistan in August 2022. Pakistan is a “poster child for impacts” from climate change, Alden Meyer says, since losses and damages from those floods could total $30 or $40 billion. (Photo: Ali Hyder Junejo, Flickr, CC BY 2.0)

One bright star from the recent UN climate treaty talks in Egypt (COP27) is the agreement for wealthy nations to create a fund to pay for “loss and damage” from impacts of the climate disruption to lower income countries. But no money has been provided yet to stricken nations and there are still plenty of details to be worked out. Sindra Sharma, the global policy lead for Climate Action Network International, joins Host Steve Curwood to talk about the decision and the challenges of the session in Egypt.

As we mentioned earlier, one bright star from the recent UN Climate treaty talks in Egypt is the adoption of provisions that now require affluent nations to pay something to poor nations for loss and damage from climate related disasters. But there are still plenty of details to be worked out. Questions include how much, where banked and who pays? Since CO2 remains in the atmosphere for centuries, the US is most responsible for global warming, having made the biggest portion of human related carbon emissions over time, closely followed by Europe. So, some say the US and Europe should pay, while others say China, which now leads the world with current emissions, should also pay. Such questions are set to be settled at future COPs. Sindra Sharma is the global policy lead for Climate Action Network International, and we called her up in her hotel room in Cairo. I asked her how she feels about finally having this admittedly vague loss and damage language incorporated in the world’s climate treaty.

SHARMA: It's a bit bittersweet. I think it is definitely a big step in the right direction. But it's something that has been delayed and sort of demanded for the last 30 years. So this is why it's a bit bittersweet because it's something that we needed many years ago. And what we have now is, is progress. But we need to make sure that it's progress in the right direction.

CURWOOD: To what extent did the disasters in Pakistan this year affect the discussions? I mean, we saw both record heat and then this crazy flooding, I think a third of the people in Pakistan lost their homes in these floods. What impact did that set of events have on the discussions?

SHARMA: What we saw this year in terms of impacts was really extreme, you know, like, all over the world, the Pakistan floods is one example. But in Sub-Saharan Africa, in the Horn of Africa, you have this ongoing drought, this flooding in numerous places across the globe. The challenge that happened, the complete destruction that happened in Pakistan was always referred to as were the other impacts. And this was really coming from developing countries to show the, the sort of visceral, real-lived experience of what they're going through right now. But it was also acknowledged by developed countries that this is really something crazy. This is really something extreme that we're now experiencing. So that did bring a sense of urgency to the conversations and the negotiations. 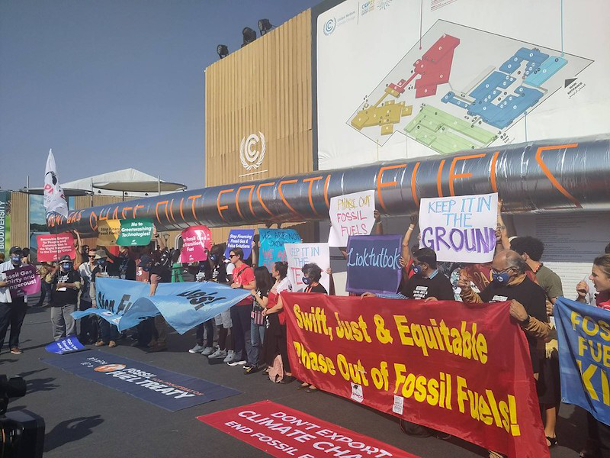 CURWOOD: Now, how soon can developing nations access the loss and damage fund?

SHARMA: That is the million dollar question at the moment. The timeframe of this fund is not very clear. But from the perspective of civil society from G77 and China, who were very united in their demands, it would lead to the operationalization of the fund at the latest by COP29. So then you'd start already having money flowing to those who really need it by COP29.

SHARMA: Yeah, that's two years from now, so that's already late. But we've been waiting for 30 years for this tiny opening that we can now run with.

CURWOOD: How much money are we talking about here in terms of loss and damage?

SHARMA: So in terms of loss and damage, at the moment, the ability to quantify it is actually really difficult, because you're looking at a dimension of a very complex sort of dimension of losses and damages. And that includes non-economic losses, which are just by the name of it as well, not really easy to quantify. So from some of the analysis that's been done, it's between $200 to 380 billion a year, just to address the economic losses and damages. And we can see from the examples as well, from the flooding in Pakistan, from small island states that have lost quantums of their GDP as well from a single extreme event, that this number is a vast underestimate.

CURWOOD: So the non economic losses; what are we talking about here? To what extent is a consider the loss of human life, for example?

SHARMA: Yeah, so that's exactly—non-economic losses includes the loss of human life. It includes health as well, which also can be quantified from, you know, a few studies to look at the impact on work, so on labor as well. And then what's tangible to us, but intangible economically, perhaps, which includes our culture, our sense of belonging, our sense of identity, the sense of community, the place that we bury our ancestors and we call our home, like losing all of that has a huge profound impact on people and being displaced from your communities because of something that you don't have control over, and then you have to journey from one place to the next to the next, and at each of those stages of journeying, you might not be wanted, right? You might be called a refugee, and not associated with the climate impacts that have made you to move. So there's a whole quantum of—of things to consider. 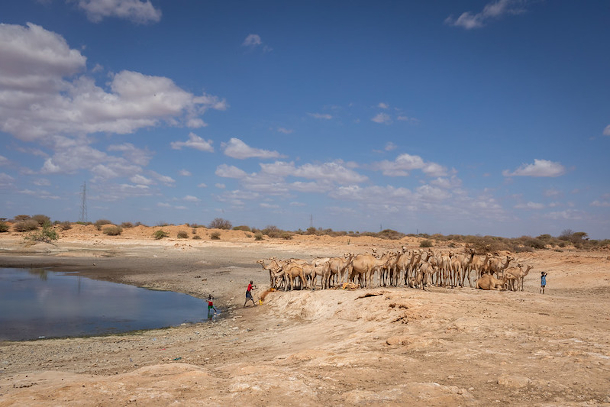 People and animals crowd a water pond in Beda’as kebele in Ethiopia in January 2022. These water ponds become one of the few sources of water when drought hits the Somali Region. (Photo: Courtesy of Mulugeta Ayene, UNICEF Ethiopia, Flickr, CC BY-NC-ND 2.0)

CURWOOD: Sandra, what country are you from? And what sorts of losses and damages has your nation suffered as a function of climate disruption?

SHARMA: I'm actually from Fiji. So I'm from a small-island developing state in the Pacific. And my country has suffered a lot from losses and damages. With every passing hurricane and cyclone season there is always a fear. Is this going to be more extreme than the other? And how will we rebuild when it's too extreme? You know, so, there's also a very steep learning curve as well. So a lot of communities have already started the process of relocation. And we're lucky at the moment that that’s generally relocating your village from closer to the coast to more inland, but that still has had a huge impact. And we're learning from those and putting that into lessons learned and best practice so that we can ensure that when there is no assistance flowing to us that we can help ourselves, basically.

CURWOOD: COP27 came up with a mechanism finally to deal with loss and damage. Yet, this gathering, this UN Climate Summit, didn't do anything more to put the brakes on climate disruption. How do you feel about that? 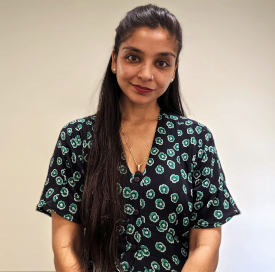 SHARMA: So from my perspective, for me, this COP was extremely unsettling. And it really... it didn't sit right in terms of the process. And I think we need to have a hard-think and be brave around how we can challenge this system that at the moment is broken. You know, this is a climate conference; why would you invite the most amount of fossil fuel lobbyists to a climate conference? And they then influence the outcome of the decision so that we have a weaker decision around the phase out of fossil fuels, which is essential to be able to mitigate climate change to be in line with 1.5 to ensure that we don't have the severity of losses and damages that we see as we go forward, where there's even deeper vested interest in maintaining the expansion of gas, for instance. I mean, it was sold at this COP already in the opening plenary as a clean fuel. So these are solutions that we just cannot anymore, you know, have a focus on but we still seem to be in this cycle of backsliding. So I found this COP really challenging from a human rights perspective. As a Fijian as well, I see that our time is significantly running out. Every second wasted is a second that we can't get back.

CURWOOD: Sindra Sharma is the global policy lead for the Climate Action Network International. Thanks so much for taking the time with us today.

SHARMA: Thanks for having me.